In a developing embryo or a healing wound, communities of cells organize themselves into tissues, undertaking specialized tasks beyond the ability of any single cell to accomplish. These tissues require oxygen and nutrients, as well as a facility to remove metabolic wastes and carbon dioxide. The formation of new blood vessels, known as angiogenesis, satisfies these needs. In a similar manner, a growing tumor, an aggregation of cancer cells, also requires access to oxygen, nutrients and waste disposal. Beyond a certain size, typically 1 mm, diffusion alone is insufficient for providing these necessities; the surface area to volume ratio becomes too low and the developing tumor begins to starve. In response, cancer cells send out signals to the cells of nearby blood vessels, inducing these innocent bystanders to grow extensions to form a supply chain and drainage channels. Thus, cancer cells subvert these normal neighboring cells into playing a key role in driving tumor development. 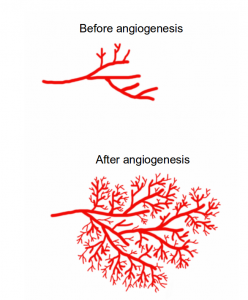 Regulation of Angiogenesis through VEGF

How is angiogenesis regulated? Counterbalancing positive and negative signals circulate in the cellular microenvironment surrounding every cell, respectively encouraging or blocking angiogenesis. These signals include growth factors, which I described previously, the primary angiogenic growth factor being Vascular Endothelial Growth Factor (VEGF). VEGF binds to VEGF receptors found on the surface of endothelial cells, which are cells that line the interior of blood vessels. VEGF causes endothelial cells to first break through existing blood vessels, then migrate towards the signal (i.e. VEGF), grow and replicate and form new blood vessels as directed. Negative angiogenic signals include the prototypical thrombospondin-1 protein, which inhibits the growth and migration of endothelial cells. The binding of thrombospondin-1 to endothelial cells triggers the activation of caspases, leading to apoptosis of the cell, as described previously. Currently we know of dozens of proteins that induce or inhibit angiogensis through similar mechanisms.

How do cancer cells activate the angiogenic switch? Simply put, they change the balance of angiogenesis inducers and counteracting inhibitors in the surrounding cellular environment. The rapid growth of a tumor results in an oxygen delivery problem; cells found towards the inside of the tumor are deprived of an adequate supply of oxygen. These cells are now said to be hypoxic, and activate the hypoxia stress response. The primary response to hypoxia is mediated at the cellular level by the hypoxia inducible factor (HIF). HIF is a transcription factor, initiating the production of other proteins required to mediate the effects of hypoxia. Under typical oxygen levels, a hydroxyl (OH) molecule is added to HIF as a tag for degradation, and HIF levels are kept constantly low as a result. However, during hypoxia, this degradation halts and HIF accumulates within the cell. The accumulated HIF transports into the nucleus of the cell where it induces the expression of numerous target genes, including (you guessed it) VEGF. This increase in VEGF results in shifting the balance of angiogenesis inducers and inhibitors, thereby switching on angiogenesis. 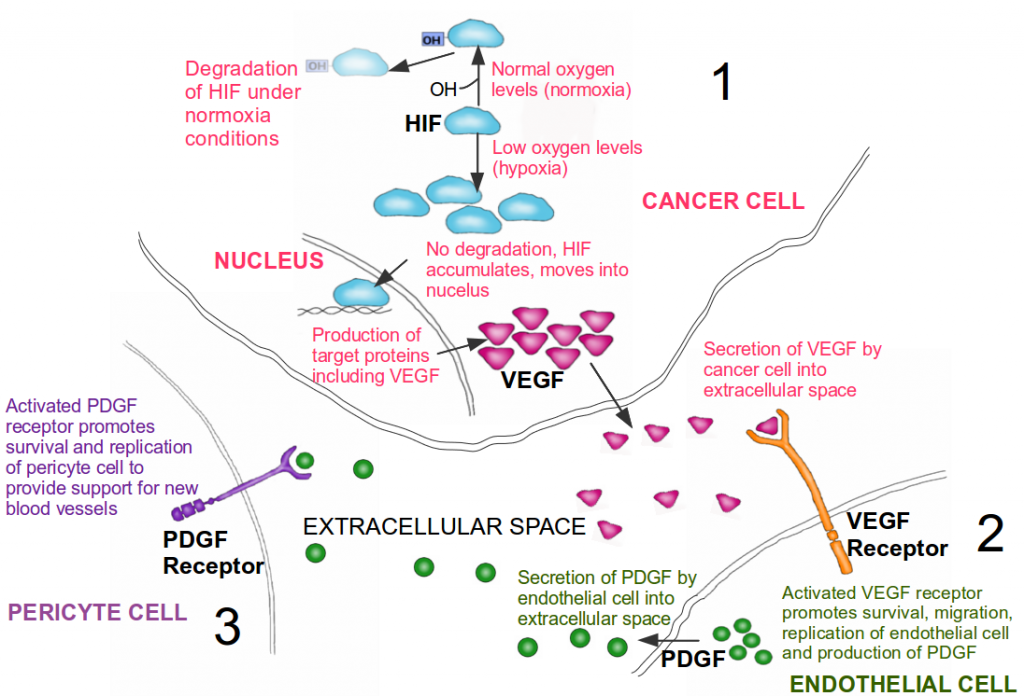 Activation of angiogenesis. 1. In a cancer cell, under normal oxygen conditions (normoxia) the HIF protein has a hydroxyl (OH) group added to it; this tags it for degradation. Under low oxygen levels (hypoxia), HIF is not degraded and it accumulates within the cell. HIF then moves into the nucleus where it activates the production of proteins involved in the hypoxia stress response pathway, including the growth factor VEFG (pink triangles). 2. VEGF now moves from the cancer cell into the extracellular environment where it binds to VEFG receptors on the surface of endothelial cells. This binding results in the survival, migration and replication of endothelial cells, ultimately promoting the formation of new blood vessels (i.e. angiogenesis). Endothelial cells also produce PDGF (green circles). 3. PDGF is secreted by endothelial cells into the extracellular space, where it binds to PDGF receptors found on the surface of pericyte cells. This binding results in the survival and replication of pericyte cells, which in turn lend structural support for the newly formed blood vessels. A cancer cell can thus subvert innocent bystander cells for its own needs. Image credit: Buddhini Samarasinghe

The key to angiogenesis is VEGF, and it comes as no surprise therefore that VEGF production is tightly regulated. The activation of cancer-causing proteins (oncoproteins) such as Ras results in an increase in VEGF production. Cancer cells also stop producing angiogenesis inhibitors. Thrombospondin-1, a potent angiogenesis inhibitor, is under the positive control of P53, a key protein involved in protecting our cells from cancer. Consequently, the loss of P53, found in more than half of all cancers, causes thrombospondin-1 levels to fall. It is an elegant system of subversion in which cancer cells hijack our normally tightly regulated pathways to serve their own ends.

How important is angiogenesis for cancer progression? Many experiments have shown that proteins which block the action of VEGF were able to impair the growth of tumors in mice. Conversely, the addition of pro-angiogenic factors such as VEGF encourage tumor growth. This raises the obvious question of whether we could use these anti-angiogenesis factors (which occur naturally in our bodies) to fight back. Indeed, many such anti-angiogenesis factors are currently undergoing clinical trials in cancer patients. Avastin was the first commercially available angiogenesis inhibitor; it binds directly to VEGF and prevents it from binding to the VEGF receptor. Also of interest are endostatin, angiostatin and the previously mentioned thrombospondin-1. Small molecule drugs that can inhibit VEGF are in clinical trials; notably sorafenib, axitinib and pazopanib.

In normal tissues, communities of cells instruct each other to grow through signaling pathways. The tumor microenvironment hijacks these selfsame pathways to divide and grow uncontrollably. A cancer cell cannot function in isolation. It is dependent on its surrounding cells, the innocent bystanders that faithfully respond to the malevolent signals that cancer cells use to achieve their uncontrolled growth. The angiogenesis within the context of a tumor is a warped, twisted version of what it should be; the vessels are convoluted and excessively branched. They are distorted and enlarged, with erratic blood flow and leakage. Tumors are messy and bloody, a result of the angiogenesis that sustains them. Angiogenesis in a cancer is a perversion of a normal cellular process, a perversion that is an essential requirement for the development of cancer.

Reprinted with permission of Buddhini Samarasinghe and Scientific American, October 18, 2013