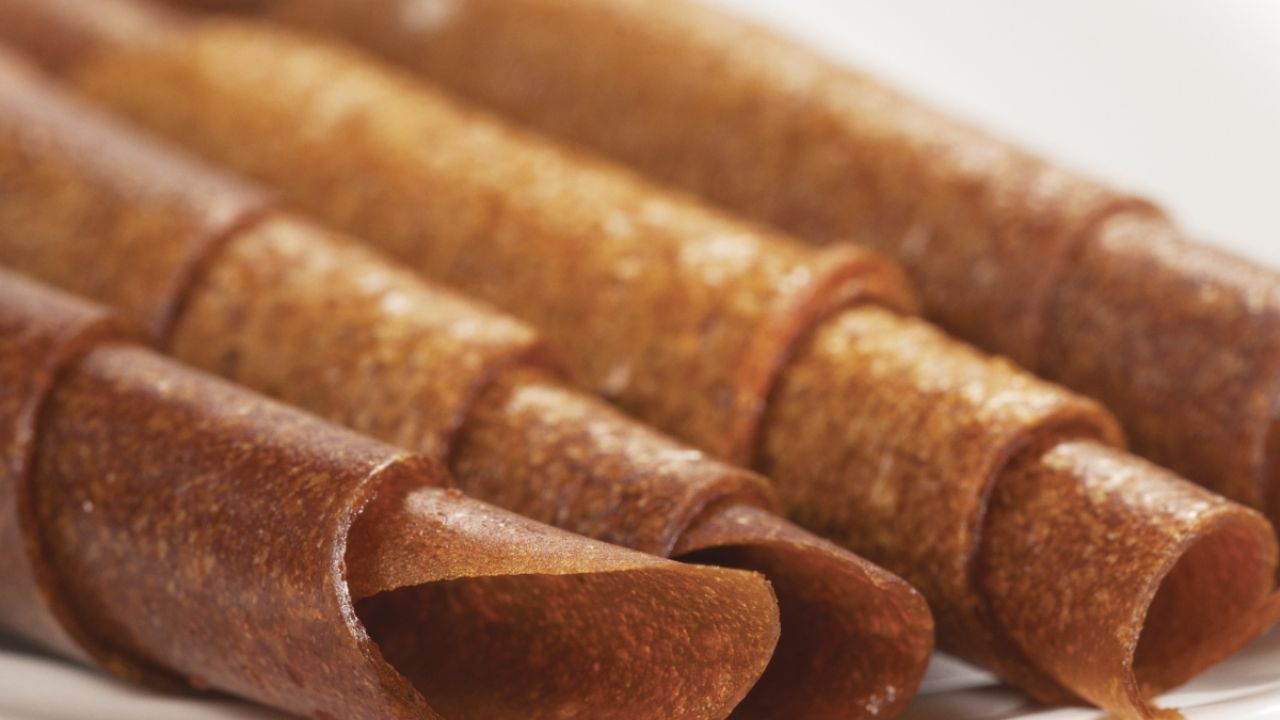 When parents and caregivers herd kids out the door for an outing, they typically grab snack food on the way. And one of the most convenient is a product kids love – fruit leather.

But it turns out certain types of this popular children’s food contain residues of pesticides, sometimes in high concentrations. These chemicals can lead to a wide variety of serious or even fatal health problems, such as cancer. Kids can be especially sensitive to pesticide exposure, because their bodies are still developing.

In 2021 and 2022, EWG commissioned independent laboratory tests of 37 samples of organic and non-organic, or conventional, fruit leather from 10 brands and 30 samples of dried fruit from 16 brands.

The results affirm what we’ve said for a long time: Whenever possible, given your budget and other considerations, choose fruit that is both organic and fresh – not dried. And if you buy conventionally grown fruit, stick with items on our Shopper’s Guide to Pesticides in Produce™ Clean Fifteen™.

A piece of fruit leather is no doubt more nutritious than lots of other snack foods – Twinkies, for instance. But fruit leathers can contain high concentrations of pesticides.

That’s because the agricultural chemicals are sprayed on the fruit from which they are made. Different types of fresh fruit vary considerably in the amounts of residue they contain. For instance, our 2022 Shopper’s Guide to Pesticides in Produce found more than 90 percent of samples of strawberries, apples, cherries, nectarines and grapes tested by the Department of Agriculture and Food and Drug Administration had residues of two or more pesticides.

Apples are a prevalent ingredient in fruit leather products – in fact, they were the first ingredient in many of the different flavors we analyzed. Fresh apples typically contain high amounts of pesticide residue, according to our Shopper’s Guide. The fruit leather we tested include those from well-known brands: 365 Whole Foods Market, Bear, Bob Snail, Good & Gather, Stretch Island, That’s It and Trader Joe’s.

Conventional fruit leather containing certain other fruits are also best avoided. Fresh, conventionally grown strawberries rank annually at or near the top of our Dirty Dozen. Apples, grapes, cherries, peaches and pears were all on our 2022 Dirty Dozen.

Organic produce can sometimes contain traces of pesticide residues because of contamination from nearby conventional fields or from some other point in the production process. So some organic fruit leather may have pesticide residues, too.

Dried fruit – even if not organic – may be a good alternative to fruit leather for people concerned about pesticide residues. Conventional dried cranberries, dates, figs, mangoes and prunes had non-detectable levels of pesticides, according to the tests we conducted of 30 dried fruit products in 2021. The highest levels of pesticides were found on dried strawberries, raisins, cherries and apples.

But the process of dehydrating otherwise nutritious fresh fruit to make snacks such as fruit leather drastically increases the concentration of natural sugar the snack contains – far more than you’d consume in a similar-size serving of its fresh counterpart. We recommend you check ingredients on labels and choose products that are less processed, avoiding fruit leathers and dried fruit that contain added sugar and unhealthy food additives like flavor enhancers, food coloring and corn syrup. 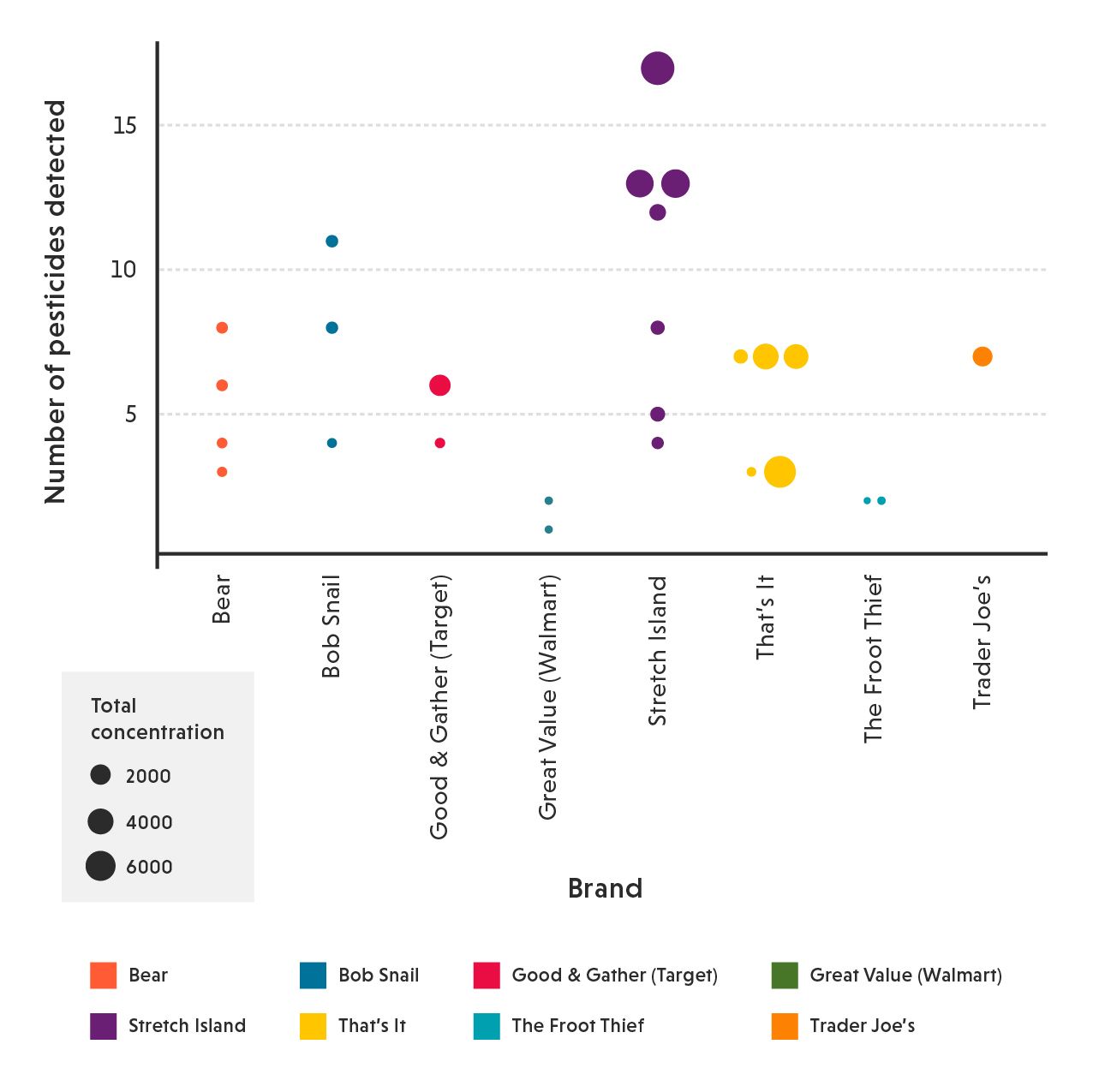 How we measure pesticide residue

One way to measure the amount of pesticides in a food product is by looking at how many separate pesticides can be detected in it. Our tests found that conventional fruit leather may contain residue from the highest number of pesticides.

That was the case with samples from Stretch Island and Bob Snail, each of which had at least one sample that contained residues from more than ten different pesticides. One sample of Stretch Island Raspberry Fruit Leather contained 17 pesticides – the most of all the leathers tested. (See Figure 1.)

Another way to measure the pesticides a product contains is by analyzing the total amount of pesticides, or “total pesticide concentration.” Samples from That’s It, Stretch Island and Trader Joe’s contained the highest total concentration of pesticides, on average – indicated by the size of the bubble in Figure 1. 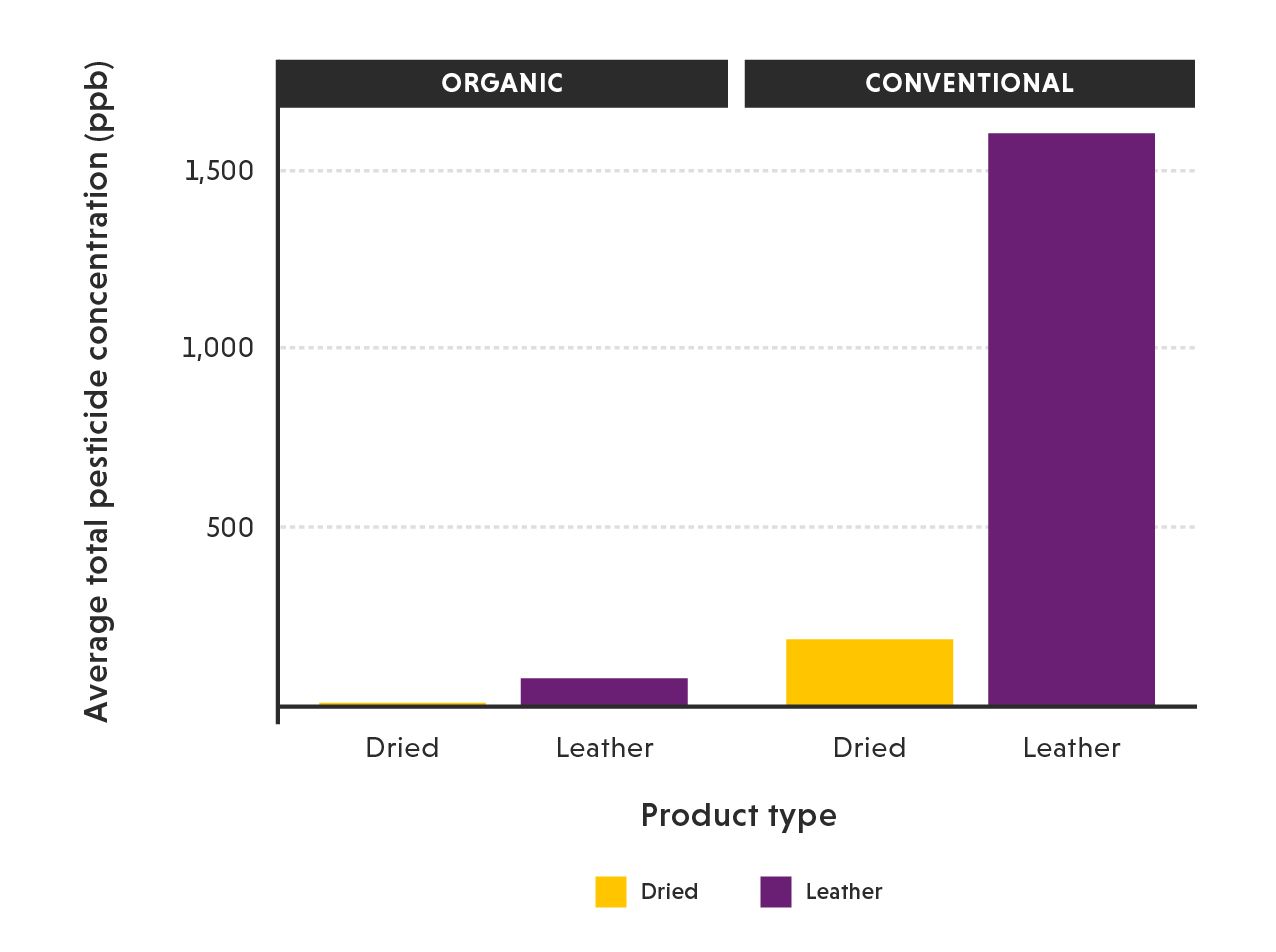 In our 2020 report on dried fruits, we found huge amounts of pesticide residue on raisins tested by the USDA. Nearly every sample – 99 percent – tested positive for two or more pesticides. On average, raisins were contaminated with at least 13 types of pesticides. One sample had residues from 26 different pesticides.

The risks of consuming pesticides

There are many kinds of pesticides, developed to kill insects, weeds, small mammals and fungi. According to our analysis, the four most frequently detected – they were found in almost half the products – were the fungicides pyrimethanil, fludioxinil and thiabendazole, and the neonicotinoid insecticide acetamiprid.

Exposure to pesticides can be linked to cancer, hormone disruption, changes to the reproductive and nervous systems, kidney and liver damage, and birth defects. Other developed countries ban – or regulate more strictly – many of those used in this country.

The American Academy of Pediatrics stated in 2012 that children are uniquely vulnerable to harm from the potential toxicity of pesticide residues. It cited research connecting early-life pesticide exposure to pediatric cancers, reduced cognitive function and behavioral issues.

Federal regulations should set a higher standard for foods consumed mostly by children. A law passed in 1996 requires the Environmental Protection Agency to add a tenfold margin of safety to legal limits for pesticides in food. But a 2020 EWG analysis found the margin of safety wasn’t applied to EPA safety standards for nine out of 10 of the most common pesticides.

About 90 percent of pesticide use nationally is agricultural, with the greatest exposures faced by people who work in the farm fields and who live, work and go to school in nearby communities.

EWG recommends choosing organic whenever possible. Pesticides are commonly applied and detected on conventional produce, 70 percent of which contains residues. But most of these chemicals may not be used on organic produce, and studies show that switching to an organic diet is an effective way to quickly reduce one’s exposure to pesticides.

But our Clean Fifteen is a great place to find conventional produce with low pesticide residues.

We recommend that anyone concerned about their kids’ pesticide exposure read labels of fruit leather and other dried fruit products carefully. 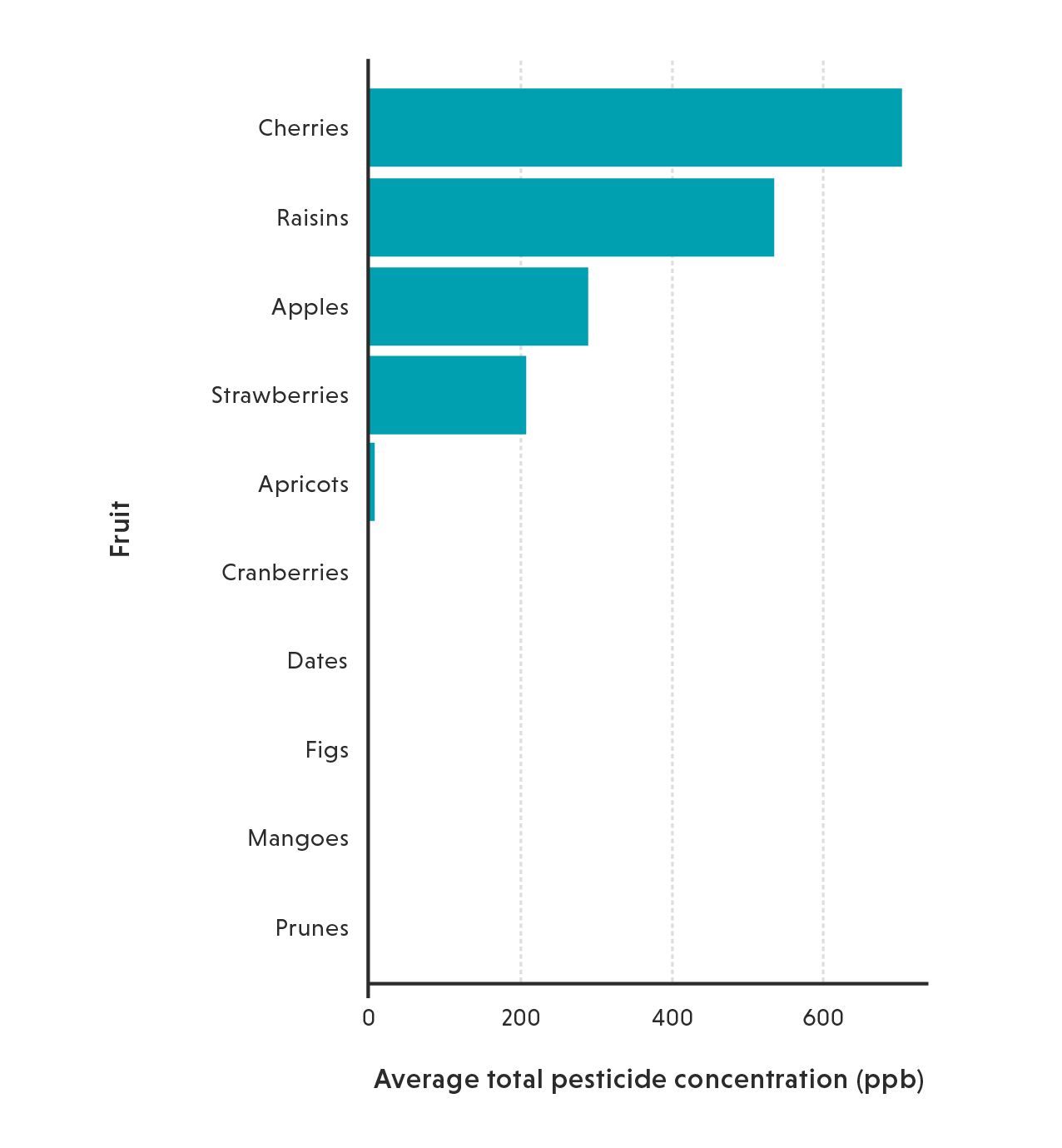 Note: Each concentration shown is the average of two samples for each type of fruit.

We tested 37 samples of fruit leather from 10 brands, both organic and conventional, both store and independent brands. Samples were purchased in the Washington, D.C., area in 2021 and 2022. Pesticide tests were conducted by Anresco Laboratories of San Francisco (https://anresco.com/services/food-testing/), which is accredited by the state of California.

By
Sydney Evans (EWG)
Ketura Persellin (EWG)
September 15, 2022
We’re in this together 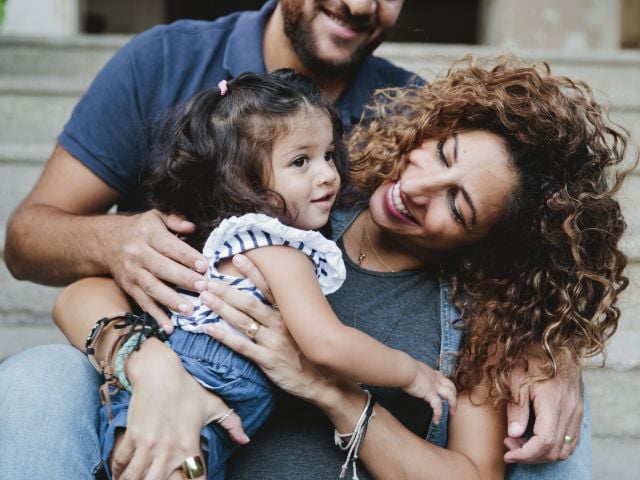 From reproductive health to healthy snacks, making the best choices for your family can be overwhelming. We've got the research and expertise to help.