Feeding the world: The unfulfilled promise of genetic engineering

Seed companies and proponents of industrial agriculture regularly claim that genetically engineered crops hold great potential to improve yields and stave off crop failures caused by crippling droughts and climate change. Yet the evidence of the past 20 years shows that they have fallen short of delivering these promised benefits.26

The debate over crop yields

In Africa, GE crops have been unable to compete with traditionally bred varieties. In the United States, they have increased the use of Monsanto’s Roundup herbicide, which led to the appearance of resistant “superweeds.”27 And in 20 years of U.S. experiments with GE corn and soy, they have not increased yields.28 Recent data shows no yield difference between acres growing GE varieties and traditionally bred corn and soy.

One recent paper found that average yields of genetically engineered corn in the United States from 1986 to 2011 were slightly lower than corn yields over the same period in western Europe, where GE crops aren’t grown, although the difference was not statistically significant.28 The paper was led by Jack Heinemann, a professor of genetics at the University of Canterbury in New Zealand.28 More recent data from the United Nations Food and Agriculture Organization29 for 2012 and 2013 (Figure 1) also show that yields are still are not significantly different.30 Similarly, the trend from 1996 (when GE corn was first commercialized in the U.S.) to 2013 shows no significant difference in yield.31 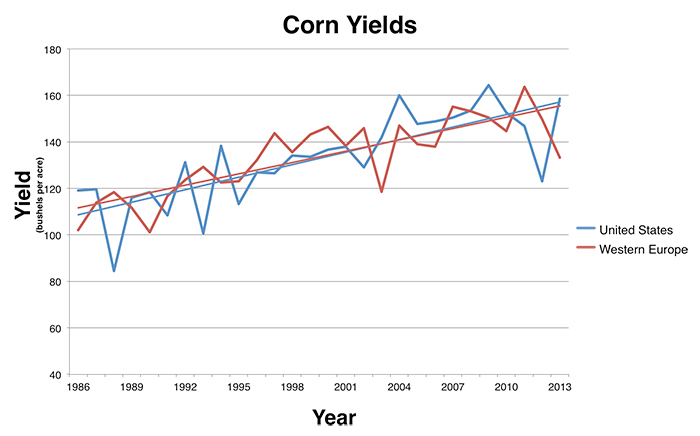 Yield statistics for soybeans tell a similar story. Figure 2 shows no statistically significant difference between the U.S. and western Europe in average soybean yields from 1986 to 2013.32 From 1996 to 2013 there was some divergence in the trend lines, but the differences still weren’t significant.33 Moreover, there is no indication that the rates of US yield improvements accelerated after 1996, when planting of GMO corn and soybeans increased dramatically. 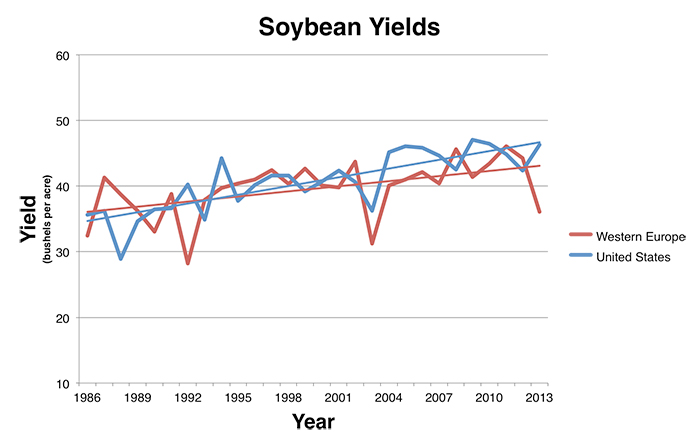 Proponents of GE crops also claim that they will be better able to withstand drier climates, which will be essential to increasing food supplies on a warming planet. But it turns out that traditionally bred crops are outperforming GE crops in places where it matters most.

A recent case study described in Nature News in September 2014 highlighted efforts by the Drought-Tolerant Maize for Africa Project to improve crop yields in dry regions of the continent,8 where drought can reduce yields by up to 25 percent. Since 2006, Nature News reported, researchers at the project have developed 153 new crop varieties using traditional breeding techniques and found that they had up to 30 percent better yields than genetically engineered varieties, even in nutrient-poor soils.8

A great variety of GE crops are being researched and commercialized today, and each may have different social and environmental effects. Genetic engineering’s contribution to higher yields is difficult to disentangle from improvements achieved by traditional crossbreeding and changes in farm management practices. One recent study conducted by agricultural economists at a German University found that overall, genetic engineering has improved yields of certain crops by 22 percent,34 but New Zealand geneticist Jack Heinemann said this meta-analysis did not properly control for confounding factors such as changes in farm management practices.35 Over half of the studies used in the meta-analysis were based on GE cotton grown in India, and researchers at the International Food Policy Research Institute found that the yield increases there were much smaller than seed companies claimed. Increased fertilizer use, improved irrigation and other changes also helped increase cotton yields during this time.36 Controlled field trials would be needed to determine whether these management practices were a factor.

In the United States, widespread adoption of GE corn and soy since 1996 has increased the use of Monsanto’s Roundup, a herbicide that is primarily composed of the chemical glyphosate. From 1996 to 2011, glyphosate use increased by 527 million pounds, or about 11 percent.27 That led to the appearance several species of glyphosate-resistant weeds. In an effort to control these “superweeds,” the biotech industry has been genetically engineering still newer crops that withstand more toxic herbicides, posing new environmental and human health threats to farms and surrounding areas.

Funding support for this report was provided by the Just Label It campaign.