Feeding the world: Re-thinking the focus on GE

Genetically engineered crops are likely to remain a part of the food system, but they come with unintended environmental consequences and are far from being a silver bullet to meet the challenge of increasing food demand.

Crop yields have only increased about 20 percent in the past 20 years, so relying on yield improvements to double food supplies by 2050 would require not only a leap of faith but also a giant leap in biotechnology. According to research at the University of Minnesota, yields of major staple crops such as corn, wheat, rice and soybeans are not increasing fast enough to meet the growing demand for food.37 In order to double food supplies, the recent rate of yield improvements would have to roughly double.

In spite of the attention they have received, GE crops have not so far significantly contributed to food security. Although they cannot be ruled out as a part of the global food system, investments in these technologies should not overshadow traditionally bred varieties that are likely to drive much of the yield improvements for the foreseeable future.

Meeting global food demand will also require policymakers to explore how to make better use of what we already grow. Recent research shows that there are several important ways to more than double food availability and reduce agriculture’s environmental footprint without counting on dramatic technological advances. These strategies include smarter use of fertilizers, reducing food waste and small changes in what we eat. 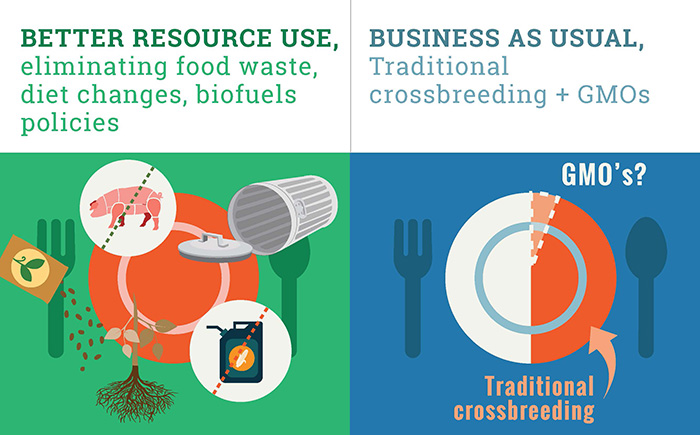 Funding support for this report was provided by the Just Label It campaign.