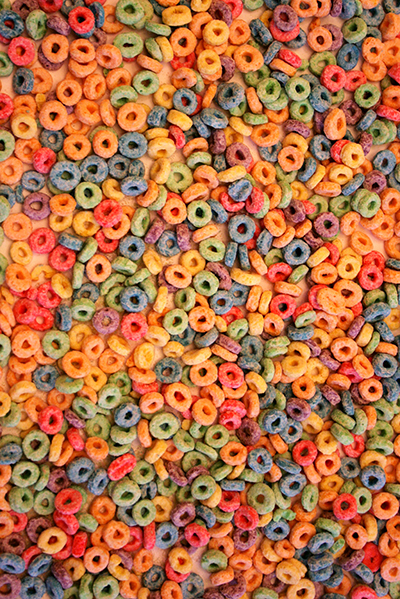 Overall, Americans gulp down an average of 152 pounds of sugar apiece each year from all sources, contributing to the ongoing obesity epidemic (USDA 2003).

Health professionals and especially dentists have known for years that sugar is harmful to teeth. From baby tooth decay in children who are put to bed with bottles to the dentures used by many elders, sugar is associated with cavities and tooth decay. The American Dental Association declares that “increased sugar in the diet increases the risk of decay” and encourages Americans to “keep added sugars in your diet to a minimum” (ADA 2013).

Sugar consumption has also been linked to cardiovascular disease (Malik 2010; de Koning 2012; Welsh 2011). Earlier this year, a study conducted by scientists from the Centers for Disease Control and Prevention and several U.S. universities reported that people who consume more than 10 percent of calories from added sugar (the current WHO limit) had a greater risk of mortality from cardiovascular disease compared to people who ingested less (Yang 2014).

Added sugars add calories without contributing important and under-consumed nutrients such as fiber and potassium. Over time, this can either cause under-nutrition – by sacrificing nutrient-rich foods in order to keep overall calories down – or over-nutrition and obesity. The 2010 federal Dietary Guidelines recommend limits on empty calories for both added sugars and solid fats, but they stop short of providing explicit guidance on just how much sugar alone is too much.

Two months ago (March 2014), the FDA proposed revisions to the Nutrition Facts label that would raise standard serving sizes of some products (FDA 2014b). The FDA also proposed adding a new line to the panel to show a product’s added sugar content (FDA 2014a).

EWG applauds the Obama administration and the FDA for taking these positive steps, which would bring the Nutrition Facts panel in line with the 2010 US Dietary Guidelines for Americans, draw consumers’ attention to the importance of minimizing added sugar and provide them with the information they need to reduce their added sugar intake.

The 2010 federal Guidelines advised consumers to “cut back on foods and drinks with added sugars… use the Nutrition Facts label to choose breakfast cereals and other packaged foods with less total sugars, and use the ingredients list to choose foods with little or no added sugars” (USDA and DHHS 2010). If FDA’s 2014 proposal is implemented, it will finally have given consumers the tools they need to follow this advice.

However, the current proposals are still insufficient to adequately protect children’s health from consuming too much sugar. The FDA must also update serving sizes for cereal to accurately reflect how Americans actually eat and create limits on added sugar for products that use nutritional claims.

Although much has changed in nutrition science in the last 16 years, it has been that long since the FDA updated its regulations for products that make nutritional claims on the packaging (FDA 1998). The agency’s rules are outdated and fail to ensure that consumers get crucial information.

Today, 95 percent of children’s cereals make a nutrition claim, and many tout their whole-grain, fiber, vitamin or mineral content with labels such as “Good Source of Vitamin D” (Harris 2009). But even though the Dietary Guidelines for Americans declared four years ago people should “reduce the intake of calories from [both] solid fats and added sugars,” the FDA has set no sugar limit for products that display nutrient content claims or are labeled “healthy” – as it does for saturated fat, sodium, cholesterol and total fat (USDA and DHHS 2010).

Research has shown that nutrition claims on packaging do influence how consumers perceive the overall healthfulness of foods (Drewnowski 2010). One recent study of parents of school-age children found that half were more willing to buy a cereal that carried a nutrition claim, even though the cereals were of below average nutritional quality (Harris 2011b). The authors wrote that these nutritionrelated claims “have the potential to mislead a significant portion of consumers.” Other experts on food labeling have come to the same conclusion. Jennifer Pomeranz, a professor of law and public health at Temple University, wrote last year in the American Journal of Law and Medicine that, “Perhaps the most problematic result of these lax regulations is that products high in added sugar carry a wide variety of nutrient content claims, which misleadingly convey healthfulness in an otherwise unhealthy product” (Pomeranz 2013).

Nutrition claims on food packaging are essentially a form of regulated advertising, since the FDA permits only certain specific “nutrient content claims” and prescribes how they can be presented (FDA 2013). To “prevent the claim from being misleading,” the agency requires that nutrient content claims be accompanied by a disclosure statement “to call the consumer’s attention to one or more nutrients in the food that may increase the risk of a disease or health-related condition” if certain constituents of the food, such as saturated fat, exceed a specified level (FDA 2013). The FDA’s rules provide that “if a nutrient content claim is made, the label must provide the consumer with the facts that bear on the advantages asserted by the claim and with sufficient information to understand how the product fits into a total dietary regime” (FDA 1993).

Under the current regulations, Kellogg’s Froot Loops with Marshmallows, which is 48 percent sugar, meets the FDA’s definition of “healthy.” It also carries the nutrient content claim, “Good Source of Fiber,” on the front of the package. That makes it more likely that to parents will fail to note that sugar is the first ingredient on the Nutrition Facts label, or that the cereal contains 3½ teaspoons of added sugar (14 grams) and unhealthy trans fats. (See Table 5 for additional examples of high sugar cereals that carry nutrient content claims.)

The FDA should take action to limit the amount of added sugars permissible in any product that makes claims about health, reducing disease risk or providing essential nutrients.

FDA should seek updated guidance from the Institute of Medicine

Twelve years ago, the Institute of Medicine, a branch of the National Academies of sciences, studied the issue of added sugars in food and concluded:

“there is insufficient evidence to set an upper limit for total or added sugars. Although a UL [Tolerable Upper Intake Level] is not set for sugars, a maximal intake level of 25 percent or less of energy from added sugars is suggested based on the decreased intake of some micronutrients of American subpopulations exceeding this level” (IOM 2002).

In its 2002 assessment of sugar intake, however, the Institute of Medicine committee failed to control for total energy intake, a key part of defining a healthy diet (Barr and Johnson 2005; Forshee and Storey 2004; Marriott 2010). This flawed methodology resulted in a very high allowance for sugar intake that exceeded the amounts recommended by other scientific bodies at the time and since.

Four years ago, the government’s authoritative 2010 Dietary Guidelines for Americans reviewed the most recent science and concluded that “for most people, no more than about 5 to 15 percent of calories from both solid fats and added sugars can be reasonably accommodated… to meet nutrient needs within calorie limits” (USDA and DHHS 2010). Many other new studies have underscored the harmful health effects of consuming too much sugar (Basu 2013; InterAct Consortium 2013; Moynihan and Kelly 2014; Yang 2014).

The Nutrition Facts panel required on food packaging, however, still provides no guidance on how much sugar people can consume as part of a healthy diet. The content of the panel is regulated by the FDA, which calculates the “percent Daily Value” for major nutrients, advising shoppers on how much of the recommended consumption of that nutrient the product provides. The agency has set these Daily Values for many nutrients, vitamins and minerals, including others that should be limited such as saturated fat and sodium. To date, however, the agency has not established one for sugar, even though the agency acknowledges that “there continues to be strong scientific evidence linking total sugars intake with dental caries” (FDA 2014a). 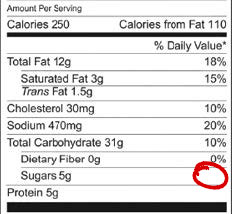 In justifying its decision not to set a percent Daily Value for total or added sugars, the FDA has pointed out that the Institute of Medicine’s 2002 report did not set a “Tolerable Upper Intake Level” for sugar (FDA 2014a).

Only recently (March 2014) did the agency propose a revision to the Nutrition Facts panel, saying that it had “tentatively conclude[d] that the declaration of added sugars is required to assist consumers in maintaining healthy dietary practices” (FDA 2014a).

In light of the considerable new evidence, the FDA should commission the Institute of Medicine to do a new study of the harmful health effects of high sugar consumption and determine a reasonable, sciencebased limit for added sugars. Given the new evidence available since 2002, the Institute, in turn, should revisit its earlier determination that there is not enough evidence to set an upper limit for added sugars.

The FDA should then re-evaluate whether to provide specific guidance to consumers by displaying a percent Daily Value for sugar on the Nutrition Facts label.

Some have suggested that adding a percent Daily Value for sugar would give consumers the mistaken impression that they need to seek out added sugars in order to meet a Daily Value, rather than simply minimizing their intake. While there is inevitably some potential for mixed messages, consumers have for years been using the percent Daily Values to limit their consumption of other unhealthy ingredients, such as saturated fat and sodium. It is reasonable to assume, therefore, that listing a percent Daily Value for added sugar should have similar results – especially if the FDA were to adopt its alternative proposal to have the Nutrition Facts panel explicitly identify which nutrients to “avoid too much” and those to “get enough” of (FDA 2014a).

Serving sizes do not reflect the dietary habits of Americans

Revising the standard “serving size” on the Nutrition Facts panel for the most common type of cold cereals may also help Americans reduce the amount of sugar they consume.

Many children eat more than a single serving of cereal daily because manufacturers list unrealistically small serving sizes. Many cereals list a serving size of 30 grams, corresponding to ¾ cup or 1 cup, but a 2011 food industry study found that for children and adolescents, the average amount eaten in a meal is 42-to-62 grams – about twice as much (Albertson 2011). Another study found that children who eat high-sugar cereals consume almost twice as much cereal as those who eat low-sugar cereals (35 grams versus 61 grams) (Harris 2011a).

The FDA has proposed to increase the serving size for many foods, but not for breakfast cereals. The agency’s declared rationale for changing serving sizes is based on whether amounts actually consumed at a single sitting are at least 25 percent greater than the serving sizes set by the FDA in 1993 (FDA 2014b). FDA analysis has shown that for some cereals, such as light-density plain puffed cereal grains (such as puffed rice) and heavydensity cereals (such as granola or shredded wheat), the amounts typically eaten are similar to the labeled serving sizes. But for the most common cold cereals such as Bran Flakes, Corn Flakes or Froot Loops – which weigh 20-to-43 grams per cup – the FDA data reveal that the average American eats 39 grams, 30 percent more than the current serving size of 30 grams (FDA 2014b). For these cereals, the 30 percent difference between the amount eaten and standard serving sizes exceeds FDA’s 25 percent bar for updating serving sizes.

In addition, the FDA data shows that at least 10 percent of Americans eat up to 2.6-times more of this type of cereal at a sitting than the serving size on the label (FDA 2014b). This corresponds to tens of millions of adults and children who are consuming more sugar than the label suggests.

In failing to update the reference amount for the most commonly eaten medium-density cereals, the FDA has failed to follow its own rules. Consumption patterns have changed significantly, and it’s past time to increase the serving sizes on Nutrition Facts labels for these products.