In 1982, ducks and other waterfowl began dying mysteriously at the Kesterson National Wildlife Refuge in Merced County. By the spring of 1983, record numbers of migratory birds were emerging from their eggs with massive deformities, including misshapen beaks, twisted legs, missing wings, and incompletely formed skulls. More than 1,000 waterfowl eventually died.

Biologists found that water in the refuge contained high levels of selenium, a usually benign trace element that can be deadly to wildlife and humans in high concentrations. The compound was reaching the refuge in drainage water coming from the highly saline soils of the San Luis Unit of the Central Valley Project. The selenium concentrated in Kesterson's water and vegetation and poisoned birds and other wildlife.

In 1985 the selenium contamination forced officials to close the San Luis Drain, a cement canal used to funnel waste waters away from farmland in the western San Joaquin Valley. The canal had been built in the 1970s during an era of large-scale expansion of federal irrigation projects. It carried millions of gallons of agricultural waste water to Kesterson, where the federal government used the water to flood the ponds and marshes, creating the wildlife habitat — but also creating a conduit for environmental devastation.

Less than five years later, 100 miles to the south, even higher levels of selenium were found near the Kern National Wildlife Refuge, this time in evaporation ponds used to hold farm runoff. Emergency measures were instituted to reduce runoff to the ponds, but to save waterfowl the U.S. Fish and Wildlife Service was forced to scare birds away. A subsequent study by the Fish and Wildlife Service found that about one in 10 of the nation's 430 federally protected wildlife refuges could be contaminated by agricultural runoff.

Prompted by the Kesterson and Kern disasters, the National Research Council conducted an extensive investigation of irrigation-induced water quality problems, concluding: "The contaminants of concern and the severity of impacts may vary, but the phenomenon of irrigation-induced water quality contamination can no longer be ignored." [19] The chair of the study, Jan van Schilfgaarde, associate director of the U.S. Agricultural Research Service in Fort Collins, Colo., wrote: "Action is necessary if recurrences of Kesterson-like scenarios and potential adverse human health effects from poor water quality are to be avoided. The national benefit from irrigated agriculture in the West is unquestionably great, but the laws of nature cannot be waived." [20]

The Central Valley Project — which enables water-intensive crops to grow in a near-desert — is both an audacious attempt to change nature and a clear example of the inevitable environmental degradation.

According to the USDA, agriculture is "the leading source of remaining impairments in the Nation's rivers and lakes and a major source of impairments to estuaries." [21] Agriculture degrades water quality by increasing the concentrations of natural constituents such as dissolved solids, salts, suspended sediment, dissolved organic carbon, trace elements and nitrate, as well as man-made constituents such as pesticides and nutrients from fertilizers. [22] These pollutants have a variety of adverse effects.


Fertilizers: Nitrogen and phosphorous, both a major component of many fertilizers, often accelerate algal and other biological production; this can in turn lower dissolved oxygen levels, sometimes to such an extent that the water is unable to support life.

In 1996, EWG reviewed nearly 200,000 water sampling records and found that more than 2 million people nationwide drank water from systems that had been reported to the EPA for significant violations of the nitrate standard during the previous decade. In California, more than 380,000 people — most of them in the San Joaquin Valley — drank water that violated the standard.


Pesticides: More than 1 billion pounds of chemical pesticides are applied to U.S. farms each year, and like nitrates in fertilizer, what's not used by the crop goes into runoff, which makes its way into drinking water. Exposure to pesticides in drinking water has been linked to a wide range of adverse health effects in humans and laboratory animals including cancer, Parkinson's disease, immune system depression, and endocrine disruption. Of particular concern is the herbicide atrazine, little used in California, but heavily used on corn in the Midwest. A 1998 EWG study found that tap water in a dozen Ohio communities was contaminated, at levels well above federal safety standards, with atrazine and other agricultural chemicals.


Sediment and bacterial solids: Sediment and dissolved solids from animal waste and other sources can degrade wildlife habitat, increase the costs of drinking water treatment, and lead to the formation of toxic chlorination byproducts such as trihalomethanes (THMs), which are linked to miscarriages and birth defects. [21, 23] A compelling body of scientific evidence - nearly 30 peer-reviewed epidemiologic studies - links chlorination byproducts to increased risks of cancer. At current levels in U.S. tap water, EPA estimates that chlorination byproducts cause up to 9,300 cases of bladder cancer each year.


Irrigated cropland has even greater impact on water quality than other types of agriculture. [24] First, applied water increases field erosion rates, which means higher sediment levels in receiving waters. The greater drainage flows associated with irrigation also mean accelerated pollutant transport. These factors are linked, because many contaminants such as pesticides, metals and nutrients bind to sediment. In addition, studies have shown that irrigated crop production uses more chemical pesticides and fertilizers than non-irrigated crop production, which means more chemicals in the runoff water.

Under the federal Clean Water Act, every other year California must submit to the EPA a list of all the "impaired" waters in the state — those unsuitable for drinking, swimming, fishing or wildlife habitat. This list of impaired waters must also include information on the type of water quality issues affecting each water body and the likely sources of these pollutants and stressors.

The state's most recent impaired waters list includes more than 700 miles of rivers, creeks and sloughs in the Central Valley, plus almost 55,000 acres of wetlands and estuaries where impaired water quality is linked to agriculture. [25] The problems listed include everything from excess sediment and altered stream temperatures to contamination with toxins such as selenium and seventeen different pesticides.

The affected waters include large, well-known rivers such as the Tuolumne, Merced, San Joaquin, Stanislaus, Sacramento and Feather. The most highly contaminated is the San Joaquin, contaminated with 12 different pesticides as well as selenium and boron. Several others are close behind: the lower Merced River is polluted with 11 different pesticides; the lower Tuolumne is polluted with 10.


Table: Agriculture impairs more than 700 miles of rivers in the Central Valley 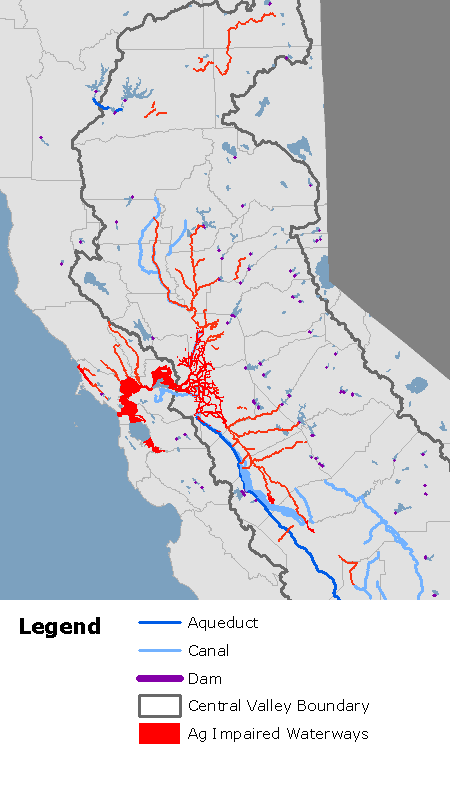 Worse, despite the well-documented adverse environmental and health impacts of farm runoff, this source of contamination remains mostly unregulated. While other industries must comply with federal regulations designed to keep drinking water clean and healthy and make all of the nation's waters "swimmable and fishable," agricultural discharges remain exempt under the federal Clean Water Act.

Agriculture is California's largest industry, but the only one exempted from most water pollution standards. In recent years, a statewide coalition of public interest groups has campaigned to regulate agricultural water pollution, saying the exemption permits runoff containing pesticides, nitrates, and heavy metals from over 7 million acres of farmland to contaminate hundreds of miles of waterways and ultimately drinking water. In early 2004, after the Central Valley Regional Water Quality Control Board voted to extend the exemptions, Earthjustice, Waterkeepers and other groups sued to force the regional board and the State Water Resources Control Board to regulate farm runoff.

‹ About the Central Valley Project Recommendations ›