Breakfast With a Dose of Roundup?

Popular oat cereals, oatmeal, granola and snack bars come with a hefty dose of the weed-killing poison in Roundup, according to independent laboratory tests commissioned by EWG.

Glyphosate, an herbicide linked to cancer by California state scientists and the World Health Organization, was found in all but two of 45 samples of products made with conventionally grown oats. Almost three-fourths of those samples had glyphosate levels higher than what EWG scientists consider protective of children’s health with an adequate margin of safety. About one-third of 16 samples made with organically grown oats also had glyphosate, all at levels well below EWG’s health benchmark.

Glyphosate is the active ingredient in Roundup, the Monsanto weed killer that is the most heavily used pesticide in the U.S. Last week, a California jury ordered Monsanto to pay $289 million in damages to a man dying of cancer, which he says was caused by his repeated exposure to large quantities of Roundup and other glyphosate-based weed killers while working as a school groundskeeper.

EWG tested more than a dozen brands of oat-based foods to give Americans information about dietary exposures that government regulators are keeping secret. In April, internal emails obtained by the nonprofit US Right to Know revealed that the Food and Drug Administration has been testing food for glyphosate for two years and has found “a fair amount,” but the FDA has not released its findings.

Glyphosate Was Found on Most Samples of Oat-Based Foods

Each year, more than 250 million pounds of glyphosate are sprayed on American crops, primarily on “Roundup-ready” corn and soybeans genetically engineered to withstand the herbicide. But when it comes to the food we eat, the highest glyphosate levels are not found in products made with GMO corn.

Increasingly, glyphosate is also sprayed just before harvest on wheat, barley, oats and beans that are not genetically engineered. Glyphosate kills the crop, drying it out so that it can be harvested sooner than if the plant were allowed to die naturally.

Roundup was produced for decades by Monsanto, which this year merged with the German pharmaceutical company Bayer AG. In the case decided last week, the jury found that Monsanto knew for decades of the product’s hazards and not only failed to warn customers, but schemed to publicly discredit the evidence. It was the first case heard of more than 400 U.S. lawsuits by farm workers and others who allege that they developed cancer from years of exposure to Roundup.

In 2015, the International Agency for Research on Cancer, part of the World Health Organization, reviewed extensive U.S., Canadian and Swedish epidemiological studies on glyphosate’s human health effects, as well as research on laboratory animals. The IARC classified the chemical as probably carcinogenic to humans, and has steadfastly defended that decision despite ongoing attacks by Monsanto.

In 2017, California listed glyphosate in its Proposition 65 registry of chemicals known to cause cancer. The state’s Office of Environmental Health Hazard Assessment, or OEHHA, has proposed a so-called No Significant Risk Level for glyphosate of 1.1 milligrams per day for an average adult of about 154 pounds. That level of exposure is more than 60 times lower than the safety level set by the Environmental Protection Agency.

California’s level represents an increased lifetime risk of cancer of one in 100,000 for an average adult. But for many cancer-causing drinking water contaminants, OEHHA’s lifetime risk factor is set at one in 1 million. Additionally, because children and developing fetuses have increased susceptibility to carcinogens, the federal Food Quality Protection Act supports including an additional 10-fold margin of safety. With this additional children’s health safety factor, EWG calculated that a one-in-a-million cancer risk would be posed by ingestion of 0.01 milligrams of glyphosate per day.

To reach this maximum dose, one would only have to eat a single 60-gram serving[1] of food with a glyphosate level of 160 parts per billion, or ppb. The majority of samples of conventional oat products from EWG’s study exceeded 160ppb, meaning that a single serving of those products would exceed EWG’s health benchmark. As part of a glyphosate risk assessment, the EPA estimated potential highest dietary exposure levels for children and adults. The EPA has calculated that 1-to-2-year-old children are likely to have the highest exposure, at a level twice greater than California’s No Significant Risk Level and 230 times EWG’s health benchmark.

Studies suggest that glyphosate-sprayed crops such as wheat and oats are a major contributor to glyphosate in the daily diet. In EWG lab tests, 31 of 45 samples made with conventionally grown oats had 160 ppb or more of glyphosate.

How does glyphosate get into organic foods? It could come from glyphosate drifting from nearby fields of conventionally grown crops, or by cross-contamination during processing at a facility that also handles non-organic crops. Nature's Path explains:

While organic farming certifications prohibit the use of glyphosate, organic products do not always end up completely free of glyphosate residue. While this news may come as disappointing, it is not entirely surprising. Glyphosate use has skyrocketed in the past decade, and it maintains the ability to adhere to water and soil particles long enough to travel through the air or in a stream to nearby organic farms.

The problem of glyphosate contamination of organic foods underscores the need to restrict pre-harvest uses of glyphosate and the need for more data on glyphosate levels in products, an area where U.S. federal agencies are falling short.

Two years ago, under pressure from the Government Accountability Office, the FDA began testing for glyphosate in a limited number of foods. At the 2016 North American Chemical Residue Workshop, an FDA scientist presented data showing that glyphosate has been detected in several oat-based food products.

After a Freedom of Information Act request by US Right to Know, earlier this year the FDA released documents that said the agency has found “a fair amount” of glyphosate in several processed foods. The results have not been released, but could be made public later this year or in early 2019.

In 2016, the non-profit Food Democracy Now tested for glyphosate in single samples of a variety of popular foods. “Alarming levels” of glyphosate were found in a number of cereals and other products, including more than 1,000 ppb in Cheerios. More recently, the Center for Environmental Health tested single samples of 11 cereal brands and found glyphosate levels ranging from about 300 ppb to more than 2,000 ppb.

EPA has denied that glyphosate may increase the risk of cancer, and documents introduced in the recent California trial showed how the agency and Monsanto worked together to promote the claim that the chemical is safe. EWG is urging the EPA  to review all evidence linking glyphosate to increased cancer risk and other adverse health effects in human and animal studies. The EPA should limit the use of glyphosate on food crops, including pre-harvest application.

Oat-based foods are a healthy source of fiber and nutrients for children and adults, and oat consumption is linked to health benefits such as lowered cholesterol and decreased cardiovascular risk. Parents should not have to wonder whether feeding their children these heathy foods will also expose them to a pesticide that increases the risk of cancer.

Glyphosate does not belong in cereal. Act and urge the EPA to restrict pre-harvest applications of glyphosate and tell companies to identify and use sources of glyphosate-free oats.

Glyphosate levels reported here represent a snapshot of glyphosate contamination in an exploratory set of of oat-based products sampling.

All product samples were purchased and packed for shipping by EWG researchers located in Washington, D.C., Boulder, Colo., and San Francisco. Eurofins Analytical Laboratories, based in New Orleans, received and tested samples labeled only with EWG-assigned sample numbers.

Glyphosate concentration was determined by liquid chromatography–tandem mass spectrometry, using the extraction method published in the Journal of Agricultural and Food Chemistry.[1] According to the method description provided to EWG by Eurofins, samples are ground, extracted with water, and cleaned in a Dowex AG1-X8 200 mesh resin column. Eluent is derivatized in FMOC-CL and allowed to react overnight in a 40 degrees Celsius water bath. Sample cleanup is performed with an Oasis SPE HLB column, and the eluent is analyzed for glyphosate by LC-MS/MS. The method’s limit of quantification for glyphosate is 0.01 milligrams per kilogram.

When calculating the value for the level of glyphosate in tested foods that would exceed EWG’s children’s health benchmark for glyphosate, we used 60 grams as the estimated amount that people are likely to eat at one time. This is equivalent to roughly two cups of Cheerios, or ¾ cup of Quaker’s Old Fashioned Oats based on product nutrition facts. 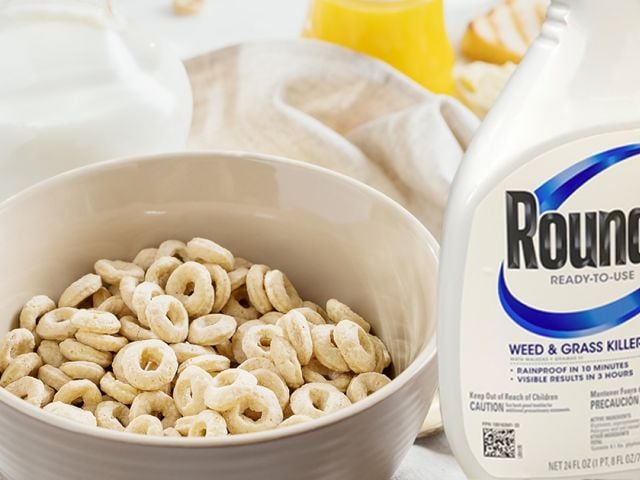