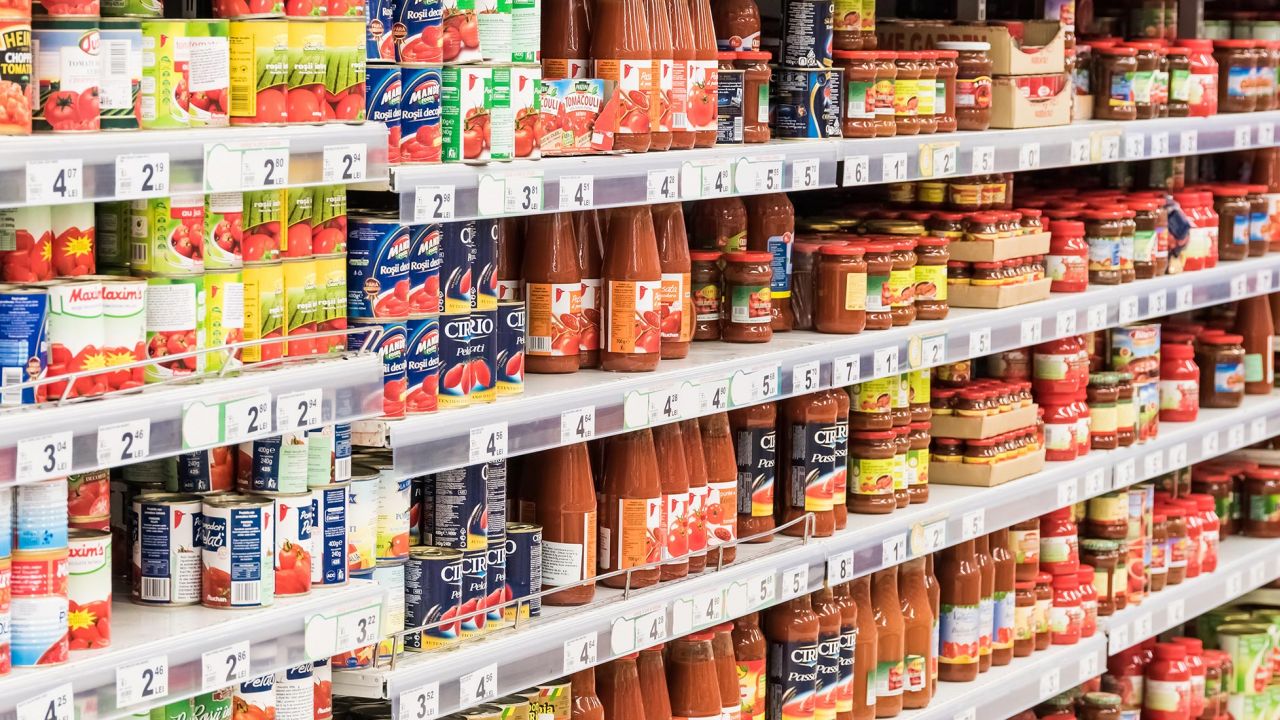 EWG has created the first easily searchable database of approximately 16,0001 processed food and drink items packaged in materials that may contain the hormone-disrupting chemical bisphenol A, or BPA––using information from the very companies that manufacture and sell these products.

BPA acts like estrogen in the body and should be kept away from pregnant women and children in critical windows of development, according to researchers who have linked it to cancer, infertility, brain, nervous system and cardiovascular abnormalities, diabetes, obesity and other serious disorders. BPA contamination is widespread in processed foods and drinks because the chemical is a key component of the epoxy used as an anti-corrosive coating inside most of the 126 billion food cans manufactured in the U.S. each year.

California requires warnings on products containing chemicals known to cause cancer, birth defects or other reproductive harm. But after the state added BPA to the list of such chemicals, it allowed generic warning signs at checkout registers instead. In the process of complying with the state’s regulation, food companies unexpectedly and with little public notice laid bare more information than ever before about BPA in food and beverage containers.

When the warnings went up in May 2016, some shoppers complained they weren't helpful -- the checkout signs say BPA is in the linings of "many food and beverage cans” but don't specify brands and products or alert consumers before they choose their purchases.2 But few Californians know that food industry trade groups have quietly set up a website listing more than 16,000 products in cans, bottles, jars or other packaging that may contain BPA.

The industry website's apparent main purpose is to help food companies supply warning signs to retailers.3 But it also holds the largest, most detailed list to date of food products that may contain BPA in their packaging. It reveals that Americans are far more widely exposed than previously known to a hormone-disrupting industrial chemical that poses greatest risk to pregnant women, infants and children. But the website is a chaotic jumble––incomplete, inconsistent, poorly organized and hard to use.

Because consumers have a right to know what's in their food, EWG took the industry’s own database and created a searchable list of products that may be packaged with BPA, not just in California but nationwide, within Food Scores. Food Scores also allows consumers to search for products that are in BPA-free packaging.

“No other industry in the world is more adept at marketing products to its customers than food and beverage companies––except apparently when it comes to informing them about the possible presence of a toxic chemical linked to hormone disruption and cancer,” said EWG president Ken Cook. “So we decided to give them a little help in making their own data more accessible to Americans.”

Most concern about BPA in food packaging has focused on canned food, especially soup, vegetables and fruit. EWG’s 2015 market survey found that some companies had switched to BPA-free cans under pressure from retailers and consumers, but most canned food sold in the U.S. still uses BPA-based linings.

The industry's voluminous database shows in detail how BPA packaging spans almost every aisle in the store: It's in the linings or lids of glass jars for baby food, pickles, jelly, salsa and other condiments; aerosol cans for whipped toppings and non-stick sprays; bottles and tins of cooking oil; aluminum beverage cans, coffee cans and even beer kegs.

Food packaging is the largest source of exposure to BPA, which readily migrates from packaging into edibles. The U.S. Centers for Disease Control and Prevention found detectable levels of BPA in 93% of samples taken in 2003-2004 from people six years and older.4 In 2009, tests commissioned by EWG were the first to find BPA in the umbilical cords of nine of 10 infants sampled.5 BPA is one of 23 biologically disruptive chemicals being investigated by The Halifax Project, an international collaboration of scientists and doctors who are studying the connection between chemical exposures and cancer.

Despite the mounting evidence of risk, federal regulation of BPA in food packaging is woefully inadequate.

In 2010 the U.S. Food and Drug Administration said it had “some concern about the potential effects of BPA on the brain, behavior, and prostate gland in fetuses, infants and young children.” It encouraged the food industry to voluntarily replace BPA-based plastic in baby bottles, shift away from BPA-based linings in canned baby formula and explore alternative packaging for canned foods. In 2012, FDA denied a petition by the Natural Resources Defense Council to ban BPA in all food and beverage packaging. The FDA released an updated safety assessment in 2014 saying it continues to stand behind the safety of BPA linings in food cans.

Thirteen states, the District of Columbia and a few local jurisdictions have banned BPA in reusable food containers or children’s cups and baby bottles. Maryland, Connecticut, Minnesota, Nevada and Vermont have set limits on BPA on one-time use food containers, including cans, of infant formula or baby food. Maryland has banned baby formula containing more than 0.5 parts per billion BPA and California has limited BPA to 0.1 part per billion in bottles and cups for children under three years old.

In May 2015, California’s Office of Health Hazard Assessment declared BPA a female reproductive toxicant adding it to what is known as the Proposition 65 list, after the law requiring warning labels on products with listed chemicals. A year later, as the deadline neared for posting warnings, the food industry and retailers lobbied against the regulation and for more time to comply.

Retailers were daunted by the sheer number of products that potentially needed labels on the package or shelf. The industry was concerned that retailers would just clear affected items from their shelves. The health hazard agency said that could deprive people dependent on canned goods of access to nutritious food––a favorite argument of the industry’s effort to block bans or restrictions on BPA6.

The state’s solution was an emergency regulation allowing food companies to partner with retailers to place warning signs at checkout. The regulation expires in October 2016, but can be extended. The agency expects the temporary rule to last no more than a year, but that depends on how long it takes to set a so-called "safe harbor level” for oral exposure to BPA in food packaging, below which warnings are not required. The agency is waiting for results of federally sponsored research to inform its decision of a safe exposure level, which could delay a decision until early 2018 or later. That means it’s likely that for at least a year, Californians won't be able to tell from store warnings which products have BPA-based packaging.

Public health and environmental groups objected to the plan. The Breast Cancer Fund and Natural Resources Defense Council wrote to state regulators that signs at checkout do not provide "a clear and reasonable warning to the consumer."7 The day the signs went up, some shoppers echoed that concern.

"I’m not paying attention (to the checkout warning) once I’m done shopping, especially with kids," Claudia Diaz of Los Angeles told Southern California Public Radio. "At the register, my focus is on something else, not on what I picked out."8

None of the news stories about the signs going up made mention of the industry website. The signs direct shoppers to the state’s Proposition 65 website, which includes a fact sheet about BPA that does not mention the industry website, or a list of products that likely come in packaging made with the chemical.

In a press release, the Grocery Manufacturers Association said it and other trade groups created the website as a place where retailers can order warning signs and also “provide retailers and consumers with an easy way to identify which products the warning signs apply to."9

But calling it easy is disingenuous at best. For example:

Despite its flaws and subdued promotion, the data's disclosure is an unprecedented and welcome move toward transparency by the food industry. And this may only be the tip of the iceberg, as the website appears to be set up to accommodate ongoing additions and updates. Manufacturers continually change labels to tout new flavors or other selling points, so it's reasonable to expect them to keep the BPA website accurate and up to date.

To produce our list, EWG downloaded files from the industry website, which were in a variety of non-compatible formats, then extracted the brand names, product descriptions and barcodes. The data was then matched against information in Food Scores, and the matches were hand-reviewed to ensure accuracy. In mining the industry data for our own list, EWG found:

EWG urges the California Office of Health Hazard Assessment not to extend beyond October 2016 the temporary rule allowing warning signs to be placed at checkout. The agency should also move quickly to establish a "safe harbor" limit for BPA in food packaging that takes into account risk from low doses, to allow customers to choose products that will not expose them to levels above the limit.

At the same time, we urge members of Congress to support legislation by Sen. Dianne Feinstein (D-Calif.) to require labels on food packaging that contains BPA.13 The FDA should also reassess the safety of this chemical, which the website reveals is more widely used in food packaging than previously known.

EWG will continue to organize, analyze and report on the data from the food industry's website to ensure that consumers have convenient access to information about what's in their food.

1 The industry list contains 11,879 unique product names. Because of variations in some products and incomplete information for others, EWG's conservative calculation finds more than 16,000 traceable Universal Product Codes.

12 B&G Foods, Knouse Foods, Roland Foods and Bush Brothers & Company each have over 300 products listed. Chicken of the Sea International, SB, Sampco and Progresso each have over 200. Hormel Foods, 7-Up Bottling Company, Pinnacle Foods, Victoria Fine Foods, Welch’s, Teasdale, Mizkan America, Faribault Foods, Foodmatch and Walmart each have over 100.

The plastics chemical BPA is a synthetic estrogen that can disrupt the boy’s natural hormones. We show you how to avoid it in household items you use every day.