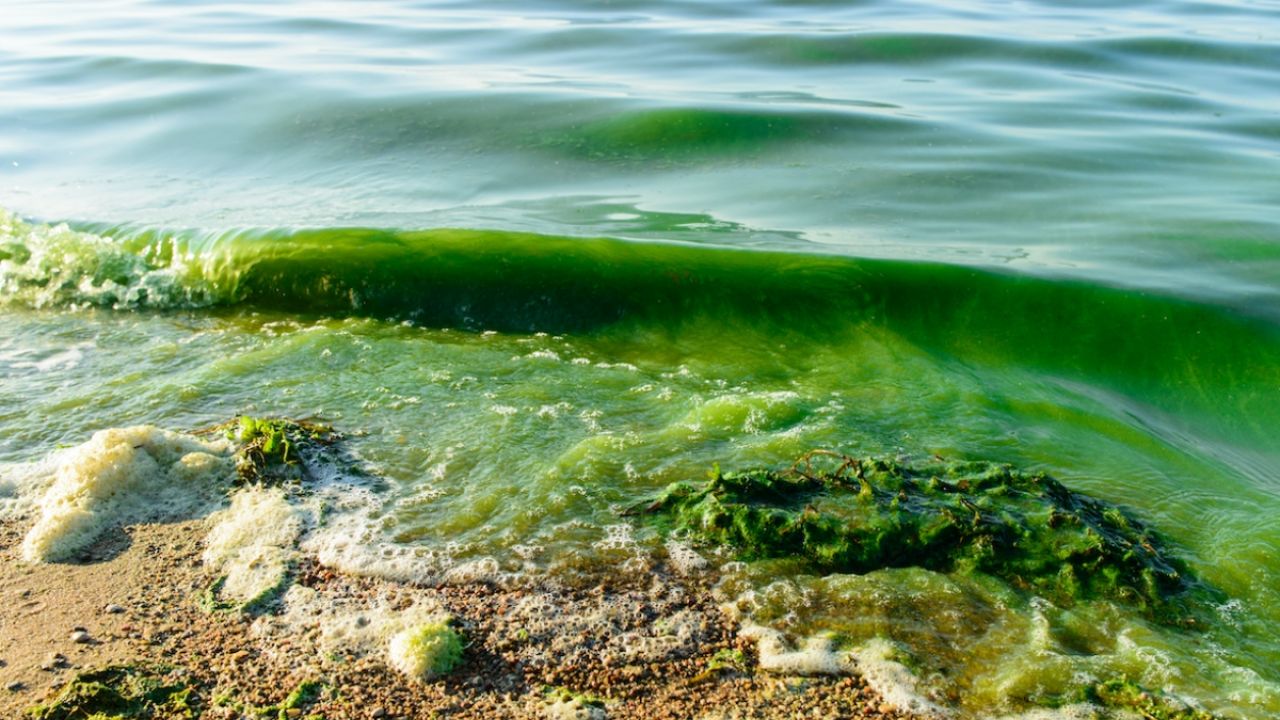 Across America, outbreaks of toxic algae, triggered by polluted farm runoff, are increasing in frequency and severity, fouling drinking water with dangerous toxins. In 2014, an algae outbreak in Lake Erie contaminated the tap water for 500,000 people in and around Toledo, Ohio, rendering it unsafe to drink for three days.

Lake Erie is fed by the Maumee River, whose vast watershed includes hundreds of factory farms with hogs, cattle and poultry that produce millions of pounds of manure annually. Manure is rich in phosphorus, which feeds the algae blooms that infest the lake each year. But there has been scant verifiable information about how much the manure from factory farms is to blame for the pollution pouring into Lake Erie – until now.

An EWG and Environmental Law & Policy Center investigation used aerial imaging and satellite mapping to show that from 2005 to 2018, the number of animal factory farms in the Maumee watershed increased by more than 40 percent. The amount of manure from these farms increased from 3.9 million tons in 2005 to 5.5 million tons in 2018. And shockingly, most of the manure comes from factory farms that lack state permits and are therefore immune to regulation. Absent a permit, we know nothing about an animal feeding operation except what can be gleaned from aerial imagery. Even state officials admit they’re in the dark. The minutes of a June 2017 meeting of the state’s Concentrated Animal Feeding Advisory Committee reported that “[I]t is a huge challenge to really know what is out there in regards to medium-sized animal feeding facilities.”

For more than a decade, scientists have warned that the deluge of animal waste flowing from the Maumee would make algae outbreaks in Lake Erie worse. State officials have repeatedly vowed to clean up the runoff – most notably after the Toledo crisis – but the plague has continued, because of the undue political influence of Ohio’s huge agriculture industry.

Ag interests have blocked progress with aggressive lobbying and public relations spin that have traded on farming’s bucolic image to head off regulation, including the collection of reliable data. As Toledo Mayor Wade Kapszukiewicz said last year: “We live in a state where our legislature is a wholly owned subsidiary of the farm bureau.“

For most of his two terms, former Ohio Gov. John Kasich embraced the fallacy that voluntary conservation efforts could measurably lessen pollution of the lake. In 2018, in his administration’s waning days, he declared eight watersheds in the western basin of Lake Erie in distress, directing state agencies to draft rules for managing phosphorous from manure and chemical fertilizers. But agricultural interests stymied the proposal.

Kasich’s successor, Gov. Mike DeWine, is now avoiding meaningful action by proposing an “H2Ohio” fund to be used for water protection. Another voluntary measure, the proposal amounts to loading taxpayer money into a cannon and shooting it out over the lake in the hope that some will land on a farmer willing to stop nutrient runoff.

Out of desperation, in February Toledo held a special election to confer on Lake Erie the legal rights “to exist, flourish, and naturally evolve.” The Lake Erie Bill of Rights would give any resident of Toledo legal standing to file suit on behalf of the lake. A member of the grassroots group who campaigned for the measure – a mother who was in the hospital giving birth during the 2014 algae crisis – said: “We can’t rely on the [Environmental Protection Agency] to do anything at this point.”

The Ohio Farm Bureau wasted no time in striking back. A day after the referendum passed, a Farm Bureau member filed a lawsuit challenging the constitutionality and legal status of the Lake Erie Bill of Rights. The Farm Bureau immediately pledged its full support of the lawsuit.

The Farm Bureau is trying to perpetuate the myth that manure from factory farms plays only a limited role in feeding the annual algae outbreak. EWG and ELPC’s investigation proves otherwise. Application of commercial chemical fertilizers in the Maumee basin have declined since the 1980s, and the acreage planted in row crops has been relatively unchanged. But the phosphorous load from manure has increased by two-thirds.

Madeline Fleisher, senior attorney for the Midwest-based nonprofit Environmental Law and Policy Center in Ohio, says the crucial first step is to develop a legal limit under the Clean Water Act, called a Total Maximum Daily Load, for the amount of phosphorus allowed to enter Lake Erie, rather than continuing to pursue ineffective voluntary approaches. This would provide a framework for targeted reductions of manure and commercial fertilizer and provide an enforcement mechanism, especially combined with an effort to require more industrial animal farms to obtain Clean Water Act permits for their manure discharges.