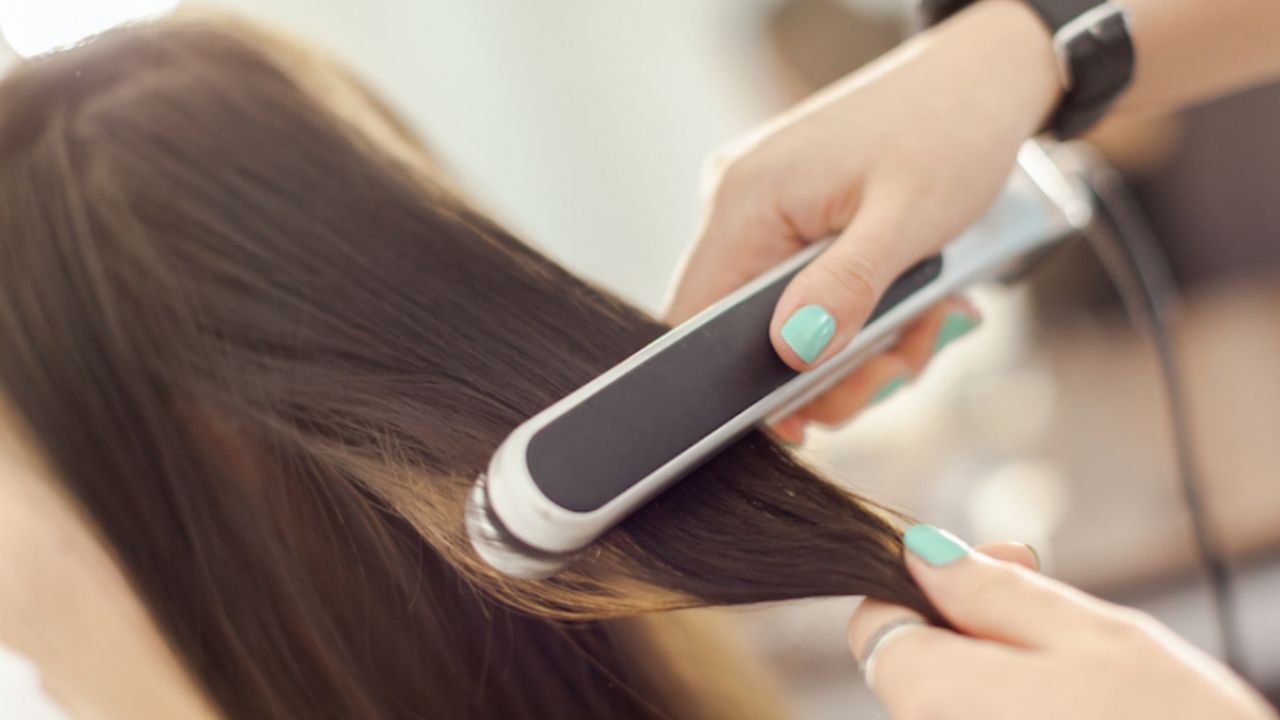 As reported by The New York Times today, newly released emails show that in 2015 and 2016, Food and Drug Administration scientists urged the agency to ban toxic formaldehyde in hair-smoothing products, often referred to as “Brazilian blowout” treatments. The communications, obtained by EWG, also document increasing frustration among FDA scientists about the agency’s efforts to regulate toxic chemicals in cosmetics.

A July 2016 email shows that the scientists succeeded in convincing the FDA that a ban was justified. However, more than four years later, the treatments remain available and the FDA has taken no public steps toward a ban.

Brazilian blowout treatments smooth hair and intensify shine by bonding methylene glycol, a liquid form of formaldehyde, to the hair cuticle and then heating it. The heat converts the methylene glycol into formaldehyde gas, creating fumes that are inhaled by stylists and salon patrons.

The health risks from formaldehyde exposure are well-documented. The National Toxicology Program classifies formaldehyde as a known carcinogen. Short-term exposure is associated with eye, nose, and throat irritation, shortness of breath and wheezing. Formaldehyde is a potent sensitizer and is thought to increase the risk of asthma for some groups. The Centers for Disease Control and Prevention has warned that “working with formaldehyde may increase your chances of having fertility problems or a miscarriage.”

In April 2011, EWG petitioned the FDA to take action on formaldehyde in hair-straightening products. The FDA issued a partial response in 2017, promising only to continue looking into the issue. In fact, the FDA has taken few public actions on formaldehyde, aside from sending warning letters in 2011 and 2015 to two manufacturers acknowledging that the products violate the Food, Drug and Cosmetics Act.

The emails obtained by EWG tell a different version of what went on behind the scenes at the FDA.

Records reveal that by 2015, FDA scientists were working on a comprehensive safety assessment and were concerned by the lack of existing regulations. Nakissa Sadrieh, Ph.D., director of the cosmetics division of the FDA Office of Cosmetics and Colors said in a February 2015 e-mail, “I’m glad that OSHA” – the Occupational Health and Safety Administration – “has some requirements. We sure don’t.”

The emails show that a draft scientific risk assessment of formaldehyde was completed in early 2016 and went through additional edits throughout the year. In July 2016, the Center for Food Safety and Applied Nutrition, the FDA office that oversees the Office of Cosmetics and Colors, approved pursuing a ban on formaldehyde. On July 26, Sadrieh wrote: “[T]he center is proposing to develop regulations to ban the use of formaldehyde in hair smoothing products.… This is a very big deal for us, and for the public.”

By August 2016, the Office of Regulations, Policy and Social Science was discussing regulatory options with the Office of Cosmetics and Colors. Of the attorney assigned to the case, Sadrieh wrote: “She comes from an NGO [nonprofit organization] background. Finally, someone who cares about the public.”

However, by October 2016, scientists felt their efforts were being ignored and stymied by the agency. In an email to Kapal Dewan, a toxicologist in the Office of Cosmetics and Colors, about delays in purchasing Brazilian blowout samples for testing, Sadrieh complained:

I have learned that it is impossible to fight with incompetence, laziness and arrogance. We have to take whatever we can get, and for everything we get, we must fight. To top it off, after we get something, not only will we get chastised in some way, but if there is anything good to be obtained from what we fought for, it will be taken from us, and others will take the credit, simply because that is the only way they can survive.

In December 2016, EWG and Women’s Voices for the Earth, an organization that advocates for salon workers, sued the FDA for unreasonable delay in responding to the 2011 petition. The FDA responded to the EWG Citizen Petition a few months later, in March 2017. The FDA granted the petition in part, and denied it in part by agreeing to review whether to ban formaldehyde but denying EWG’s request to require a warning label. The case was dismissed in 2018 due to procedural issues.

The lawsuit sparked another push for a ban inside the agency. Hours after the lawsuit was filed, Sadrieh said in an email to Dr. Linda Katz, director of the Office of Colors and Cosmetics, “I am quite anxious to get formaldehyde banned.... Let’s just ban the damn ingredient and get on with our lives, right?”

Although the FDA determined internally that formaldehyde-based hair-smoothing treatments are unsafe more than four years ago, the agency has not taken any public steps toward a ban. It has not issued an advanced notice of proposed rulemaking, held public meetings, released a draft risk assessment or included a formaldehyde rule in its regulatory agendas.

It’s unclear why the FDA has failed to act. However, days after the EWG lawsuit was filed, it appears the attorney working on the formaldehyde regulation was reassigned, casting doubt on the fate of the regulation. In a December 16, 2016, email, Sadrieh lamented, “Well, to update you, [the Office of Regulations, Policy and Social Science] has changed the attorney on the formaldehyde reg development and I doubt that anything will now happen, at least in my lifetime.”

A few days later, on December 20, 2016, Sadrieh also expressed exasperation with Phil Chao, an FDA lawyer working on the rule, because he did not seem to grasp the issue or its urgency.

In an email to Katz, she wrote:

I am going to remain calm, but all the questions that Phil Chao had asked, and many many more, have been answered in the review.… How do I convey to Phil that he MUST read the review in its entirety. I did not spend so much of my time and the time of Tyna and Raj and others, to write this extremely comprehensive review. Phil has a history of not understanding what I send him.

Tyna Dao, another FDA toxicologist, also weighed in, writing to Sadrieh, “Man, this is so frustrating. Because you’ve already considered and addressed all these issues YEARS ago. You’ve seen this coming a long time ago, but they keep thinking you’re an idiot. Is this lawyers or just FDA, but wow they are out of the loop?”

In January 2017, President Trump took office with a vow to “deconstruct the administrative state” and a goal to cut regulations by 75 percent or more. One of his first acts was to issue the “one-in, two-out” executive order requiring agencies to offset new regulations with cuts to existing regulations.

The FDA took this imperative seriously, seeking comment in September 2017 on rules to cut. The FDA may have halted new regulations to avoid rescinding old ones. In recent years, there has also been a well-documented chemical industry effort to suppress a decades-long EPA study of formaldehyde, which has largely succeeded. It is possible that the battle over the EPA study spilled over into the FDA and stymied the agency’s proposed ban.

What we do know is that in the past four years, people have been harmed by Brazilian blowout treatments. EWG requested “adverse event” reports from the FDA related to formaldehyde-based hair-smoothing treatments and received nearly 400 pages of complaints. Both consumers and hair stylists complained of harm. For example:

The frustration within the FDA over the slow pace of regulation is warranted. The cosmetics industry and the FDA have long been aware of the risks from formaldehyde in hair-straightening treatments.

The Cosmetic Ingredient Review, or CIR, a research panel funded by the cosmetic industry’s largest trade association, found in 1984 that formaldehyde could not be considered safe “in cosmetic products intended to be aerosolized.” The FDA has known about the risks from Brazilian blowout since at least 2008, when Allure magazine tested products and sought comment from the agency for a story. Records show that by March 2011, the FDA had received more than 70 complaints about hair-smoothing treatments. In September 2011, a CIR panel concluded that formaldehyde-based hair straighteners are unsafe.

That it has taken the FDA so long to take action on a cosmetic ingredient that even industry agrees is unsafe underscores how broken the regulatory system is. Few consumer products are less regulated than cosmetics.

The Food, Drug and Cosmetics Act devotes only a couple of pages to cosmetics regulation, and Congress has not meaningfully updated the FDA’s authority in more than 80 years. The FDA has banned or restricted only nine ingredients in cosmetics for safety reasons.

The Office of Cosmetics and Colors is one of the smallest and most underresourced offices at the FDA, which makes it difficult for cosmetics issues to get attention. In a July 2016 email, Sadrieh complained to Katz that “when the [communications office] people are excited about cosmetics, then things get going. But when the scientists speak, nobody cares. Bloody amazing.”

The good news is that states have not waited for the FDA to act. Last month, California passed a landmark cosmetics bill that would ban a dozen of the most harmful chemicals in cosmetics, including formaldehyde. It was signed into law by Gov. Gavin Newsom.