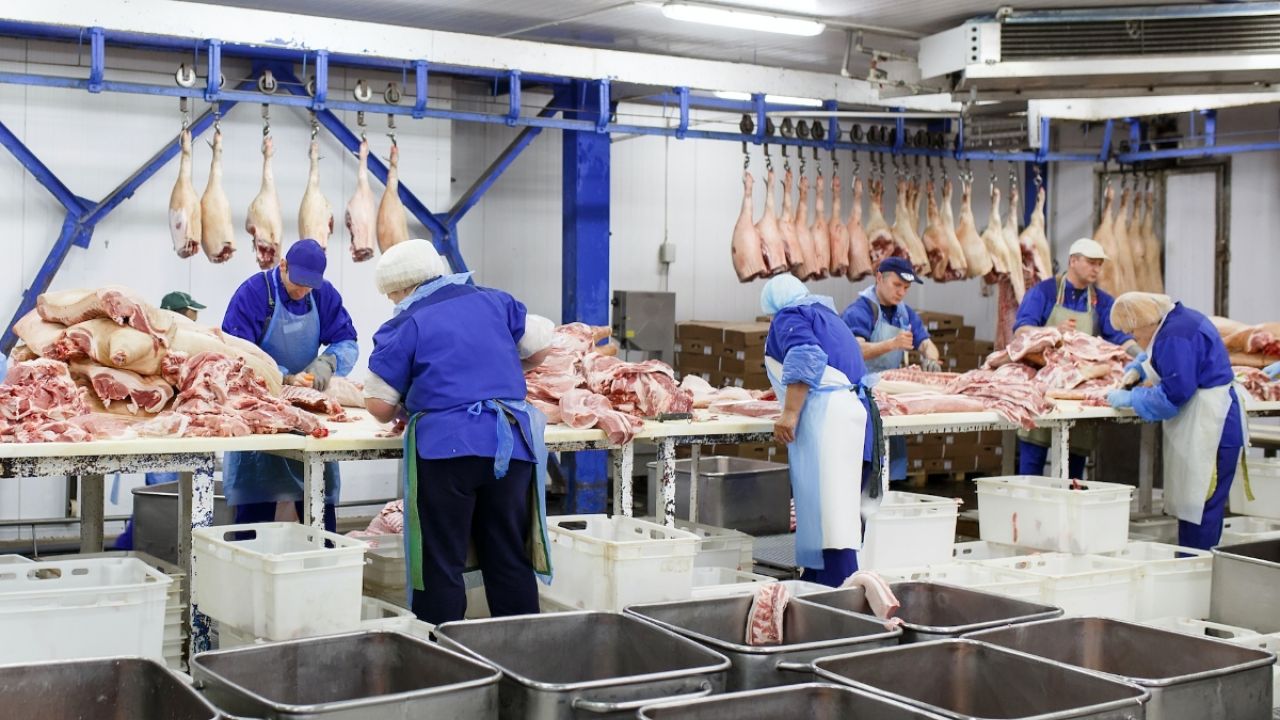 Counties with or near meatpacking plants have almost twice the rate of known COVID-19 infections as the national average, according to a geospatial analysis by the Environmental Working Group.

Based on cases reported by Johns Hopkins University as of May 6, EWG’s analysis found that counties containing or within 15 miles of one or more meatpacking plants reported 373 COVID-19 cases per 100,000 residents. That is roughly double the U.S. average of 199 cases per 100,000 in all counties with reported cases.

EWG’s analysis dramatically quantifies a fact attested to by news reports from across the nation: Meatpacking plants, along with prisons and senior living facilities, are the hottest hot spots for COVID-19 infections.

The interactive map below shows the locations of 106 meatpacking plants in 26 states and a 15-mile radius around each. Counties that fall at least in part within that radius are outlined in red to reflect hot spots. Clicking on a plant location brings up more detail on the facility and the counties. Our finding is bolstered by a Bloomberg report that in the first week after President Trump on April 28 ordered meatpacking plants to reopen, the coronavirus spread in counties with major meatpacking plants at more than twice the national rate of increase.

Meat plant outbreaks are among the largest drivers of the recent eight-fold growth in COVID-19 cases in rural America. Before Trump’s order, at least 30 plants temporarily closed to address their outbreaks, although most have remained open without pause. In at least one state, the governor overrode public health officials to force a plant to remain open.

Because there is no authoritative list of U.S. meatpacking plants, EWG relied on news reports to identify individual plants with known outbreaks. The 15-mile radius represents the average U.S. one-way commute, according to the Department of Transportation. But it’s likely that many meat plant workers commute much farther, especially in rural areas with few other employment options.

Most of the plants on EWG’s map are found in clusters, at least in part because of the increasing consolidation of the meat and poultry industry. The map shows that because the 15-mile radius around meatpacking plants often crosses county or state lines, seemingly isolated case clusters not only endanger one community but can also spread the virus to neighboring counties or states.

For example, on April 30, the Sioux City Journal reported 669 infections at Tyson Foods in Dakota City, Neb. The 15-mile radius around Dakota City includes seven counties in Nebraska, Iowa and South Dakota, which together average 1,000 cases per 100,000 people. Some counties are at especially high risk, because they are within a 15-mile radius of two or more plants, creating a deadly Venn diagram with overlapping zones of potential plant-linked infections.

For example, Tama, Black Hawk and Marshall counties in central Iowa have three meatpacking plants – National Beef Packing in the town of Tama, Tyson Foods in Waterloo and JBS in Marshalltown. The three counties together average 1,483 cases per 100,000 residents. The 15-mile radius around the National Beef and JBS plants overlap in Tama, Marshall and Jasper counties. The total of 9,364 cases for all facilities on the map is undoubtedly a significant undercount. The map shows only plants with confirmed outbreaks. Some states, counties and health districts refuse to release information about which specific facilities have cases. And companies have frequently failed to report outbreaks to their own workers at affected facilities, let alone to the public.

According to the Midwest Center for Investigative Reporting, as of May 12, there have been at least 12,500 reported COVID-19 cases tied to meatpacking facilities in at least 180 plants in 31 states. As of May 12, the Food and Environment Reporting Network’s map of all meat and food processing plant COVID-19 outbreaks shows infections of 13,342 meat industry workers.

EWG’s analysis shows that Nebraska and Iowa have the highest numbers of meat-industry-related COVID-19 cases by far, with eight affected plants in each state.

States With the Most Meatpacking Workers Infected With COVID-19

Source: Compiled by EWG. Facility outbreaks and infected workers from news reports and company press releases, March-May 6. Statewide cases from Johns Hopkins University as of May 6.

The largest number of cases in a single plant EWG found in news stories from March 23 to May 6 was at the Tyson Foods beef-and-pork packing facility, in Logansport, Ind., with 900 infections – almost half of all cases in the seven counties within 15 miles. The Smithfield Foods pork plant in Sioux Falls, S.D., has 800 cases, making up a third of cases in the five surrounding counties.

Meatpacking Plants With the Most COVID-19 Cases

*The number of infected workers reported by the news media exceeds the confirmed cases in nearby counties reported by Johns Hopkins University.

In total, according to the North American Meat Institute, more than 500,000 people are employed at some 7,600 slaughter and processing facilities. Four companies dominate the U.S. meat and poultry industry: JBS USA, Tyson Foods, Cargill and Smithfield Foods.

Meatpacking Companies With the Most Infected Workers

It’s not surprising Tyson has so many outbreaks. In a commentary for Civil Eats, Magaly Licolli of Venceremos, which advocates for the rights of poultry workers, reported that Tyson did not distribute personal protective equipment to its workers until April 23 – more than three months after the U.S.’ first reported COVID-19 case – when more than 5,000 of its workers had been infected.