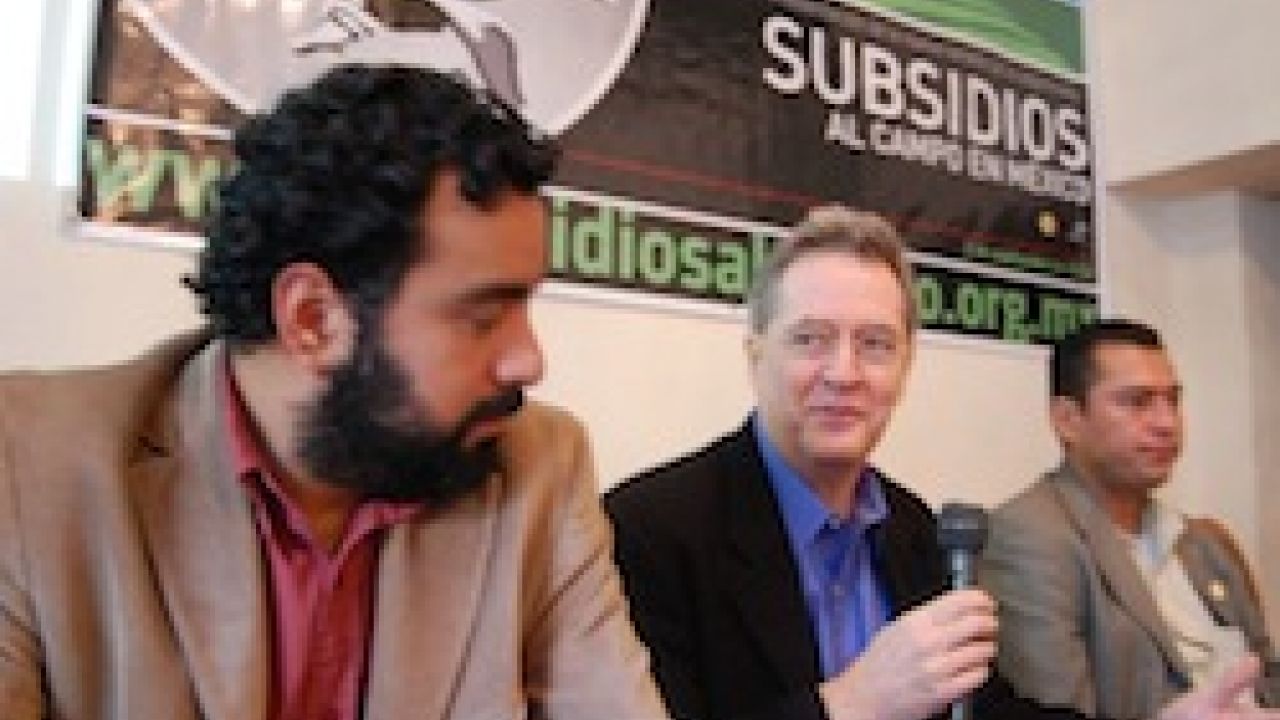 Mexico and the United States have a lot more in common than a border.  Their agricultural and rural policies have strikingly similar flaws–and present parallel opportunities for reform and revitalization.

In a September 1st seminar in Mexico City, a range of international participants concluded that both countries have bloated government subsidy programs whose benefits are captured disproportionately by a few states, individuals and large farms.  As a result, little governmental money is left over for research, market development, infrastructure and credit–key elements for stimulating lagging rural economies and bolstering production of healthy, sustainable and affordable food for local and domestic markets.  Worse, subsidy programs that dole out cash based on acreage encourage industrial-scale farming, exacerbating social injustice and environmental damage.

The seminar was organized by the National Autonomous University of Mexico, FUNDAR, a government policy watchdog, and ANEC, a leading producer organization. After the meeting, FUNDAR and ANEC released an updated and expanded Mexican farm subsidy data base, which documents who gets what from government subsidy programs. Modeled after the Environmental Working Group’s farm subsidy data base, these non-governmental organizations (NGOs) have used recently enacted transparency laws in Mexico to establish the data base, bringing a new level of accountability to agricultural policy debates in Mexico.

The day-long seminar brought together academics, Mexican government officials and representatives of diverse organizations like the World Bank, Inter-American Development Bank (IDB), World Wildlife Federation Spain and EWG, FUNDAR’s partner in the subsidy database venture.    Although the attendees came from different perspectives, they formed an overwhelming consensus that Mexican agriculture urgently needs a long-term vision based on public investment and public benefit.  The status quo, characterized by large subsidy payments to big farms and corporate entities, is unfair and ineffective, the participants agreed.

Mexico’s most important subsidy programs, PROCAMPO and Ingreso Objectivo, were put in place to compensate Mexican producers for the losses they would face from the North American Free Trade Agreement, which went into effect in 1994.  But 16 years later, unemployment and hunger are rampant, three-quarters of the rural population lives in poverty, and small-scale producers have virtually no access to credit, technical assistance, or marketing support.

Ernesto López-Córdova, the IDB’s lead economist for Mexico, offered a strong, and unexpected critique, given the IDB’s historic and ongoing support for Mexico’s subsidy programs. He declared bluntly that those programs had become inefficient, inequitable and regressive and had failed to invigorate Mexican agriculture, whose agricultural growth rate, he said, is only second to Haiti in Latin America. Echoing other civil society and academic speakers, López-Córdova advocated that public funds be funneled instead into infrastructure, agriculture research, food safety and other programs that would increase competiveness and generate a greater public good.

Not surprisingly, in his remarks, Jose Miguel Palacio, general finance director from ASERCA–the agency that administers the largest subsidy program–did not immediately embrace this consensus. However, several days later, Mexico’s agriculture ministry announced important changes in its budget proposal for 2011, calling for a shift in government funds out of individual subsidies and into programs to support infrastructure, better management of natural resources, food safety, research and technical assistance and increased access to local and international markets.   Speaking at a global forum on food and agriculture, Francisco Mayorga Castañeda, Mexico’s Secretary of Agriculture, Livestock, Rural Development, Fisheries and Food, said that the government hoped this new policy focus would reduce inequality and combat the impact of climate change.

Advocates for reform are likely to support the Mexican government’s new direction only if there are explicit guarantees it will directly benefit small and medium-size farmers. In a passionate closing speech at the seminar, ANEC leader Victor Suarez, one of Mexico’s most eloquent spokesmen for small farmers, harshly criticized the government and the IDB for failing to invest in rural agriculture over the past 20 years. Suarez said the productive capacity of small farms must be enhanced in order to restore Mexico’s food security and food sovereignty. Over the past decade, Suarez said that Mexico has seen its food imports increase to 40 percent of total imports. For years, he said, the government has dismissed the productive potential of small producers, with dire consequences for poverty, unemployment and food insecurity among Mexico’s rural communities.

While each nation faces its own needs and challenges, we have to ask the same questions about U.S. agriculture policy. Are subsidy payments to individual farmers the best way to use scarce public resources? Does it make sense to continue to give US farmers over $4 billion annually in direct payments whether they produce or not? In California, does it make sense to invest just a few million dollars in organic agriculture while we give $200 million a year to upland cotton growers, even though their production has declined 80 percent over the past five years, generating just $105 million in 2008. Can’t we muster the political will to do something better with our scarce resources?

Unfortunately, logic and public interest do not guide agriculture policy in the U.S. or Mexico. In both countries, industrial-scale growers, corporate entities, and rural financial interests wield great influence over the politicians who make decisions about agricultural policies–with the result that politics trump good public policy almost every time.