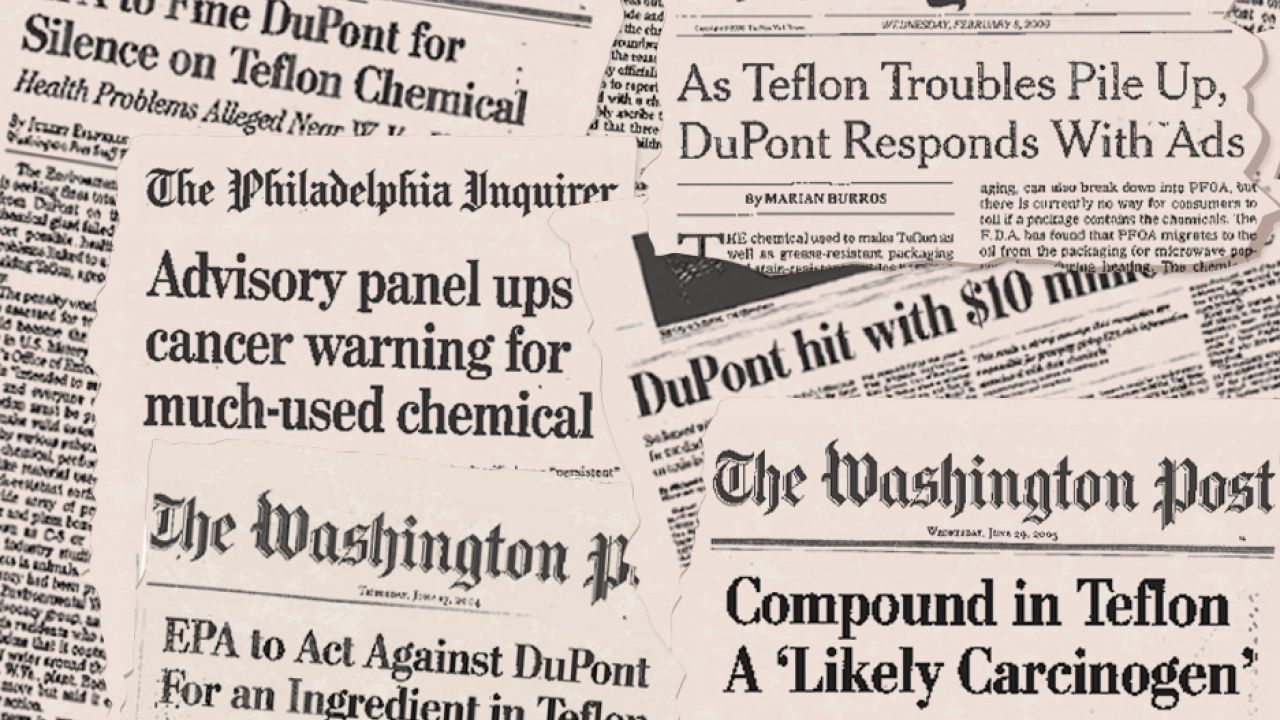 “Dark Waters,” the story of how DuPont dumped a toxic Teflon chemical called PFOA in a small West Virginia town and covered it up for decades, opens nationwide today. Reviewers have raved: The New Yorker calls it “a stirring and infuriating story of brazen corporate indifference to employees, neighbors, and the world at large.”

The film stars Mark Ruffalo as attorney Rob Bilott, who worked doggedly to expose the scandal. The Environmental Working Group was the first advocacy organization to bring national attention to PFOA and the larger class of fluorinated chemicals known as PFAS, which have contaminated water and human blood around the world. But dedicated reporters have also covered the story from the start. As it reaches a wider audience, they deserve recognition – and thanks.

The first threads of the story were about PFOA’s close chemical cousin PFOS, an ingredient in 3M’s Scotchgard. 3M also made PFOA for DuPont.

In May 2000, David Barboza of The New York Times reported that 3M would voluntarily stop making PFOS “after tests showed that [it] . . . lingers in the environment and in humans for years.” The next day, he reported the action wasn’t exactly voluntary: “[Environmental Protection Agency] officials said that if 3M had not acted they would have taken steps to remove the product from the market.”

Bilott was then trying to find out what was killing cattle on a farm near DuPont’s Washington Works plant in Parkersburg, West Virginia. Barboza’s articles prompted Bilott to dig into PFOS, which led him to PFOA, known inside DuPont as C8.

In March 2001, Bilott sent his findings to the EPA. In August, he filed a class-action lawsuit against DuPont on behalf of 70,000 mid-Ohio River Valley residents whose drinking water was contaminated with PFOA. The first news stories about the case appeared in early 2002.

In March 2002, Ken Ward Jr. reported in The Charleston (West Virginia) Gazette that DuPont “would replace drinking water for all Parkersburg-area residents whose water contains more than 14 parts per billion of a mysterious chemical called C-8.” (Some independent studies now say a safe level of exposure to PFOA in drinking water is 1 part per trillion.)

Ward, a West Virginia native, remains at the paper and also contributes to the ProPublica Local Reporting Network. In 2018, he received a MacArthur Foundation fellowship for “revealing the human and environmental toll of natural resource extraction in West Virginia.” In a recent email, he wrote:

The DuPont C8 story is exactly the sort of story that makes local journalism so important. Aggressively covering that story, and others like it, has made the Gazette-Mail a target of strong criticism from business boosters and political leaders in West Virginia for many years. But serving as a check on powerful interests is the main reason we’re here. My only regret is that we didn’t do more stories – and sooner – about what was happening in the communities around Parkersburg and the DuPont Washington Works.

Another pioneer in PFOA reporting was Callie Lyons of The Marietta (Ohio) Times. Her September 2003 series reported that DuPont secretly detected PFOA in area water systems decades earlier, but “only recently has the public come to learn that the unregulated chemical may be a health risk, a concern company documents show was shared by DuPont years ago even though the company never shared those concerns publicly.”

Lyons wrote the first book-length history of the scandal, and has since worked as a freelance writer, in radio and podcasting, and has written a novel. She recently wrote:

There was no way for us to know at that time how the contamination would affect people all over the world or that industry already knew it was causing serious health problems. This family of lethal substances remains unregulated to this day, but hopefully the tide is turning with a new wave of awareness.

Michael Hawthorne of The Columbus (Ohio) Dispatch got wind of the story from a scientist he was working with on an unrelated investigation of coal plant pollution. His February 2003 story reported: “Amid growing concerns about the persistence of C8 in humans and its potential health effects, the U.S. Environmental Protection Agency launched an investigation in September to determine a national standard for the chemical. A decision is expected later this year.”

Almost two decades later, the EPA has yet to set a standard.

Hawthorne is now at the Chicago Tribune, where he’s done groundbreaking investigations of toxic flame retardants and other chemicals. He wrote:

My understanding of the nation’s deeply flawed chemical safety system increased exponentially after I began digging into PFAS chemicals. Ongoing efforts by journalists to expose health and environmental damage caused by PFAS chemicals highlight the importance of investigative journalism, as well as the critical roles played by attorneys and nonprofit groups speaking truth to power.

Many other reporters did important early work, including Fred Biddle of The News Journal in Wilmington, Del.; Juliet Eilperin of The Washington Post; Elizabeth Weise of USA Today and Brian Ross of ABC News.

All were key to telling the story of what “Dark Waters” star Ruffalo calls “one of the greatest corporate criminal acts in our history.” But as journalists, they all probably agree with Ken Ward: “The real heroes in this story are the brave local residents who stood up to a powerful company, and the skilled lawyers who remind us of the important role the civil justice system can play in our country.”