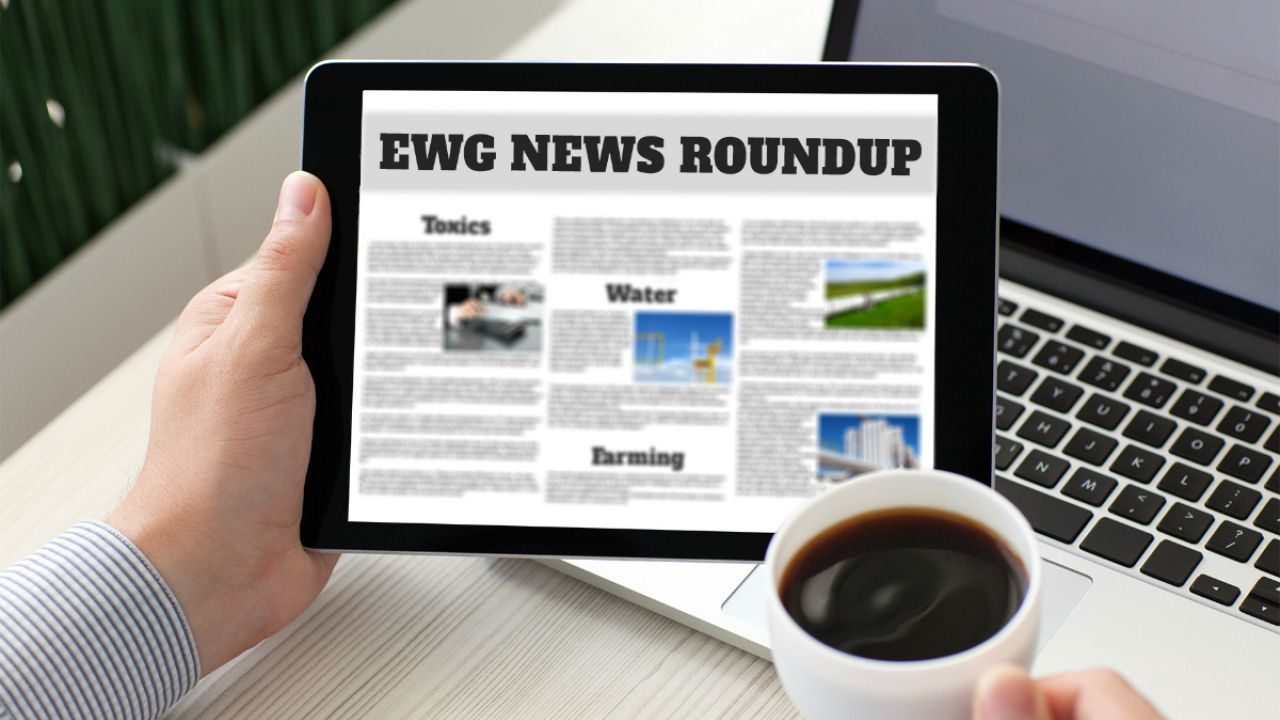 From the moment President Trump nominated Michael Dourson to run chemical safety at the Environmental Protection Agency, EWG has been pushing back by documenting his decades-long work as a chemical industry apologist. This week, Dourson announced that he was giving up his EPA bid after it became clear that he didn’t have the Senate votes to be confirmed.

“The demise of the Dourson nomination shows party allegiance has its limits when it comes to protecting our drinking water and children’s health from dangerous pollutants linked to serious and lasting health problems,” EWG’s Senior Vice President of Government Affairs Scott Faber said of the bid being defeated.

We also took time to applaud the state of California for providing its residents with guidelines for safe cell phone use. Many of the tips align with what EWG has been saying for years.

Following up from our discovery last week that 31 members of Congress collect traditional farm subsidies – we did some fact checking of recent claims by Rep. Doug LaMalfa, R-Calif., trying to dismiss our findings.

Never too far from our sights, we dug into the recent news that the Inspector General at EPA has launched an investigation into $25,000 in taxpayer dollars to purchase his soundproof phone booth. We also sent a letter urging Toyota North America to turn down any offers to partner with Pruitt’s EPA – something Pruitt mentioned during a House hearing last week.

By partnering with Mr. Pruitt’s EPA, you are aiding and publicly aligning yourself with his irresponsible agenda…I urge you to completely disassociate Toyota from Mr. Pruitt’s testimony and any “partnership” in his relentless campaign to “manage” EPA into the ground,” wrote EWG President Ken Cook to the head of Toyota North America.

For coverage on these developments and more, here’s some news you can use going into the weekend.

Rep. Doug LaMalfa, R-Richvale, received over $1.7 million in traditional farm subsidies from 1995 to 2016, the most of current members of Congress, according to a report released Thursday by the Environmental Working Group, a not-for-profit organization. Reprinted by Oroville Mercury Register.

Billings Gazette: Tester and Gianforte among 33 members of Congress who got farm subsidies in the past 21 years

Between 1995 and 2016, her family-owned Racota Valley Ranch in Hazel, South Dakota deposited over $3.7 million in government farm subsidies. In 2012 alone, they cashed $232,707 in subsidy checks, according to the Environmental Working Group Farm Subsidy Database.

Watchdog groups American Oversight and the Environmental Working Group announced this month a joint investigation to determine if Dourson has violated ethics rules by advising the agency before being Senate confirmed.

Ken Cook, president of the Environmental Working Group, said Pruitt will have to turn to elementary school students to staff his team of climate change deniers. “Just off the top of our heads, we know some first graders who, like Pruitt, don't understand why if the climate's heating up, it can still snow during Christmas break," Cook said. "With the promise of snacks and a chance to get a peek of Pruitt’s secret phone booth, I’m sure they could be lured off their scooters and swing sets to help.”

"The driving force behind TSCA reform was frustration around the thousands of existing high priority chemicals that really had not undergone any meaningful evaluation in the last 40 years," said Melanie Benesh, legislative attorney at the Environmental Working Group (EWG).

Letter to Toyota on EPA Partnership

POLITICO: Don’t Do It!

The Environmental Working Group is urging Toyota in a letter not to enter into a management partnership with EPA as Pruitt suggested the automaker was going to do at a congressional hearing last week. “By partnering with Mr. Pruitt’s EPA, you are aiding and publicly aligning yourself with his irresponsible agenda,” EWG President Ken Cook wrote, warning Toyota it risked “irreparable harm” to its brand by pairing with Pruitt.

CleanTechnica: Environmental Working Group Warns Toyota About Its Promise To Clean The Environment On Its Website

The Environmental Working Group is urging Toyota to reject a partnership with the U.S. Environmental Protection Agency, because EPA chief Scott Pruitt's plan to "evaluate management practices" is cover for his real agenda of destroying the agency's ability to do its job. Reprinted by EnvironmentGuru.

According to the Environmental Working Group, a co-sponsor of the California legislation, only 7 percent of cleaning products adequately list ingredients. Originally published by Bloomberg News.

Buzzfeed: 30 Gifts For Anyone Who Wants Better Skin

"I only use natural beauty products and I check all my products on EWG.org, a website that rates beauty products based on harmful ingredients such as synthetic fragrances and artificial colors.”

Reader’s Digest: Your Beauty Products Could Be Sabotaging Your Fertility—Here’s How

“Eyeshadow, foundation, facial powder, bronzer and blush account for nearly 80 percent of the products with PFCs,” according to the Environmental Working Group (EWG), a non-profit organization dedicated to protecting human health and the environment. The EWG has come up with a list of 266 products that contain PFCs, from eyeshadow to shaving cream to lip balm.

Collagen is a naturally-occurring protein that is the building block of skin, and helps repair wounds and keep skin supple. But most collagen used in beauty products is derived from the connective tissue of animals, according to the Environmental Working Group (EWG).

Shape: 4 Signs You're Using Too Many Beauty Products

Looking up your products on the Environmental Working Group's Skin Deep cosmetics database can also provide a clearer picture of possible irritants.

Like microbeads, those ingredients can end up in waterways. “The big issue with man-made plastic ingredients in cosmetics is that generally very little thought has gone into the complete lifecycle of the product,” says David Andrews, a senior scientist at the Environmental Working Group, a nonprofit that researches health and environmental issues in consumer products. Reprinted by True Viral News.

The Environmental Working Group Food Score’s Database highlights that some of the most popular juice brands contain at least eight spoons of sugar or even more per serving.

The Environmental Working Group, a nonprofit research and advocacy organization, ranks fruits and vegetables based on the amount of pesticide residue left after proper washing and preparation in its “Dirty Dozen” and “Clean Fifteen” lists. Reprinted 64 times.

Care2: Your Organic Food Might Have a Dirty Secret

If those reasons are for the health benefits, many factors impact the nutritional value and pesticide levels of foods. To avoid pesticides, consumers can consult the “Dirty Dozen” and “Clean Fifteen” lists compiled by the Environmental Working Group.

Tasha Stoiber, a senior scientist at the Environmental Working Group, comments on the potential for ongoing risks after the pipes are flushed and long-term exposure to PEX pipes. “We don’t have clear answers here yet as there are not a lot of long-term data,” Stoiber explains.

Fairwarning: Fluoride in the Water: Too Much of a Good Thing?

No up-to-date government figures exist on the number of Americans exposed to drinking water fluoridated to above that point, but the advocacy and research organization Environmental Working Group estimates that, as of 2015, the figure was 28 million. Reprinted by Industrial Safety & Hygiene News and The Oregonian.

Columbus City Utilities has been investigating the contamination since late August, after a report published by the Environmental Working Group showed the city’s water had a higher-than recommended level of the contaminant in its drinking water four years ago.

The Environmental Working Group (EWG), a nationwide advocacy group that focuses on chemicals in drinking water and consumer products, praised the bill. "Federal drinking water regulations are failing to protect the public but states do not have to rely on this broken system," said David Andrews, a senior EWG scientist.

In addition, everyone would be well served by following the Madrid Statement's recommendation to avoid products containing, or manufactured using, PFASs, which includes most that are stain-resistant, waterproof or nonstick. More helpful tips can be found in the Environmental Working Group's (EWG) Guide to Avoiding PFCS.

November 19, 2021
If you’re traveling with kids this holiday season, chances are they’ll use some type of wireless device for entertainment for at least part of the trip.