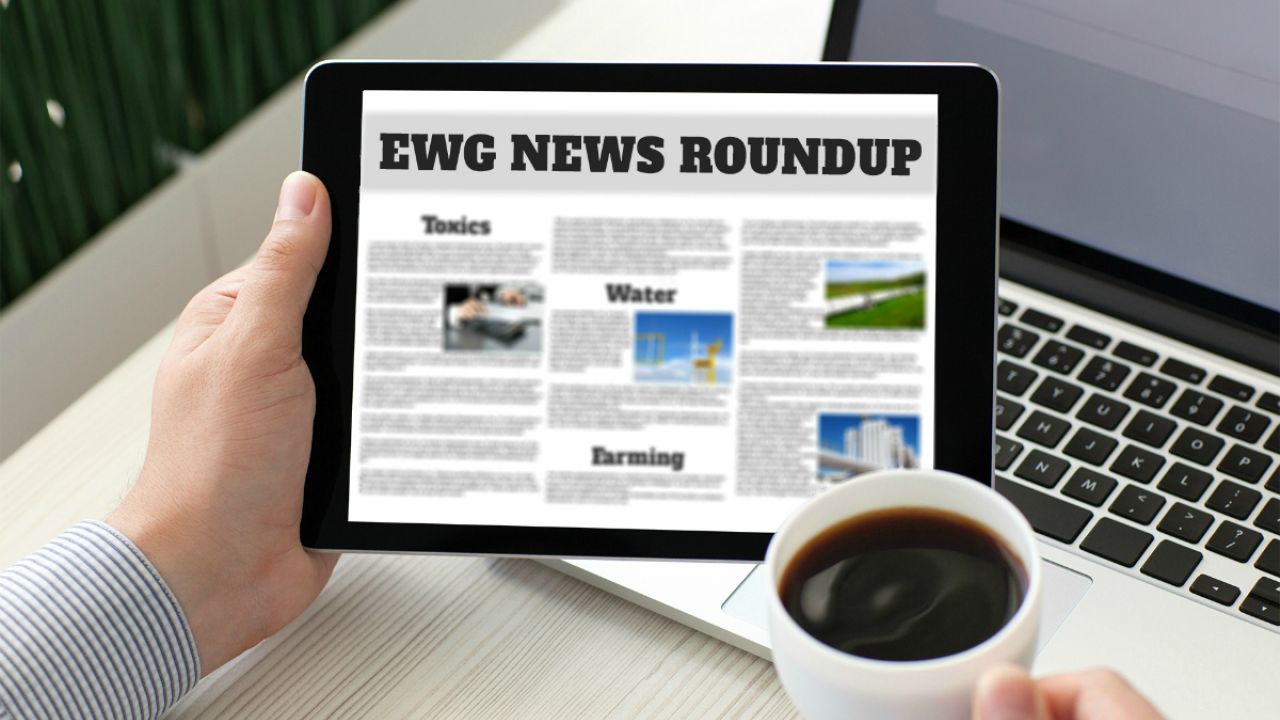 The first analysis reveals significant flaws in the Department of Agriculture’s Conservation Reserve Program, or CRP.

Using data compiled from the USDA’s Farm Service Agency, EWG mapped the total cropland taken out of the CRP by farmers, as well as the investment lost to taxpayers between 2007 and 2014 as crop prices soared. When farmers decide to take land out of the CRP, the money spent on environmental and public health improvements on that land is largely wasted, as the environmental gains made are significantly reversed.

In the second report, EWG collaborated with Northeastern University to plot every known detection of highly fluorinated toxic chemicals, known as PFCs or PFASs, in the drinking water of 15 million Americans in 27 states, and from more than four dozen industrial and military sources nationwide.

“This is a one stop shop to track how pervasive the PFC contamination problem is in the U.S.,” said Bill Walker, a co-author of the report and EWG’s managing editor.

And to wrap up the week, David Andrews, one of EWG’s senior scientists, joined Ira Flatow on NPR’s Science Friday to talk about sunscreens and sun safety.

Here’s some more news you can use as you head into the weekend.

NPR: U.S. Pays Farmers Billions To Save The Soil. But It's Blowing Away

According to Cox, when farmers decide to take land out of the CRP, it means that most of the money spent on environmental improvements on that land is wasted. "The benefit is lost really quickly," he says.

"It's a much larger number than we thought before," said Bill Walker, managing editor of Environmental Working Group. Also covered in USA Today.

Fast Company: This Map Will Remind You Why You Can’t Always Trust Your Tap Water

“The response to this level of pollution is really just outrage,” David Andrews, a senior scientist at EWG, tells Fast Company. “These are chemicals that federal agencies have known is extremely toxic for decades, but our system of drinking water regulation is inept at setting any new standards.”

“It’s imperative that people reach out to their local government officials and water utilities and express their concern [about PFCs], because this is a contaminate that shouldn’t be in the water at any level,” said David Andrews, senior scientist at the EWG. “The ultimate solution is to stop the pollution from entering the water at the source, that’s why the identification of the pollution sites is an important first step…and part of the reason why we’ve mapped these pollution sites.”

“There’s a significant body of evidence out there indicating that these are chemicals you don’t want in your drinking water,” Walker told HuffPost. “They might be, and likely are, having a human health impact at extremely low concentrations. We don’t need anymore.”

“What that means is the prevalence is likely much more common, especially in very industrialized areas,” Andrews said. Andrews also said that although it’s no longer made in the U.S., manufacturers are now using alternatives, which he says could pose similar dangers.

MAPPING DRINKING WATER CONTAMINTS: The Environmental Working Group is out this morning with new research and an interactive map showing the 47 locations across the country where toxic chemicals known as PFCs or PFASs have been detected in drinking water. All told, the group estimates the contaminants — used in Teflon manufacturing and firefighting foam — are in 15 million Americans’ drinking water at some level. EPA has told local water officials that levels of PFCs above 70 parts per billion are likely unsafe, but has issued no federal regulation for the contaminants.

Alabama has the second-highest number of water systems in the nation where contaminants called perfluorinated chemicals or PFC’s have been detected in the drinking water, according to a new report. The Environmental Working Group, an advocacy organization, in conjunction with researchers at Northeastern University, released the findings today showing the extent of US drinking water pollution.

"Of the 47 locations where the source of contamination is known or suspected, 21 are military bases, 20 are industrial facilities and seven are civilian firefighting sites. Some locations have multiple sources of contamination," the EWG says.

WTNH: Up to 15 million Americans are potentially drinking tainted water

It appears up to 15 million Americans may be drinking tainted water according to a study released by Northeastern University and the Environmental Working Group.

In just four months in office, President Donald Trump has betrayed many of the Americans who believed his campaign promises. Last week, he betrayed the planet,” wrote Cook. “Trump’s foolish decision to pull out of the Paris climate change agreement — a pact endorsed by almost every other nation on Earth — is yet another sign that he is exceptionally unfit for the job.

I remember going to an event at Tata Harper’s house where I sat next to Rose-Marie Swift, founder of RMS Beauty, and learned about the start of something then-unknown, called the Environmental Working Group. We were all intrigued to hear that they would be starting an online catalogue of potentially hazardous ingredients in beauty products. Now, many years later, green beauty is leading the pack, with all major mainstream brands getting in on it."

MindBodyGreen: The Unexpected Thing Putting Your Thyroid Health At Risk

You can also download the Environmental Working Group's Skin Deep App, which is basically a big database that ranks cosmetic products, telling you exactly what's in them so you can make thyroid-friendly decisions.

Well and Good: What exactly is crystal deodorant—and does it work?

No studies have directly proven the element in its organic state to be harmful, but it’s still caused some controversy among natural-beauty devotees. Even so, many doctors in the cancer treatment community recommend Crystal to their patients over conventional antiperspirants, and the Environmental Working Group continues to give Crystal’s sticks and sprays top marks for non-toxicity.

Science Friday: Is Your Sunscreen Living Up To Its Promise?

Sunscreen use is on the rise, but so are cases of skin cancer. That’s because a poor-quality sunscreen might keep you from getting a sunburn, but it won’t shield skin from UVA rays that cause melanoma. Recently, scientists with the Environmental Working Group tested almost 1,500 sunscreens, moisturizers, and lip balms that advertise sun protection. They found that 73 percent of those products don’t provide the protection consumers think they’re getting. David Andrews, a senior scientist at the Environmental Working Group, joins Ira to discuss.

Last month, the EWG released its 11th annual sunscreen guide, which analyzed more than 880 beach and sport sunscreens, as well as 480 moisturizers and 120 lip products containing SPF. The Washington, D.C.-based research group found that roughly 73% of the products it tested either contained "worrisome" products or they did offer the level of UV protection they advertised.

Popsugar: According to Experts, These Are the 15 Safest Sunscreens

The Environmental Working Group (EWG) has extensively tested thousands of brands of sunscreen to compile its list of the safest beach and sports sunscreens for 2017. They are rated from one to 10, with zero to two being considered "low hazard." Below are just a few that made the list with a level-one rating. You can learn more about how they were rated here.

According to the sunblock's bottle, the product is pediatrician tested and recommended by the Skin Cancer Foundation. However, another Banana Boat product, Banana Boat Kids Max Protect and Play Sunscreen Lotion, SPF 100, made Healthy Child's list of the 13 sunscreens with the worst EWG ratings for 2016. Additionally, the Environmental Working Group takes issue with spray sunscreens in general due to potential lung inhalation.

Popsugar: Is Your Sunscreen Safe? You Better Read This Before You Apply

According to the Environmental Working Group, an organization that researches and educates consumers about toxins in personal care products, there are specific ingredients you should avoid in sunscreens. The most important is oxybenzone. It is known as an "endocrine disruptor," which means it can interfere with our body's normal hormone functions.

Prevention: 6 Best Mineral Sunscreens You Can Get Online Or At A Drugstore

Just last year, the Environmental Working Group found nearly 75% of sunscreens they examined for their annual guide contained harmful ingredients such as oxybenzone, which studies indicate may trigger allergic reactions, disrupt hormone functions, and contribute to the deterioration of coral reefs (it's one of the reasons chemical sunscreens are one of the 8 most toxic things on drugstore shelves).

Rodale’s Organic Life: The Safest (And Most Toxic) Sunscreens Of 2017

"The consensus among scientists is that sunscreens alone cannot reverse this trend [of the rising rate of melanoma diagnoses]," the report states. "Yet a good sunscreen can play a role in preventing sunburns that are a major risk factor for melanoma—provided you use it correctly."

Sacramento Bee: Most sunscreens are ineffective or harmful, report says. Here are the worst offenders

The report by the Environmental Working Group looked at 880 sunscreens and found that 73 percent of them were ineffective or contained “worrisome” ingredients such as oxybenzone and retinyl palmitate. The former can cause hormone issues and the latter can potentially increase the risk of skin cancer.