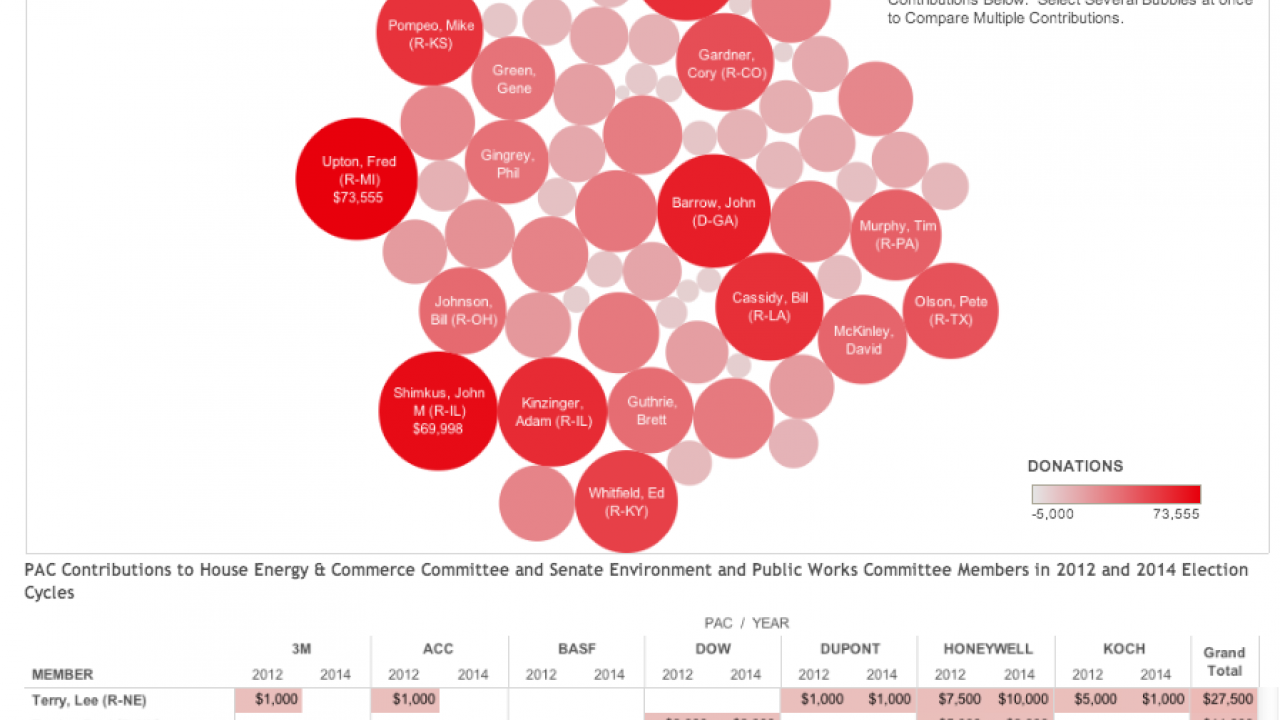 The American Chemistry Council, a trade association of major chemical makers, is among the largest donors to a fund created to support Sen. David Vitter’s campaign for governor of Louisiana.

Vitter (R-La.) is the architect of S. 1009, the Chemical Safety Improvement Act, legislation that would weaken chemical safety laws by blocking state efforts to regulate chemicals.

The American Chemistry Council donated $100,000 to the Fund for Louisiana’s Future, a Super PAC created to support Vitter’s bid for governor. Earlier this month, a judge ruled the Super PAC could collect unlimited campaign donations. To date, it has reported taking in almost $1.7 million.

The American Chemistry Council made the donation to the Vitter Super PAC less than two months after Vitter introduced the Chemical Safety Improvement Act, a bill backed by the chemical industry that would weaken regulation of toxic chemicals.

As EWG reported last week, political expenditures and donations by the American Chemistry Council and individual chemical companies have surged over the past 18 months as some Senate and House lawmakers have proposed bills to gut the outdated, loop-hole riddled Toxic Substance Control Act of 1976.

EWG’s ground-breaking analysis found that House Speaker John Boehner (R-Oh.) was the largest recipient of donations from ACC and large chemical giants like Dow and DuPont.

Both Vitter’s Chemical Safety Improvement Act and the Chemical and Commerce Act, draft legislation developed by Rep. John Shimkus (R-Ill.) would cripple state efforts to regulate dangerous chemicals and tie the EPA in knots. The Senate bill would go further by blocking people injured by toxic chemicals from going to court to recover damages from chemical companies. Both bills would hobble EPA efforts to ensure that chemicals are safe.

Based on data provided by the Center for Responsive Politics and company and association lobbying disclosure forms filed with the House of Representatives and Senate, EWG found that Dow, DuPont, BASF, 3M, Honeywell and Koch Industries and the companies they hire to lobby Congress spent $48.6 million last year to lobby legislators, up from $39.6 million in 2010.

These six companies and the American Chemistry Council, the industry trade association, spent $63 million on lobbying last year, up 27 percent from $49.7 million in 2010.  This figure includes spending by companies hired by the trade group and the chemical companies to lobby Congress.

Like lobbying expenditures, political contributions by chemical companies and the ACC have surged in recent years.

Over the course of the 2012 election cycle, these companies and the trade association gave over $1 million to members of Congress on House and Senate committees with jurisdiction over chemical safety laws. In this year's election cycle, these companies and their association have already given $549,599 and are on track to double their contributions when compared to 2012.