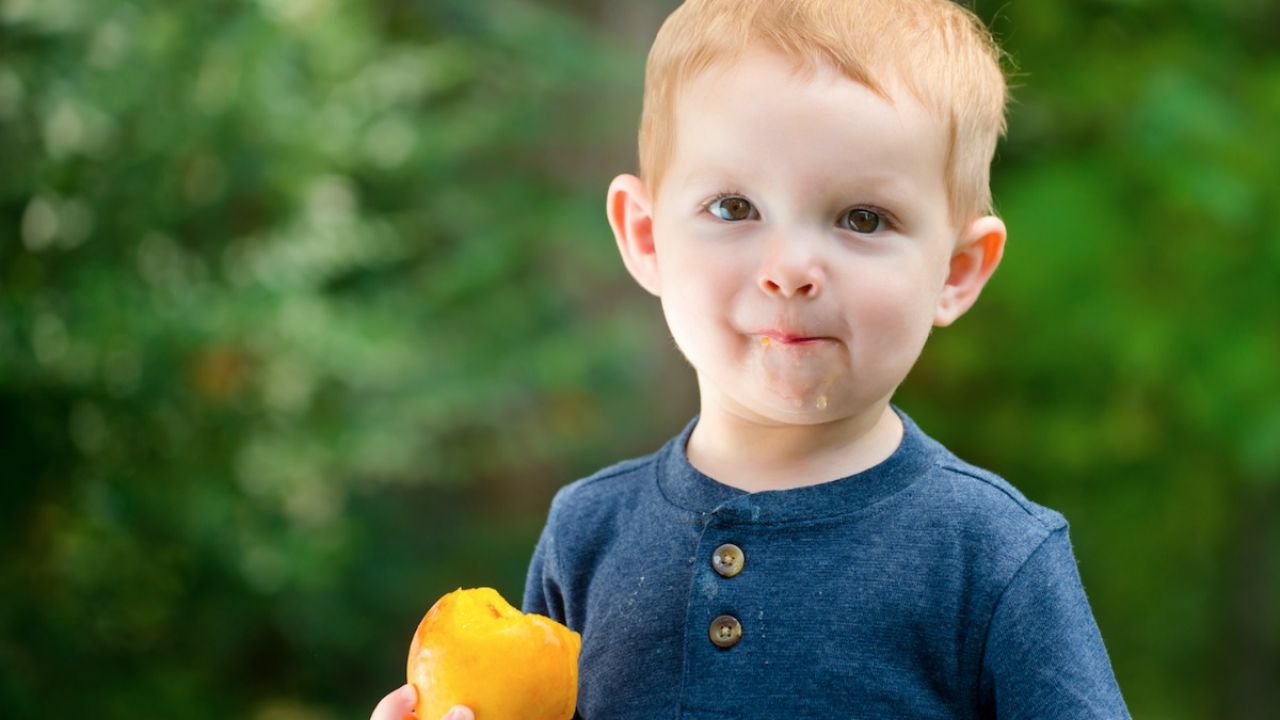 The nation’s non-organic fruit and vegetable growers are throwing their weight behind efforts to undo the Environmental Protection Agency’s ban on spraying produce with a pesticide known to harm to children’s brains.

It’s a disappointing misstep by the companies people rely on to provide them with cherries, beets and more grown without residues of the pesticide, known as chlorpyrifos. In letters to the EPA and litigation fighting the ban, the companies warn it will lead to crop shortages – even though organic producers don’t use pesticides and can still make produce available.

On August 18, 2021, the EPA announced it was pursuing a ban on all uses of chlorpyrifos on food to protect public health and sought public comment on the plan.

But produce growers weren’t – and still aren’t – necessarily on board.

Even though the EPA’s decision is right for public health, some growers are supporting a lawsuit now being heard in the 8th U.S. Circuit Court of Appeals. An industry coalition fired the opening salvo in the case, which claims the pesticide ban lacks any scientific basis, says recent reporting by The New Lede, EWG’s independent journalism initiative.

National and state groups representing produce growers signed on to the May 24 legal filing. Dozens more tried to block the ban while the EPA was still considering it.

Shortly after the EPA ban was announced, on October 19, 2021, more than 80 agribusiness groups, including the International Fresh Produce Association, or IFPA – which represents U.S. fruit and vegetable growers – made the disturbing decision to send a letter to the EPA asking it to reverse the decision.

Most consumers are probably not familiar with the IFPA, but its members are household names, including Driscoll’s, Safeway, Albertsons, Dole and many others.

EWG believes consumers have the right to know the nation’s non-organic, or conventional, produce growers actively pressured the EPA – despite the abundant science – to drop its concerns about children and farmworker health and allow the industry to continue spraying chlorpyrifos on the food they feed themselves and their families.

Propping up a tired industry playbook

In the October letter to the EPA, the conventional fruit and vegetable industry’s main grievance with a chlorpyrifos ban was how it would hurt profits. The letter argued produce growers, grocery store chains and others would see their bottom lines take a hit if the crop chemical was stripped from the agribusiness toolbox because of the risks it poses to children, pregnant women and farmworkers.

The letter alleged that without chlorpyrifos, crops would be difficult to grow: “These pests can inflict yield losses as high as 60 percent if left unchecked. For growers who face these pests, there is no one-to-one replacement for chlorpyrifos – it is the only option that will control” the two types of pests that affect certain crops, the letter said.

Of course, the organic agriculture sector, which grows the same crops without applying chlorpyrifos and other synthetic pesticides, seems able to yield plenty of produce.

The organic sector grows its part of the economy by double digits nearly every year. In 2020, the Organic Trade Association said, “organic food sales surpassed $56 billion, up 12.8 percent” from 2019, “the highest rates recorded in organic in well over a decade.”

The industry letter also argued that banning chlorpyrifos will force farmers to toss good produce in the trash: “We also object to this rule on the grounds that its implementation will likely force the disposal of significant volumes of safe, legal food and feed products.” 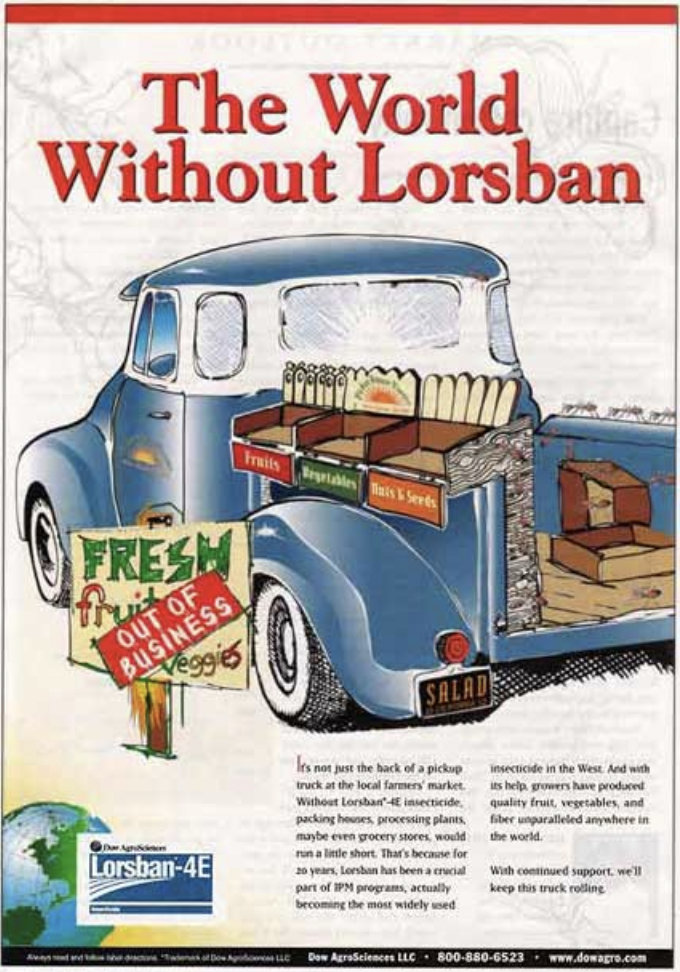 Chlorpyrifos was marketed for decades by Dow AgroSciences under the names Lorsban and Dursban. Years ago, the industry ran an advertisement with the tagline “The World Without Lorsban,” which predicted a barren world devoid of fresh fruits and vegetables, with farmers’ trucks idling empty, if producers were blocked from using the pesticide.

Yet as science uncovers their dangers, dozens of synthetic pesticides once widely used on food have been banned or otherwise phased out, yet – lo and behold – it’s still possible to buy plenty of affordable fruits and vegetables in parts of the country where they were available before these toxic chemicals were barred from use.

Years from now, with chlorpyrifos in the rearview mirror, there will still be an abundance of affordable fresh produce available at most grocery stores, co-ops and farmer’s markets.

Research has linked chlorpyrifos to nervous system damage, behavioral problems and lower IQ in young children whose mothers were exposed during pregnancy.

In adults, low-level exposure to chlorpyrifos can cause nausea, headaches and dizziness. Farmworkers and others who experienced severe exposures have suffered vomiting, muscle cramps, diarrhea, blurred vision, loss of consciousness and even paralysis.

Due to these risks, the Obama EPA was poised to ban chlorpyrifos in 2015. But shortly after the 2016 election, Dow AgroSciences launched an aggressive campaign to block the ban. On March 29, 2017, since-disgraced Trump EPA Administrator Scott Pruitt rescinded the prohibition, just before it would have taken effect.

Then, in June 2017, EWG and the American Academy of Pediatrics sent a letter calling on Pruitt to “revoke all tolerances for chlorpyrifos, as proposed in 2015. America’s children today and in the future deserve and demand no less.”

After President Joe Biden was sworn in, the EPA changed course again and pushed ahead with banning chlorpyrifos. On February 28, 2022, the ban finally went into effect, making it illegal to apply the pesticide on any food or feed crops.

EWG thanks the Biden EPA for its decisive action, and the tireless work by our colleagues at the Natural Resources Defense Council, Earthjustice, Pesticide Action Network and many other environmental and farmworker justice advocates, who spent many years and considerable resources to protect future generations from exposure to this neurotoxic pesticide.

Even after more than 50 years of legally dousing fruits and vegetables with a toxic substance have come to an end, many of the nation’s conventional growers are still fighting to keep using chlorpyrifos on food, choosing profits over protecting children and other vulnerable populations.