EWG analysis: Almost all new food chemicals greenlighted by industry, not the FDA 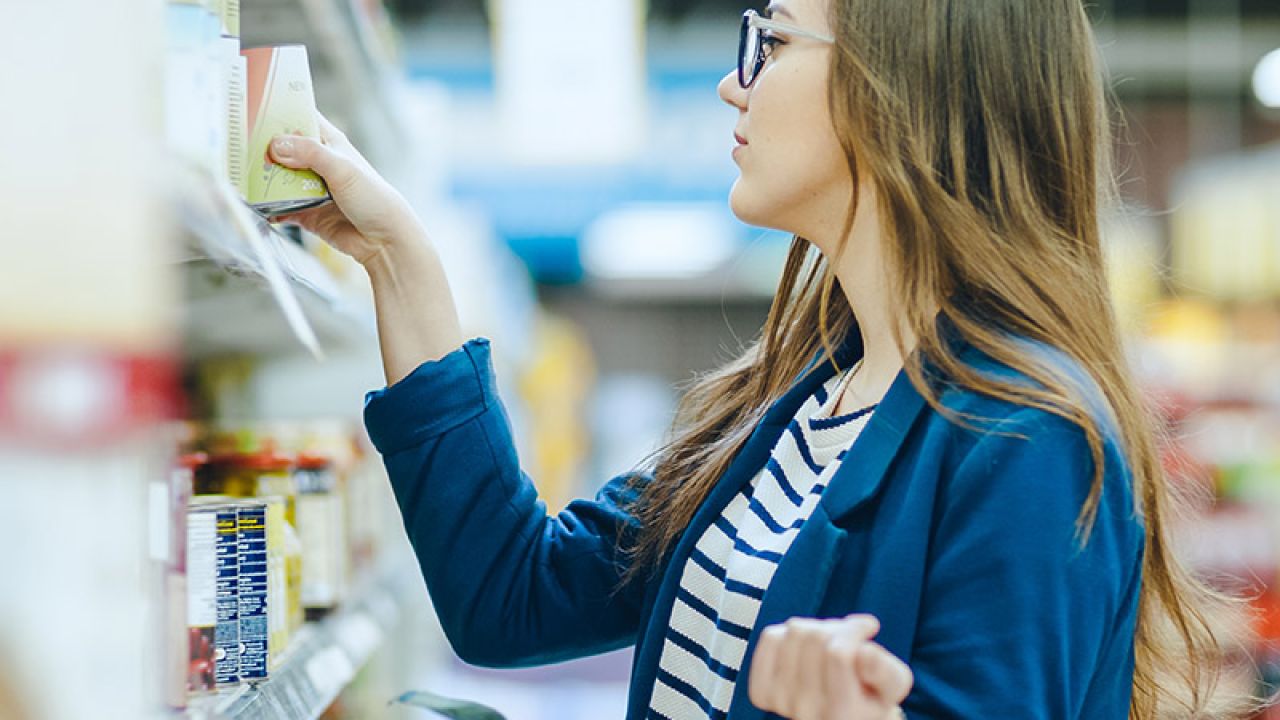 Nearly 99 percent of all food chemicals introduced since 2000 were greenlighted for use by the food and chemical industry, according to a new EWG analysis – not by the Food and Drug Administration, the agency responsible for ensuring food is safe.

That’s because food and chemical companies exploited a loophole in the law allowing them to decide which chemicals are safe to consume, contrary to what Congress intended when it enacted food chemical laws in 1958. What’s more, taking advantage of this loophole is now the way most new chemicals, including EGCG, propyl paraben and theobromine, are allowed in foods.

Since 2000, food and chemical companies have petitioned the FDA only 10 times to approve a new substance. By contrast, for 756 of 766 new food chemicals added to the food supply since then, or 98.7 percent, these companies have exploited a loophole for substances that are “generally recognized as safe,” or GRAS. The loophole lets them – not the FDA – decide a substance is safe. 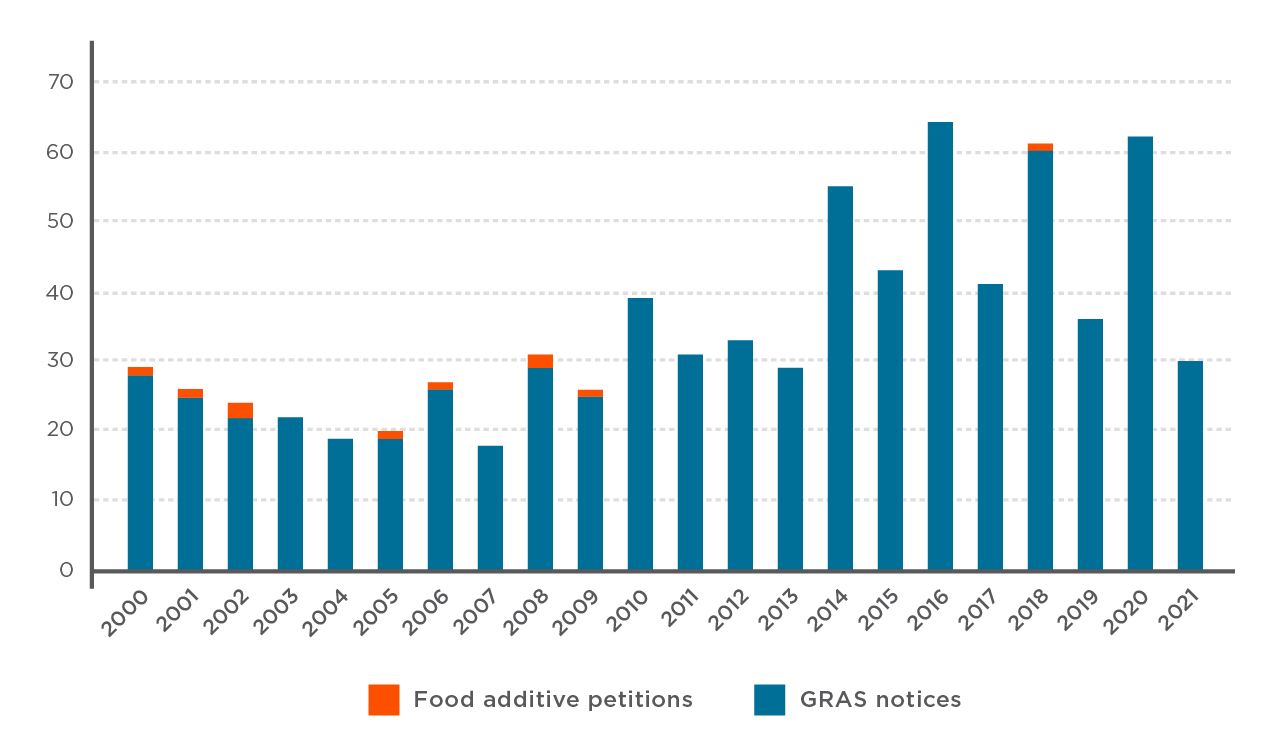 Nine of the 10 food additive petitions for new chemicals were first filed more than 10 years ago, including:

A food additive petition triggers rigorous pre-market safety review of a chemical, which can only be used after FDA approval. The 1958 Food Additives Amendment intended this review to be the primary way new food chemicals are approved.

But just one food additive petition for a new chemical has been filed in the past decade.

For the other 756 new food chemicals added to the food supply since 2000, food chemical companies exploited the GRAS loophole so they could make their own safety determinations.

This GRAS loophole was created in the 1958 law and intended to apply narrowly, to common ingredients like sugar, vinegar and baking soda. But as EWG’s analysis shows, the loophole – not FDA safety review – has become the main way new chemicals are allowed into food.

When a company makes a GRAS determination, which shows the company believes “the substance is generally recognized, among qualified experts, as having been adequately shown to be safe under the conditions of its intended use,” it can submit a notice to the FDA, through a process that is entirely voluntary. The FDA can review these notices and issue a “no questions” letter, but it does not approve GRAS substances or affirm a company’s GRAS determination.

If the FDA does raise questions about a company’s safety conclusions, the company can withdraw its GRAS notice – despite agency reservations – and continue to use the ingredient anyway, without further FDA review. Moreover, concerned citizens do not have the chance to provide public comment on or challenge GRAS determinations.

EWG’s analysis includes only substances that have gone through this voluntary process, because little to no information is available when companies make their own GRAS determinations but do not notify the FDA. So the analysis is certainly an undercount of what is added to food through the GRAS loophole. Experts estimate at least 1,000 substances have been added to the food supply without GRAS notices being submitted to the FDA.

Because of the GRAS loophole, harmful ingredients have made their way into, and continue to enter, the food supply.

For example, the Flavor and Extract Manufacturers Association, or FEMA, a trade group composed of industry insiders, reviews and makes GRAS determinations on nearly all flavor ingredients. Seven carcinogenic flavor ingredients rubber-stamped as GRAS by FEMA were later banned in response to a petition by EWG and other nonprofit groups in 2018.

Other GRAS substances include BHA, classified as “reasonably anticipated to be a human carcinogen” by the National Toxicology Program, and BHT, which may disrupt endocrine function by causing thyroid changes and affecting animal development. Green tea extract EGCG may increase risk of cancer but is classified as GRAS.

For decades, partially hydrogenated oils were considered GRAS – even though they are a major source of trans fat in the diet, which can increase cholesterol and harm the heart. When the FDA revoked GRAS status in a rare action, in 2015, the agency said removing these oils from food “could prevent thousands of heart attacks and deaths each year.”

Many of the GRAS notices lack critical health data. A 2020 review of GRAS notices submitted since 1997 found they were nearly all inadequate. Among almost 900, only one assessed the effect of that chemical in combination with other similar chemicals, even though both manufacturers and the FDA are required to consider cumulative impacts as part of a safety determination.

The FDA is charged with protecting the U.S. food supply but has fallen short. Even Michael Taylor, a former FDA deputy commissioner for food, admitted in 2014 that the FDA “simply do[es] not have the information to vouch for the safety of many of these chemicals.”

It is time to close the GRAS loophole and prevent new chemicals from being added to food through a side door, with no government oversight.

A bill introduced by Rep. Rosa DeLauro (D-Conn.), the Toxic Free Food Act, would require the FDA to narrow the loophole by making the GRAS process more transparent, with public input and robust data requirements.

And the Food Chemical Reassessment Act of 2021, introduced by Rep. Jan Schakowsky (D-Ill.), aims to address inadequacies in food additive rules by requiring the FDA to regularly review and reassess food chemicals, many of which have not been reevaluated in decades.

Congress should act quickly to stop the continued use of unsafe chemicals in our food supply.

To compare uses of the GRAS loophole and petitions, EWG looked at how many of each were filed for new chemicals between 2000 to 2021.

To find out how often the loophole was used, EWG reviewed all filings in the FDA’s GRAS notice inventory since 2000. For new substance notices that were filed, we located and categorized all notices for duplicate substances, based on whether they were:

Our analysis found that between 2000 and 2021, there were 756 original GRAS notices for novel food chemicals. And out of a total of 992 GRAS filings, there were 41 refilings and 195 filings for a new food chemical or varied use of an existing one.

Because submission of a GRAS notice is voluntary, it’s impossible to know exactly how many more chemicals or uses companies have determined to be GRAS that are not included in this analysis.

EWG’s comparison focuses only on differences between GRAS notices and food additive petitions for new chemicals and requests to expand or change uses of existing chemicals added directly to food.