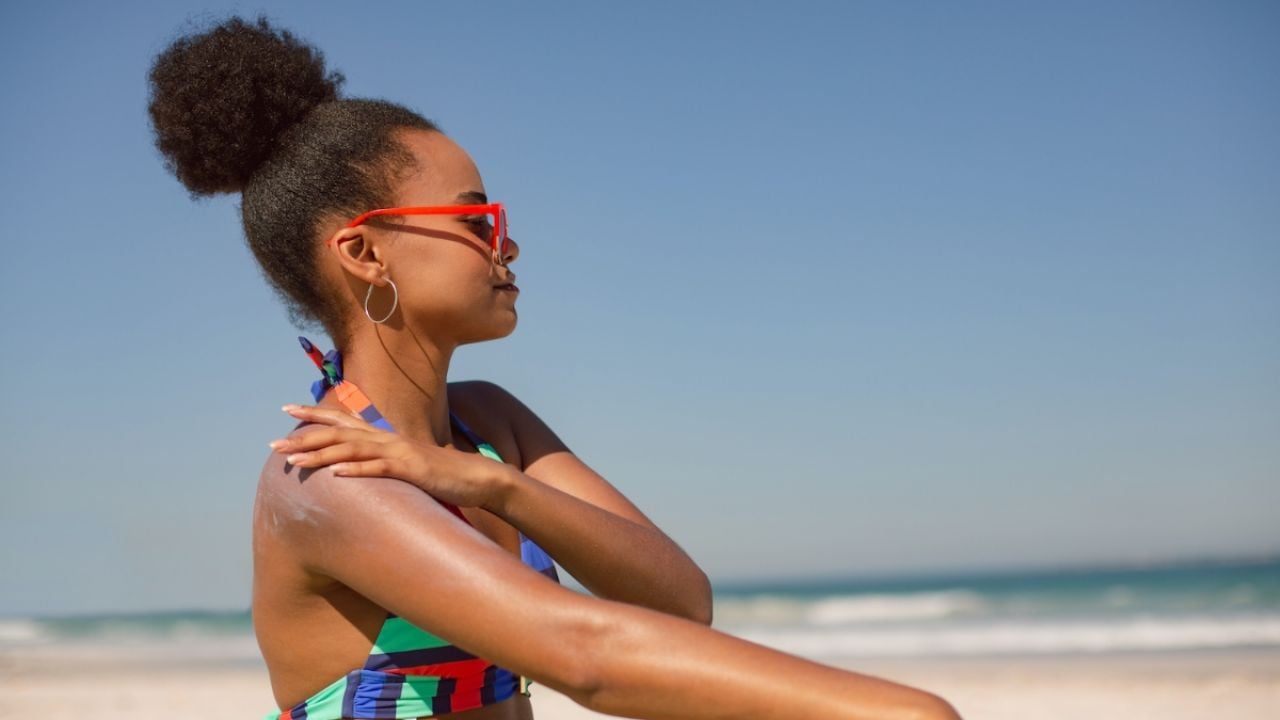 Skin cancer is one of the most common types of cancer worldwide and the most diagnosed cancer in the U.S. Recent research shows that melanin, a pigment found in hair, skin and eyes, can play a critical role in determining both the risk and severity of people who develop melanoma, the third most common type of skin cancer.

Until more research can be done, people should check their skin regularly for new moles and consider taking steps to protect themselves from the sun’s ultraviolet, or UV, rays, especially if they are susceptible to sunburn.

For those with light skin or low melanin levels, BCC, SCC and melanoma frequently occur in sun-exposed areas of the body, which suggests UV exposure may be to blame. But for those with high levels of melanin and darker skin, only BCC is associated with UV radiation exposure.

The usual suggestions directed to people of color about melanoma are misguided. “Current recommendations promoting UV protection for melanoma prevention in skin of color are not supported by most current studies,” according to the authors of a 2020 systematic review of melanoma in the Journal of the American Academy of Dermatology.

But the alarming increase in melanoma cases in recent years, coupled with new research on the role of pigment, suggests the need for a fresh look at whether targeting UV reduction measures for people with all types of pigmentation might help to reduce risks.

Melanoma cases today are six times higher than they were 40 years ago, possibly due to increased UV exposure, as well as some overdiagnosis of the cancer. Melanoma rates reported for Black and Hispanic people by the National Cancer Institute have largely stayed constant.

Want to take EWG’s sunscreen tips wherever you go?

The real risk of skin cancer, regardless of race or ethnicity

Rates of all three skin cancers are drastically different when compared by race. The density of melanin appears to be the strongest predictor of skin cancer risk, with higher levels of skin melanin lending more protection against UV-induced skin damage. And melanin levels vary among individuals of all races and ethnicities, creating a wide range of potential risks.

Although research on the interactions between melanin and UV radiation can be understood apart from race, the data on skin cancer is often based on self-reported racial or ethnic identities or both. This makes it difficult to separate skin color, or melanin density, from race when discussing melanin, skin cancer and risk reduction options.

Because higher melanin density is associated with a lower risk of skin cancer development, skin cancer may be perceived as a non-issue by people with darker skin tones.

However, skin cancer in Black people, particularly melanoma, is associated with higher risks of illness and death, as well as delayed treatment.

A December 2006 study published in Pigment Cell Research examined increasing levels of sun exposure to skin with varying melanin densities. It found that DNA damage was absent in the basal cell layer – the suspected origin of skin cancer – of melanin-dense skin, even when sunburn developed. Conversely, damage occurred across all layers of less melanin-dense skin.

Although melanin offers some protection against the damage caused by UV radiation, it does not completely protect from skin cancers, which can have different outcomes, rates of occurrence and symptoms among people with greater melanin density.

Discrepancies in types and severity of skin cancers

Black patients have greater odds of a delay between diagnosis and surgery, according to a study last year of racial demographics and the time from cancer diagnosis to surgery for removal of cancerous cells.

The study, published in the Journal of the American Academy of Dermatology, found that Black people were five times more likely to have surgery 90 days or more after a diagnosis, compared to white patients. Black patients received immunotherapy for advanced, or stage 4, melanoma 21.5 days later than white patients, on average.

In some cases, the discrepancies in outcomes for white skin cancer patients and Black patients can be explained by socioeconomic factors that may hinder diagnosis and treatment. But more research is needed to determine the reasons for the discrepancies.

In a study of nearly 150,000 people with diagnosed BCC in California from 1998 to 2012, rates of BCC per 100,000 people ranged from 1,035 in white people to nine in Black people. The distribution on the body of basal cell carcinomas is similar across all races, appearing largely in the head and neck region, though tumors in people of color are pigmented in 50 percent of cases, compared to only 5 percent in white people.

Squamous cell carcinoma is the most common skin cancer among Black people; it is the second most common skin cancer in white, Asian and Hispanic people. People of color are more likely to develop this type of skin cancer in areas not frequently exposed to the sun, whereas white people tend to develop it in chronically sun-exposed areas. This may be because SCC in people of color is strongly associated with scarring not restricted to areas of sun exposure.

Chronic scarring and inflammatory diseases are the greatest predisposing factors for SCC in Black people, accounting for 20 to 24 percent of cases. SCC in areas of scarring have also been reported in Asian people. Reported occurrences of both SCC and BCC have been rising in Asian populations, but the strength of this finding can’t be assessed, because of limited data. 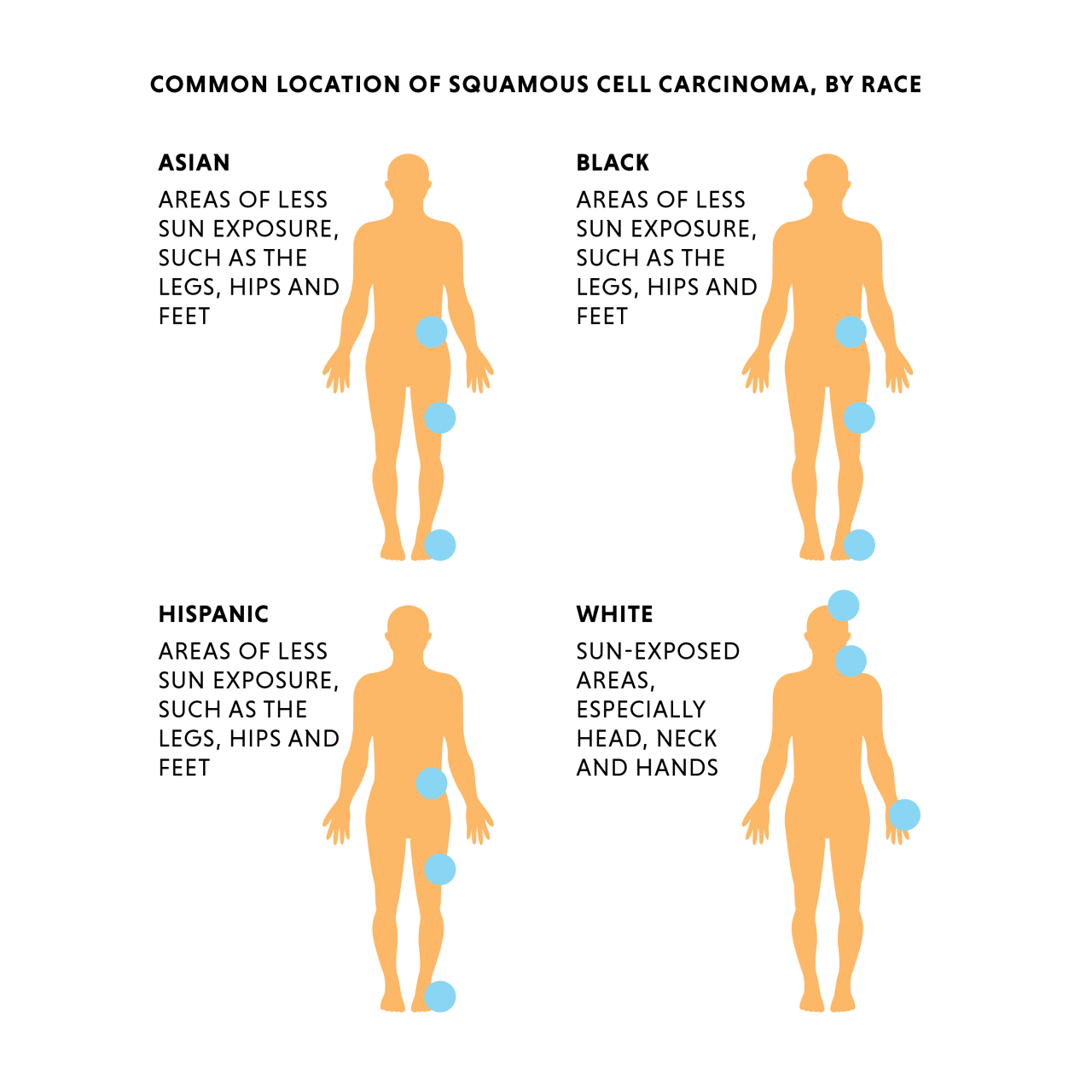 Melanoma is the third most common form of skin cancer in all racial groups, but it’s also the deadliest, with increased incidence and death rates in white people and males. National Cancer Institute data between 1975 and 2018 show a steady increase in incidence but not mortality for white people, from 8.7 cases per 100,000 to 32.6. NCI also found the incidence for Black people have remained approximately 1 per 100,000 throughout the same period.

The clinical appearance of melanoma varies in people of color. It is most common on the palms, soles and mucosal membranes of Asian and Black people and on sun-exposed areas of Hispanic people. It may also appear as a pigmented band on the nail. In white people, melanoma is often detected on sun-exposed areas, such as the head and neck. 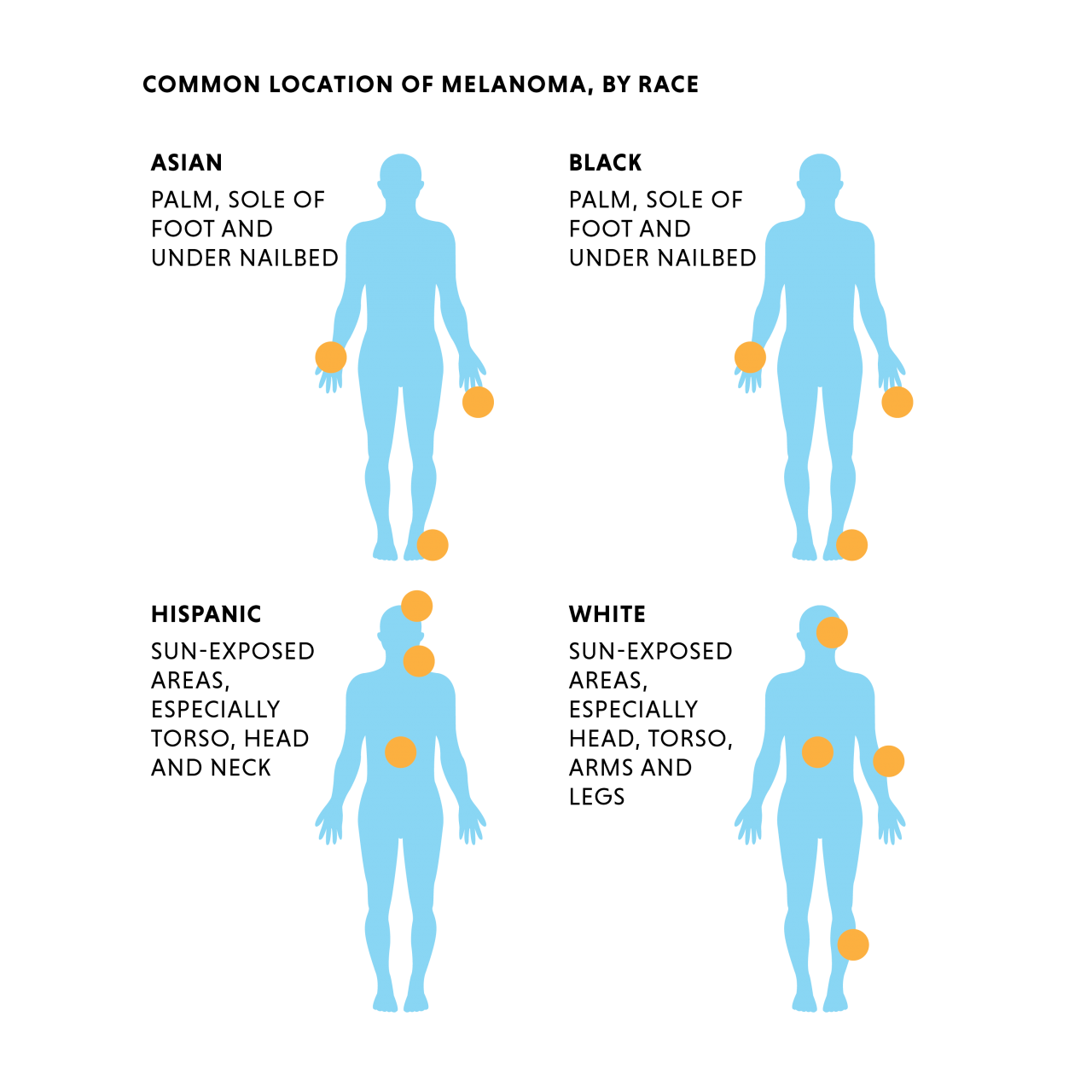 Although people with greater density of melanin may have more natural protection from UV damage than people with lighter skin, they still face a risk of skin cancer. Dermatologists maintain that sun protection is key to mitigating risk across all populations.

More research is needed to identify the exact level of sun protection to recommend for people with a greater density of melanin. The problem is balancing the right amount of UV protection with the need for vitamin D synthesis – our necessary exposure to sunshine for a healthy life – and the potential toxicity of certain sunscreen ingredients that claim to block UV rays.

As EWG continues to research this topic, we recommend avoiding sunburn – a clear marker of too much UV exposure – and following our sun safety tips, which include covering up, seeking shade and choosing a sunscreen, when necessary.