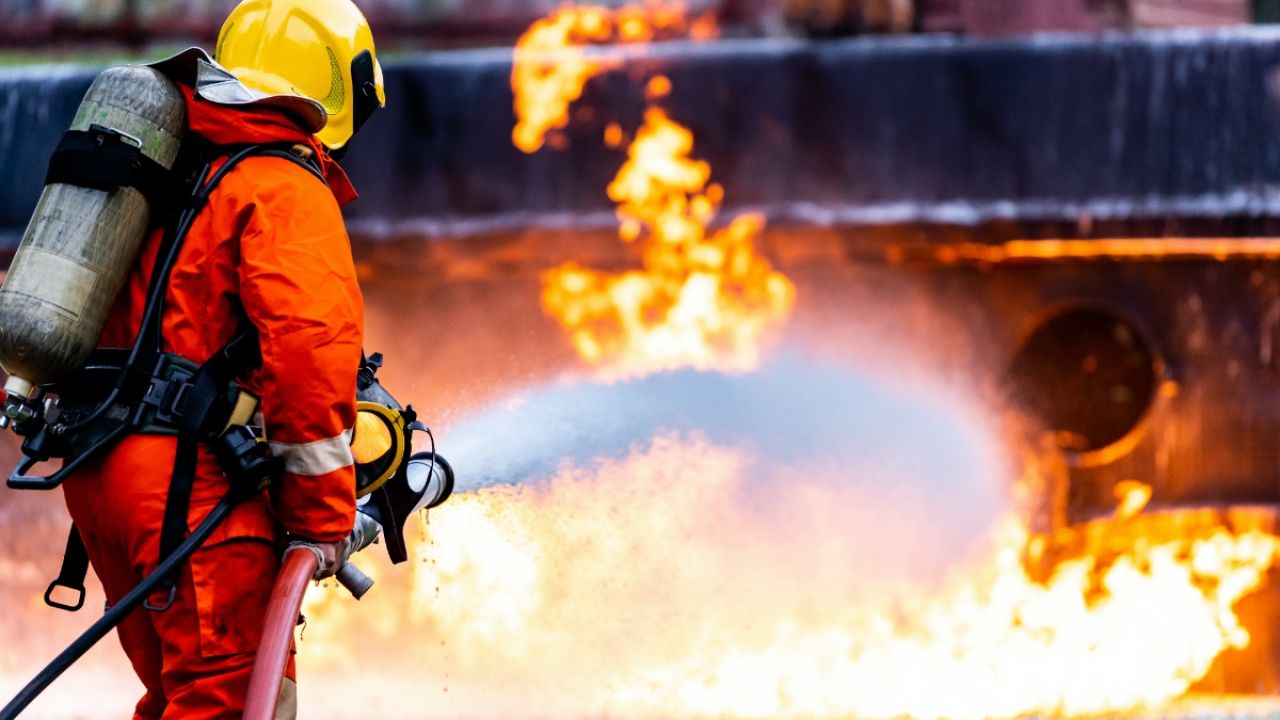 Firefighters are among those most highly exposed to harms from the toxic “forever chemicals” known as PFAS through their protective gear and firefighting foam, but many local fire departments lack the resources to switch to PFAS-free alternatives.

That’s why Congress should use the pending fiscal year 2022 budget reconciliation to provide federal funds for local fire departments to quickly fund the shift to safer firefighting foams and turnout gear, vital support to help protect firefighters across the country.

Studies show that firefighters have higher levels of PFAS in their blood serum than the average American. PFAS are linked to various health effects, including some kinds of cancer, reproductive harms, and reduced effectiveness of vaccines.

The exposures happen through the use of firefighting foam containing PFAS, which is called aqueous film-forming foam, or AFFF, and protective clothing treated with PFAS.

3M and the military developed AFFF in the 1960s. Even though PFAS manufacturers and the Department of Defense have known for almost 50 years that PFAS are toxic and that AFFF could significantly contaminate sources of drinking water, they failed to notify the Environmental Protection Agency or the public. As a result, firefighters handled the foam for decades without understanding the risks or taking precautions to limit exposures.

Firefighter turnout gear is also made with PFAS textile materials and treated with additional PFAS for water resistance, posing further risks to firefighters wearing it.

Graham Peaslee, professor of physics at the University of Notre Dame, tested several pieces of used turnout gear and found that they were “the most highly fluorinated textiles” he had ever seen. Over time, the fabrics in turnout gear can degrade and release PFAS. These PFAS can be absorbed through contact with the skin, ingested if PFAS is on the hands after handling gear, or inhaled when it contaminates dust.

A 2021 study found several kinds of PFAS in the dust from 15 Massachusetts fire stations, an example of the problem facing firefighting departments across the U.S.

The good news is that firefighters don’t have to use these harmful items because alternatives that are free from PFAS are either available or in rapid development.

Viable alternatives to AFFF are already on the market, many of which meet rigorous international aviation performance standards used by airports all over the world. As of April 2019, there were 90 fluorine-free foams available from 22 manufacturers.

There are also promising emerging alternatives to PFAS in turnout gear and other personal protective equipment. Manufacturer Fire-Dex recently released new PFAS-free gear with a more sustainable water-repellant finish. Some fire departments, like the one in Nantucket, Mass., have already switched the outer layer of their gear to be PFAS-free. Several states, including California, Colorado and New York, require manufacturers of firefighter protective equipment to disclose inclusion of PFAS in their products.

Although these alternatives exist, local fire departments may not have the resources to quickly replace firefighting foam and gear, which can be a costly effort.

That’s why this month, Reps. Jim McGovern (D-Mass.) and Dan Kildee (D-Mich.) led the effort to send a letter, along with nearly 70 other members of Congress, urging the House Committee on Science, Space, and Technology to include federal funds in vital budget reconciliation language to help local fire departments replace firefighting foam and gear.

Congress should protect firefighters by adopting this language and supporting local fire departments that wish to transition to safer firefighting foams and turnout gear.