WASHINGTON – A coalition of public interest, environmental and economic justice organizations is demanding that Duke Energy, which has more customers than any other investor-owned electric utility, reverse years of company practices that have punished its low-income ratepayers and communities of color.

The Duke Energy Accountability Coalition published a full-page ad in the April 11 edition of the Charlotte Observer, Duke’s hometown newspaper, calling on the utility to take concrete steps to expand access to affordable clean energy options such as solar energy and efficiency, to clean up coal ash contamination in fenceline communities and to restore power to all customers who have had their electricity cut off during the coronavirus pandemic. 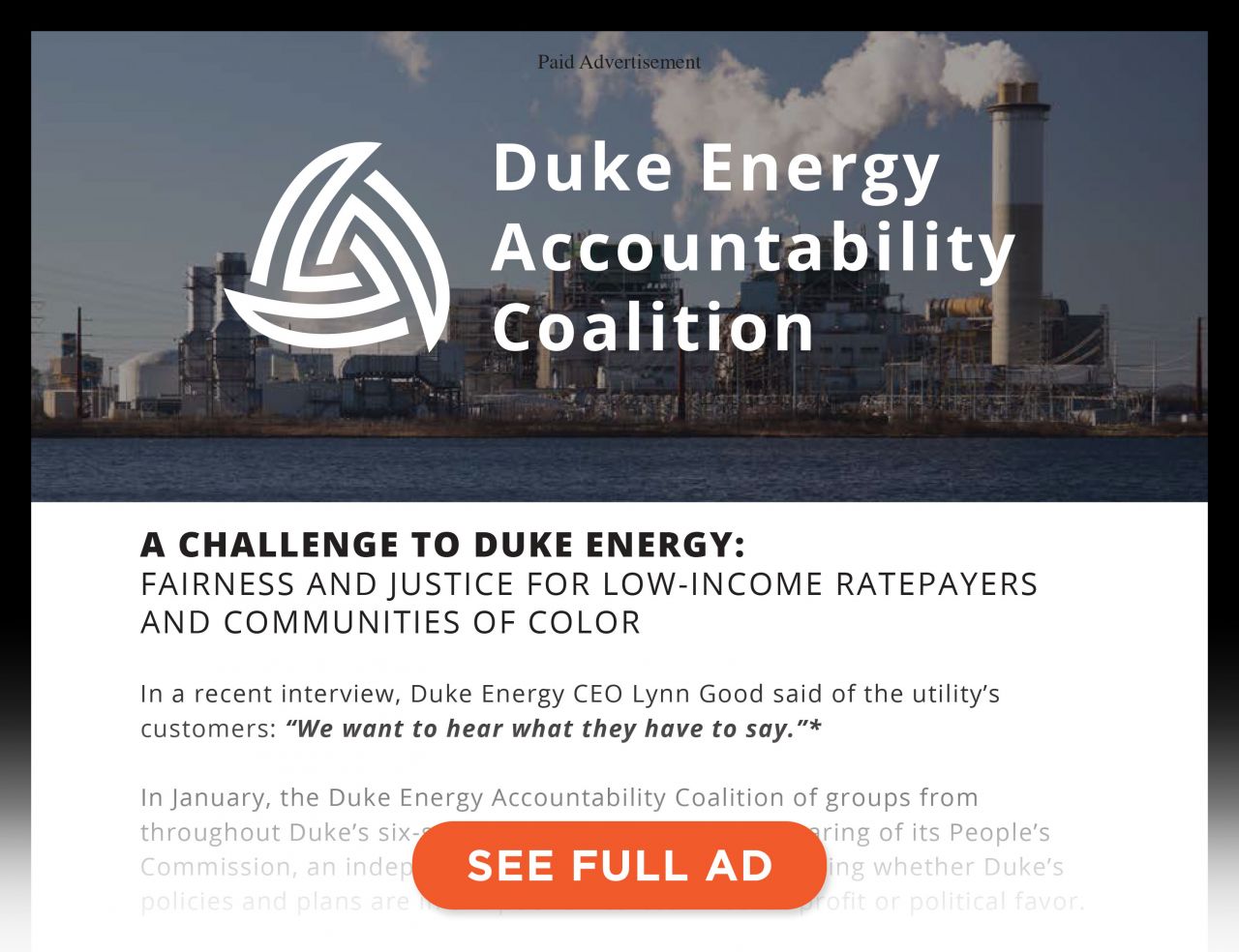 The list of actions prescribed in the ad comes from an order issued by the Duke Energy Accountability Coalition’s People’s Commission, which held a public hearing on January 29.

Members of the commission heard testimony from several environmental and social justice advocates who have worked for years to hold Duke Energy accountable for the environmental and economic harm it has inflicted on underserved communities in North Carolina and throughout its six-state service area.

“The coalition will continue to hold Duke accountable for its misdeeds, which have caused enormous harm, both economic and environmental, to underserved communities throughout its service area,” said EWG President Ken Cook, whose organization is a founding member of the coalition. “Duke and its executives may not appreciate the added scrutiny of their activities, which have adversely impacted its low-income ratepayers, but that won’t stop the coalition from continuing its work to raise these and other issues where Duke has failed to act in the interest of its customers and the environment.”

Duke’s deplorable record on environmental and social justice has long been a focus of local and state advocates. But with the creation of the Duke Energy Accountability Coalition and its People’s Commission, it is the first time organizations have come together to shine a light on the utility’s anti-environment-and-equity policies and practices throughout its service area.

The People’s Commission will hold its next hearing in the coming weeks, focusing on Duke’s ongoing efforts to ignore the climate emergency by stifling its own transition to renewable energy and instead clinging to outdated, dirty and dangerous power generation from coal, natural gas and nuclear energy.

Information for the next hearing by the People’s Commission will be posted here when details, including the day, time and list of witnesses have been finalized.

Members of the coalition include: