Wasted Food is a Major Source of Emissions

EWG’s analysis found that discarded food accounts at least 20 percent on average of the emissions associated with producing, processing, transporting and consuming meat and dairy products. Reducing waste and buying only as much as you can eat is the easiest way to reduce greenhouse gas and other environmental impacts of food.

Most of the emissions attributed to waste come from producing food that is ultimately discarded – from fertilizer and pesticide production, growing feed, transportation, etc. Foods with higher waste rates such as farmed salmon (44 percent is thrown away by retailers and consumers) have much higher emissions during production since it takes a lot more salmon to produce the amount that is actually consumed. Some of the waste-related production emissions are unavoidable, such as moisture and fat loss during cooking. These must be accounted for in the lifecycle analysis, but there is very little consumers can do to minimize these losses. (See Figure 5.) 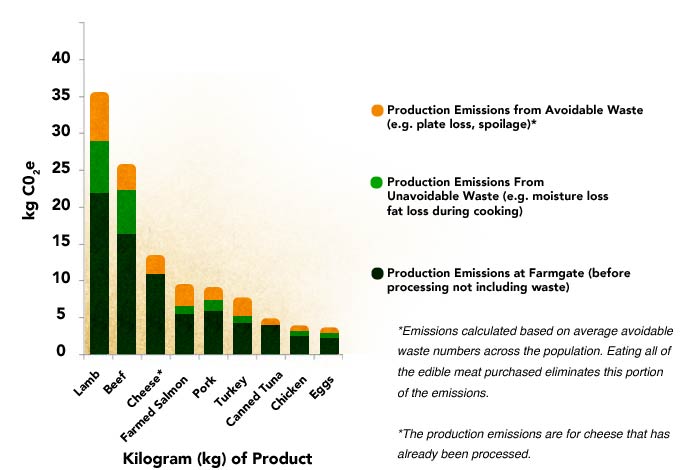 Composting meat (at home or through a service) reduces emissions by only small amounts: less than 0.01 percent for most meats. It has a bigger impact for vegetables: 10 percent in the case of broccoli and tomatoes.

Although transportation-related emissions don’t vary much among different kinds of food, transportation accounts for a much higher fraction of the overall footprint of vegetable proteins because they have much lower emissions overall. According to this analysis, buying locally can significantly reduce the climate impact of vegetable production (10-30 percent), but has a relatively smaller impact for meat (1-3 percent). Nevertheless, supporting local ranchers is important for other reasons.

Emissions from meat processing, including freezing and packaging, vary considerably.

Processing accounts for just 5 percent of lamb and beef’s overall carbon footprint, compared to 12 percent of pork’s and 24 percent of chicken’s.

Electricity to run the plants and pump huge quantities of wastewater is the main source of greenhouse gases from slaughterhouses. Emissions from chicken processing are relatively higher because it requires a high volume of water, and overall production emissions are lower.