Across wide swaths of Iowa and other Corn Belt states, the rich, dark soil that made this region the nation’s breadbasket is being swept away at rates many times higher than official estimates.

That is the disturbing picture revealed by scientists tracking soil erosion in Iowa after every storm that hits the state and producing an unprecedented degree of precision in soil erosion estimates. The Environmental Working Group corroborated the scientists’ findings with aerial surveys that produced striking visual evidence of the damage.

In April 2010, USDA’s Natural Resources Conservation Service (NRCS) released data estimating the rate of soil erosion on agricultural land in the United States. On the surface, the data from the 2007 National Resources Inventory (NRI) were reassuring. Erosion in Iowa averaged 5.2 tons per acre per year, only slightly higher than the allegedly “sustainable” rate of five tons per acre per year for most Iowa soils — the amount that can supposedly be lost each year without reducing agricultural productivity. Across the entire Corn Belt, erosion averaged only 3.9 tons per acre per year, according to the NRCS data.

There is compelling evidence, however, that soil erosion and runoff from cropland is far worse than these estimates suggest. Indeed, it appears that the nation is losing ground in the decades-old fight to gain control over this most fundamental and damaging environmental problem in agriculture.

In some places in Iowa, recent storms have triggered soil losses that were 12 times greater than the federal government’s average for the state, stripping up to 64 tons of soil per acre from the land, according to researchers using the new techniques. In contrast to the reassuring statewide averages, the researchers’ data indicate that farmland in 440 Iowa townships encompassing more than 10 million acres eroded faster in 2007 than the “sustainable” rate. In 220 townships totaling 6 million acres, the rate of soil loss was twice the “sustainable” level.

Six million acres eroded at twice the “sustainable” rate in 2007. 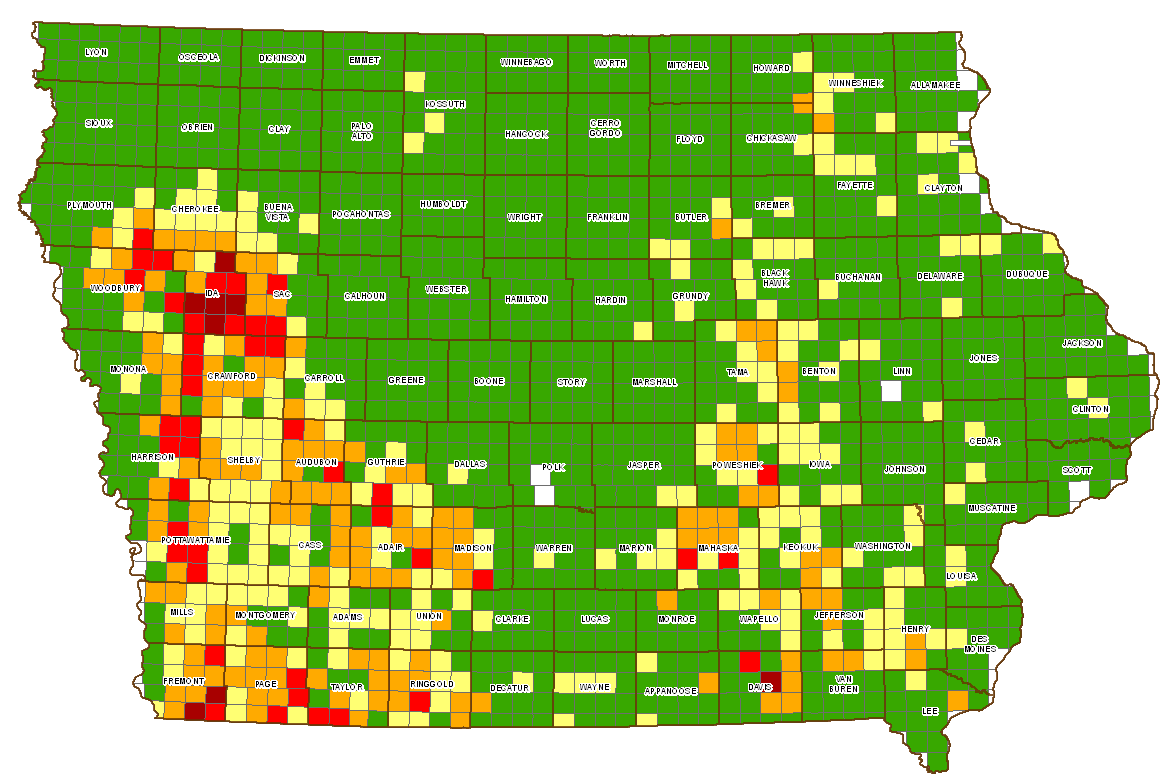 The aerial survey conducted by EWG in the spring of 2010 indicated that soil erosion and runoff are likely far worse than even the ISU numbers suggest, because researchers’ current models do not account for the effect of widespread “ephemeral gullies.” During heavy rains, these gullies reappear rapidly where farmers have tilled and planted over natural depressions in the land and form “pipelines” that swiftly carry away the water the earth cannot absorb.

The ISU data and EWG’s survey reinforce long-standing doubts about the very system used to describe the so-called “sustainable” level of erosion — how much soil loss the land can tolerate before it loses its ability to sustain a healthy crop. These “T values” are gauzy estimates at best, and there is substantial and growing evidence that they greatly overstate the ability of cropland to remain fertile in the face of the ravages of soil erosion and water runoff, especially at a time when a warming climate is producing ever more frequent severe storms. For lack of a better alternative, however, this report’s discussion does use T values as a point of reference.

The runoff from vulnerable farmland not only washes away soil – the fertile legacy of thousands of years of geological processes — but also carries with it a potent cargo of fertilizers, pesticides and manure that flows into local creeks and streams and eventually into the Mississippi River. Ultimately it ends up in the Gulf of Mexico, generating the notorious dead zone — a zone of depleted oxygen that suffocates marine life when it forms each year.