Between 2007 and 2017, tests detected elevated levels of nitrate (3 milligrams per liter, or mg/L) in the tap water supplies of 219 towns and cities in Oklahoma, serving approximately 438,000 people. For the other nine states in this analysis, EWG had data between 2003 and 2017, but we only received data for the years between 2007 and 2017 from our Oklahoma public records request.

Contamination is getting worse in 110 of those community water systems1 – 50 percent, serving approximately 235,000 people. Larger towns and cities tend to depend on surface water for drinking, whereas smaller, often rural communities depend on groundwater. Oklahoma relies on groundwater more than many states do. Close to 52,000 residents of 11 towns and cities that rely on surface water faced increased contamination. But 99 communities, serving approximately 183,000 people, that depend on groundwater saw nitrate contamination increase.

Oklahoma Communities With Increases in Nitrate Contamination, 2007 to 2017

Average Nitrate Levels in Oklahoma Communities Where Contamination Rose, 2007 to 2017 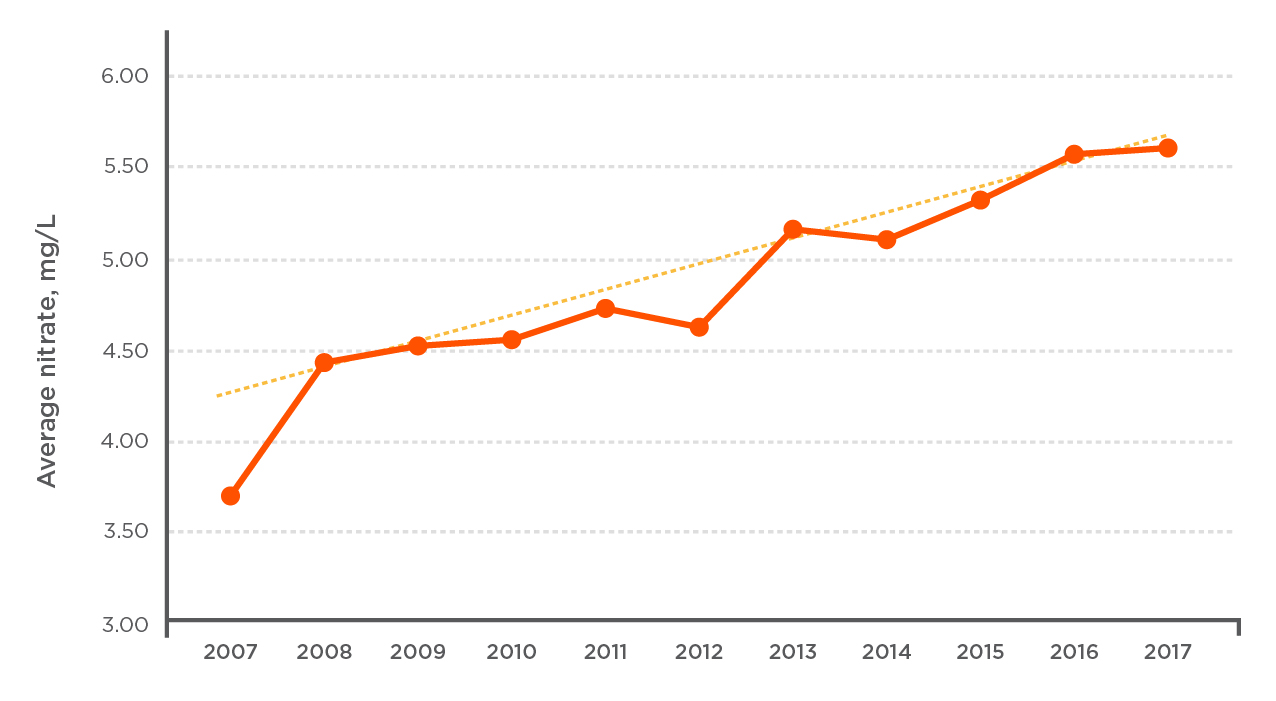 But more recent studies show strong evidence of an increased risk of colorectal cancer, thyroid disease and neural tube birth defects at levels at 5 mg/L or even lower. During the period analyzed, drinking water got worse in 71 Oklahoma communities, serving approximately 162,000 people, that already had tested at or above 5 mg/L at least once.

People who want to know the level of nitrate in their community’s water system can visit the Oklahoma page of EWG’s Tap Water Database.

Contamination was more likely to get worse in smaller communities between 2007 and 2017. Ninety-one percent of systems with worsening nitrate contamination served 3,300 people or fewer. For our analysis, systems were put into the EPA-designated size categories based on how many water customers they serve.


Number and Percent of Systems With Increasing Nitrate Levels, by System Size, 2007 to 2017

Nitrate contamination was also more likely to get worse for people living in rural areas. In Oklahoma, 79 percent of communities with growing nitrate levels were rural, whereas 21 percent were urban, as defined by the U.S. Census Bureau.