In the past eight years, three predominantly Black, Native American and Latino counties in North Carolina – already home to most of the state’s industrial hog operations – added 30 million chickens and turkeys, according to a new geospatial analysis by the Environmental Working Group and Waterkeeper Alliance.

The Environmental Working Group and Waterkeeper Alliance estimate that in that same period, the number of poultry increased by 17 percent in the rest of the state, excluding those three counties. In total, the number of poultry in North Carolina, including those three counties, increased by more than 90 million birds, to a total of more than 538 million. Housed in over 4,800 operations, these chickens and turkeys have the potential to produce five million tons of waste a year.

That’s in addition to 8.7 million hogs generating 9.2 billion gallons of liquified waste and sludge a year. A 1997 state moratorium on new and expanded swine farms was made permanent in 2007 for farms that use so-called anaerobic waste lagoons – often-unlined pits of liquid manure and urine – as primary waste treatment.

Under current statute, any new or expanding swine farm must eliminate discharge into nearby waterways, and substantially reduce soil and groundwater pollution, ammonia emissions, odor and pathogens. But no such restrictions have been placed on poultry operations.

This interactive map, updated since originally published in December 2016, shows the approximate location of every industrial swine, cattle and poultry feeding operation in North Carolina. Clicking on a location brings up details, including the number of animals and the estimated amount of waste each facility could generate in a year. 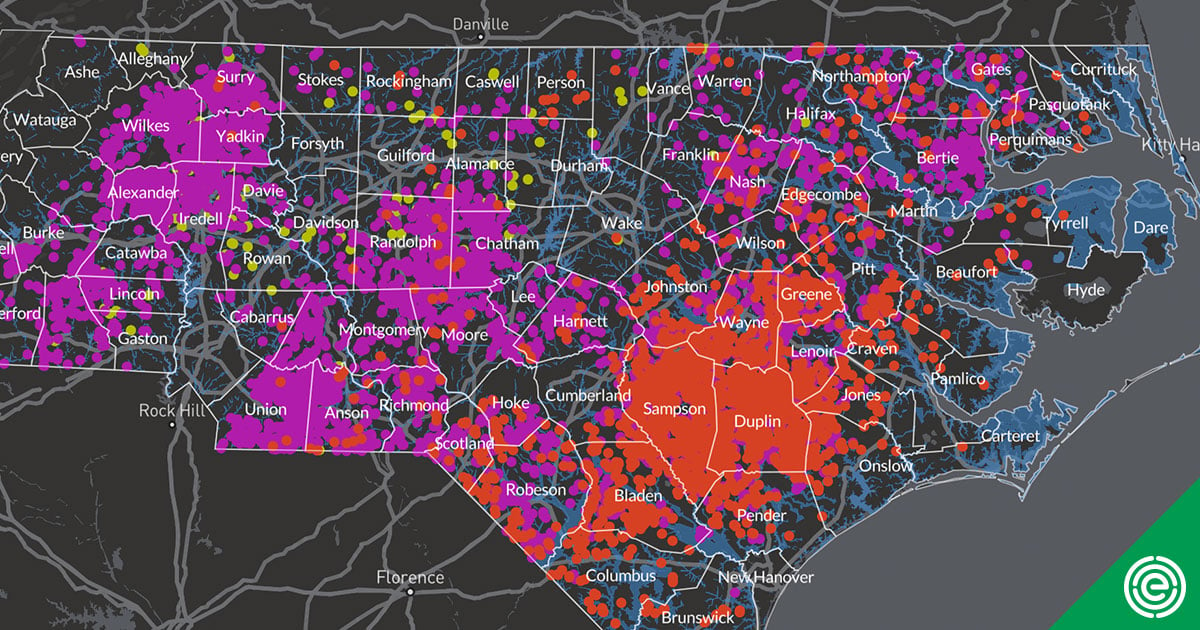 This graphic compares the percentage growth of poultry since 2012 in Duplin, Sampson and Robeson counties to that in the rest of the state. 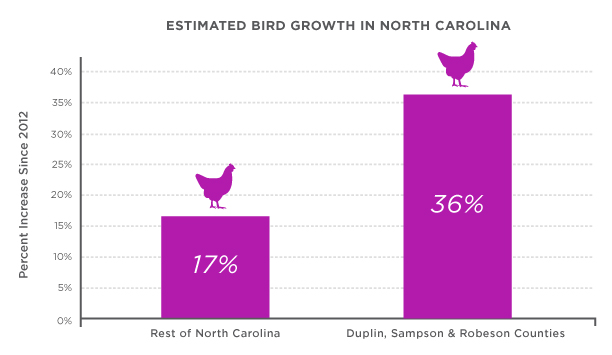 In the 2010 U.S. census, 57 percent of residents of the three counties identified as Black, American Indian or Alaska Native, or one of several other non-white categories2 – almost twice the state average.

The growing population of chickens and turkeys in the three counties could produce one million tons of waste each year – almost one-fifth of all estimated poultry waste statewide. That is 4,500 times the weight of the Statue of Liberty. 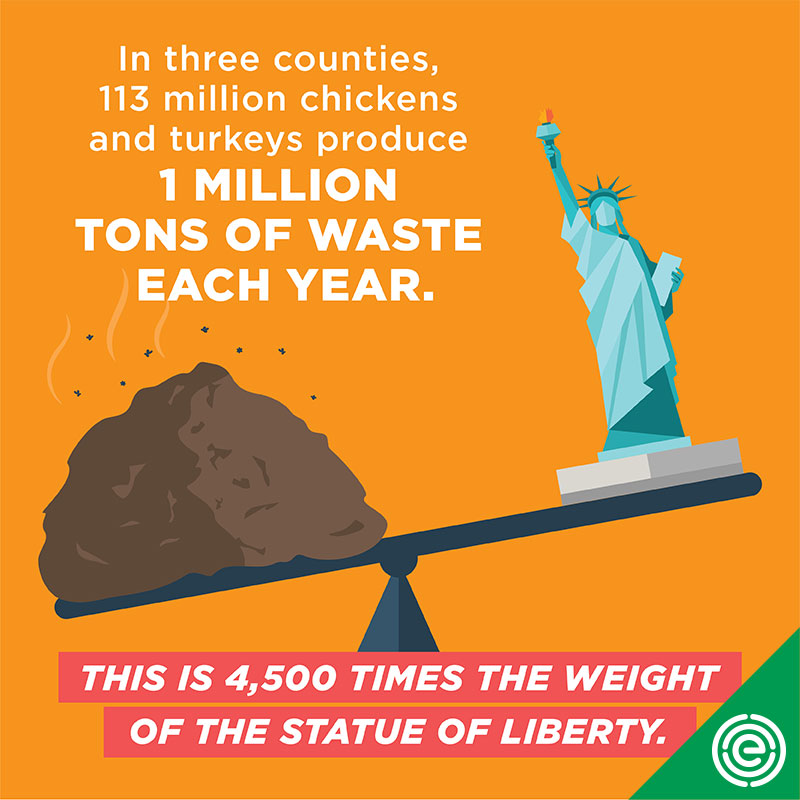 People in the three counties have long had to live with enormous quantities of animal waste and its stench, the threat to their water and the impacts on their health.

The counties are home to 4.5 million hogs – more than half the state’s total. Raised in confinement – in facilities often referred to as concentrated animal feeding operations, or CAFOs – hogs in the three counties generate 4.4 billion gallons of liquified waste each year, enough combined urine and manure to fill 6,715 Olympic-sized swimming pools.

The risks of living near North Carolina’s swine operations are disproportionately borne by Black, Native American and Latino people, something state officials have known for years.

In 2017, a U.S. Environmental Protection Agency review of a civil rights suit alleging discriminatory impacts of state permitting of hog operations found a “linear relationship between race/ethnicity [of residents within 3 miles of industrial hog operations] and...density of hogs.” The EPA expressed “deep concern about the possibility that African Americans, Latinos and Native Americans have been subjected to discrimination” as a result of how the state permitted hog operations. The suit was settled in 2018, with the state agreeing to stipulations that included a program of air and water monitoring near hog operations.

State law has held the number of hog operations relatively stable. Meanwhile, the state allowed the poultry industry to add one operation after another, with almost no regulatory oversight, in the same predominantly Black, Native American and Latino counties that were already most affected by hog operations.

None of North Carolina’s hog or poultry waste is treated. Waste from chickens and turkeys can legally be stored in uncovered piles for up to 15 days at a time. When it rains, waste from these piles can wash into nearby waterways. The waste is then trucked to cropland, where it is spread. The state does not require poultry operations to submit waste management plans, and environmental regulators are often unaware of where, when or how much waste is applied on fields.

Compared to poultry CAFOs, hog operations are better regulated. Swine CAFOs must have a state-issued permit to operate, but hog waste is stored in open, often unlined pits dug into the porous soil of Duplin, Sampson and Robeson counties, as well as neighboring counties in the state’s coastal plain that are vulnerable to hurricanes. An analysis by researchers from the University of Arizona and The Nature Conservancy of flooding from hurricanes Matthew and Florence found that 91 swine CAFOs and 36 poultry CAFOs were overcome by flood waters.

A 2018 Duke University study found that North Carolinians who live in areas dense with industrial swine operations have a higher rate of mortality from anemia; kidney disease; bacterial infection, or sepsis; and tuberculosis, as well as a higher rate of death and infant mortality, compared to other residents in the state. An earlier study reported that children in North Carolina who go to school near livestock operations have more wheezing and asthma.

A 2017 EWG geospatial analysis estimated that 160,000 North Carolina residents – including more than 24,000 residents of Duplin, Sampson and Robeson counties – lived within half a mile of a swine or poultry CAFO. 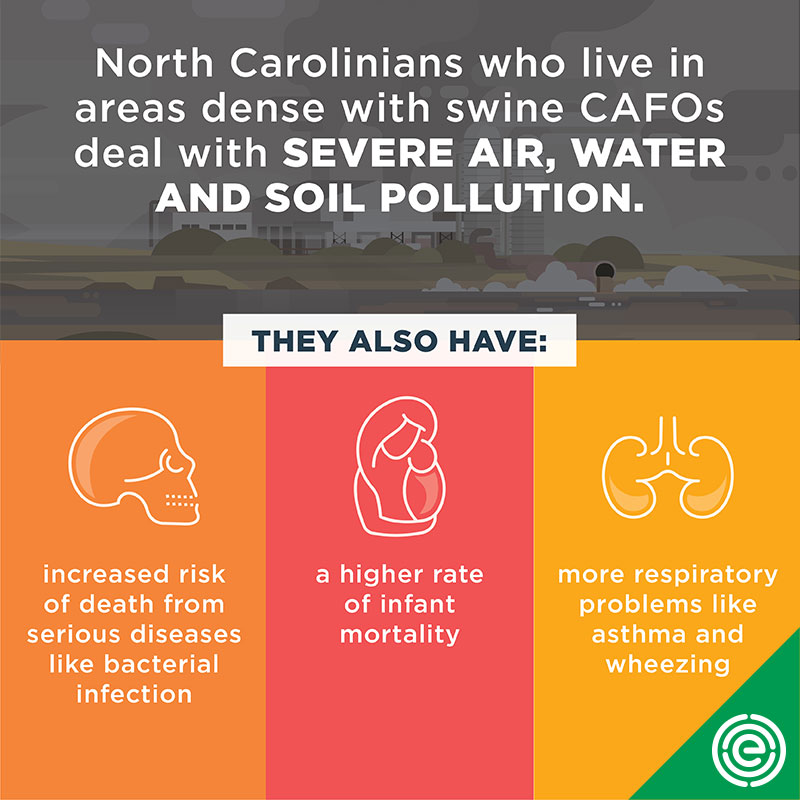 In practice, North Carolina requires little more than a building permit to open poultry operations housing up to 50,000 chickens or turkeys. Oversight of operations is almost non-existent, as EWG exposed in 2018. Most of the state’s poultry are raised in barns housing at least 35,000 tightly packed chickens. Some new operations have as many as 48 barns, housing up to 1.4 million birds in total at a time.

The disproportionate racial impact of the state’s regulatory abdication becomes even starker when counties are broken down into smaller census blocks, the smallest unit the census uses to sort demographic information.

For instance, since 2012, one 2.4-square-mile census block in Sampson County has seen three new industrial poultry operations built, which together can house more than 260,000 chickens in 12 barns. Of the 33 residents living within the census block, 85 percent are Black, and 97 percent are Black, Native American or other people of color.

EWG and Waterkeeper Alliance analysis found that, since 2012: 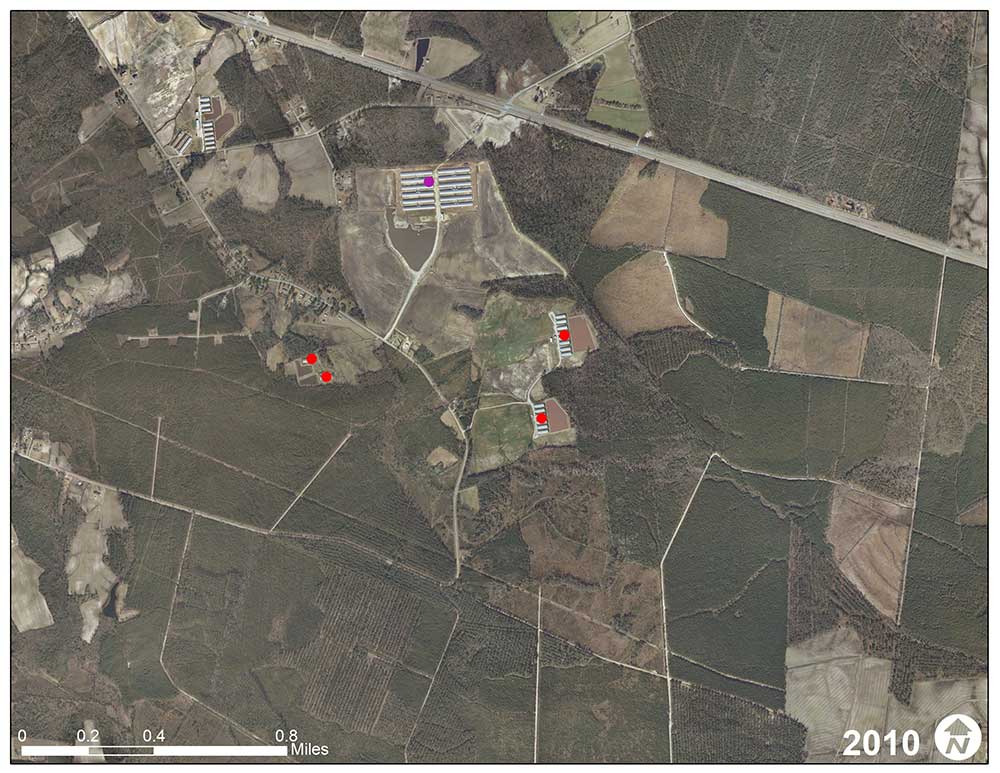 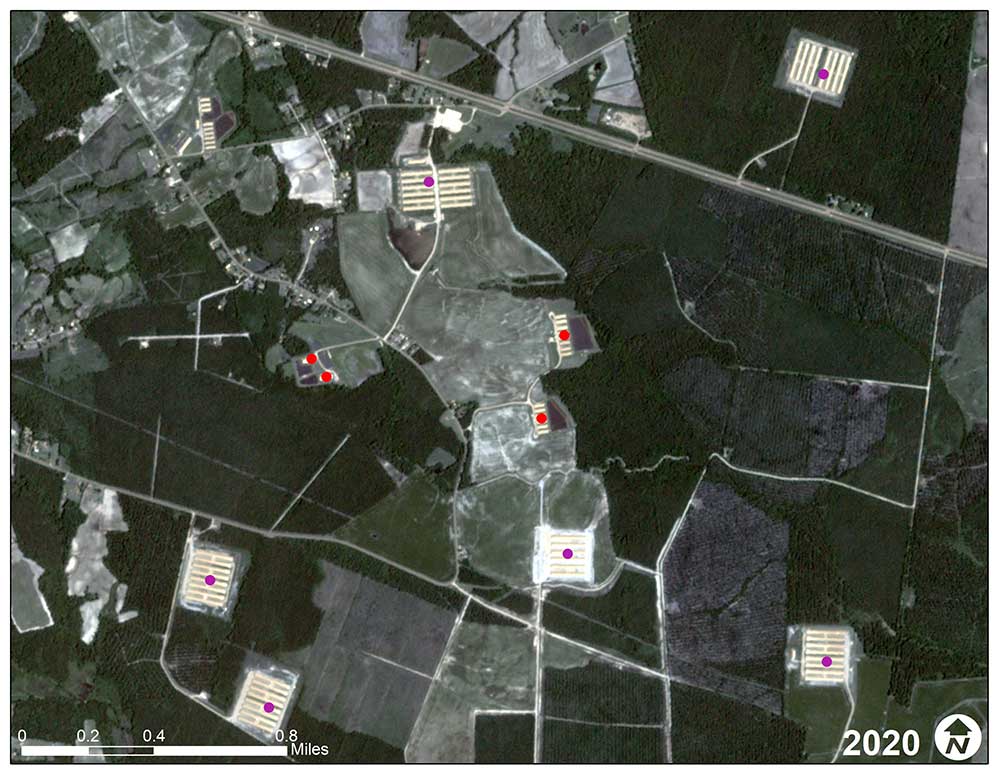 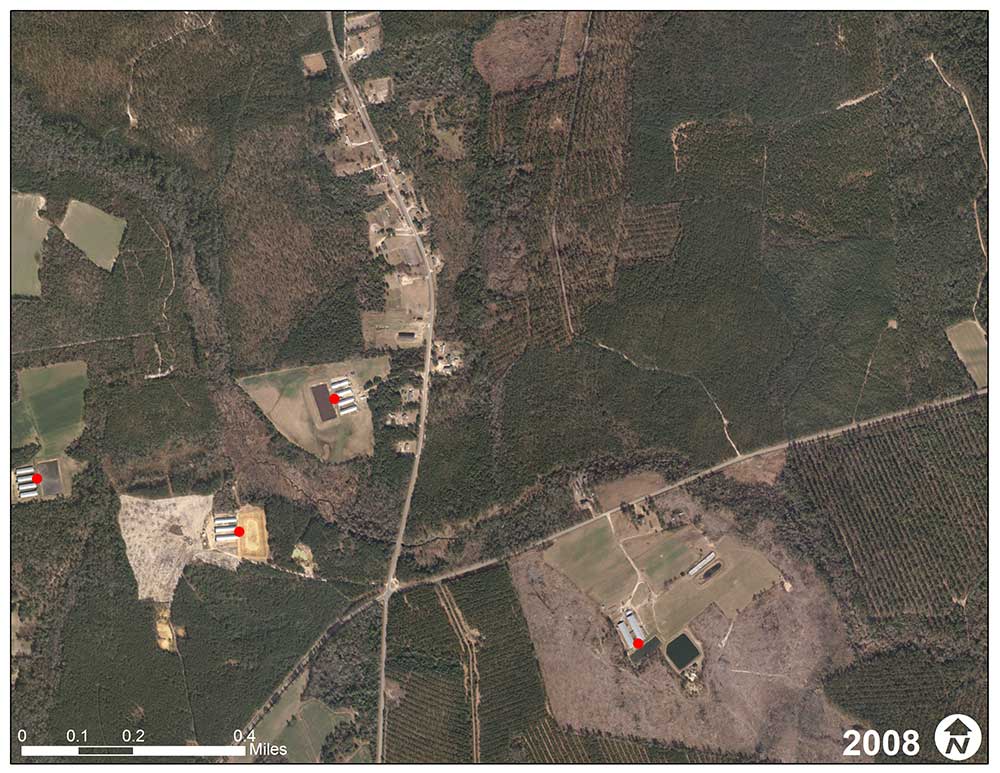 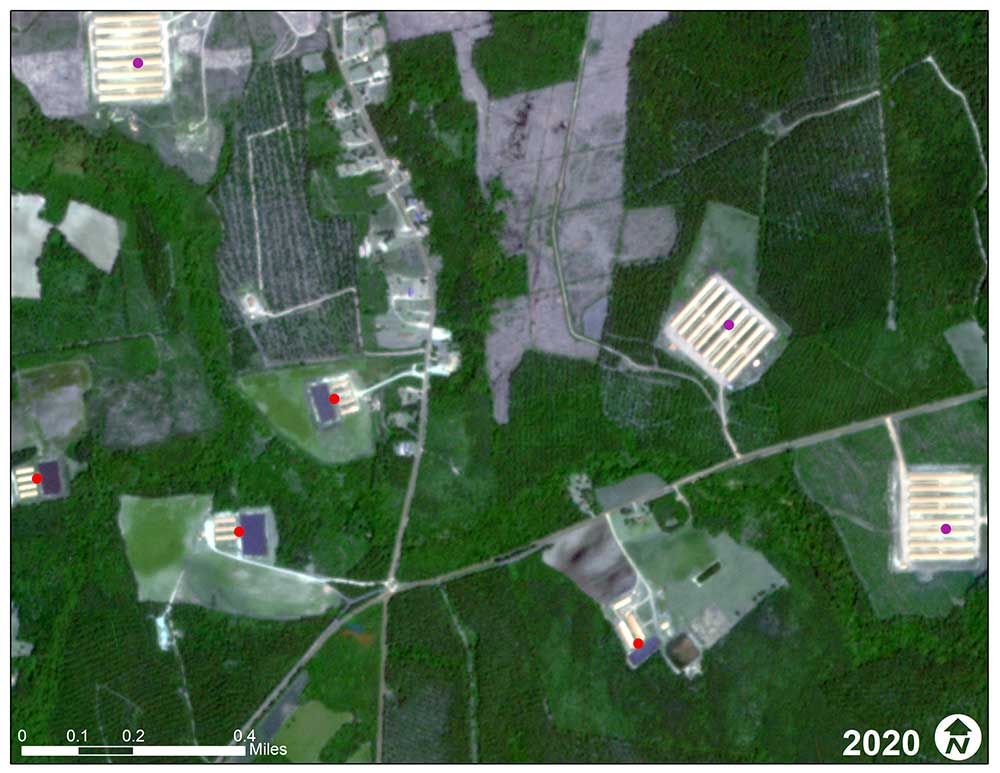 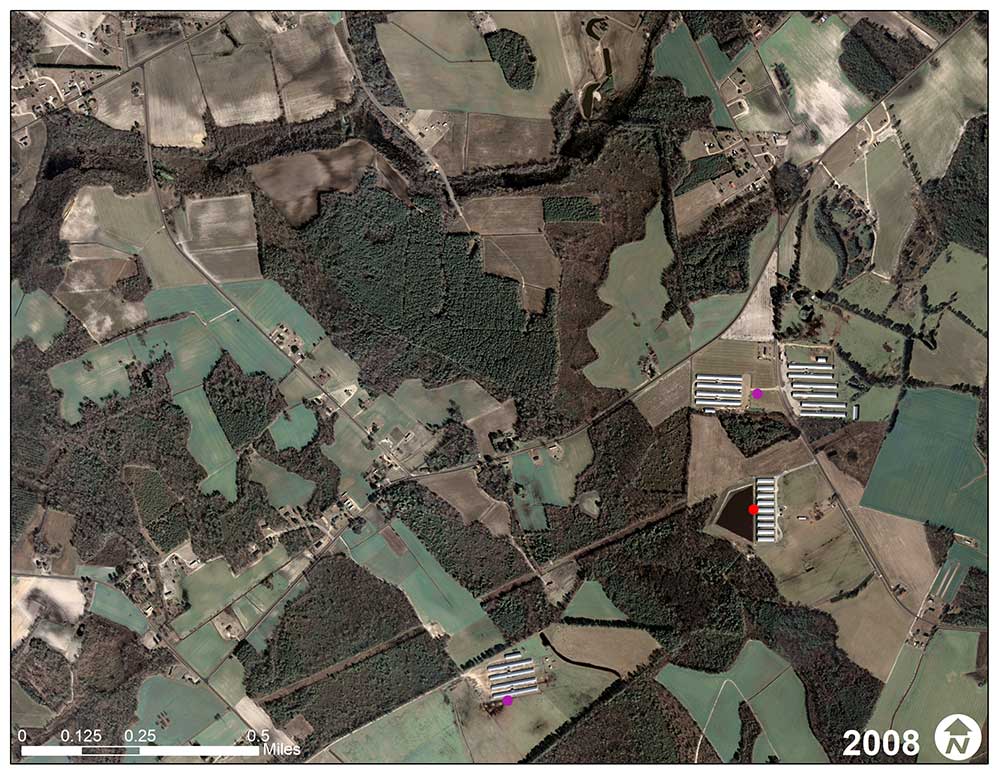 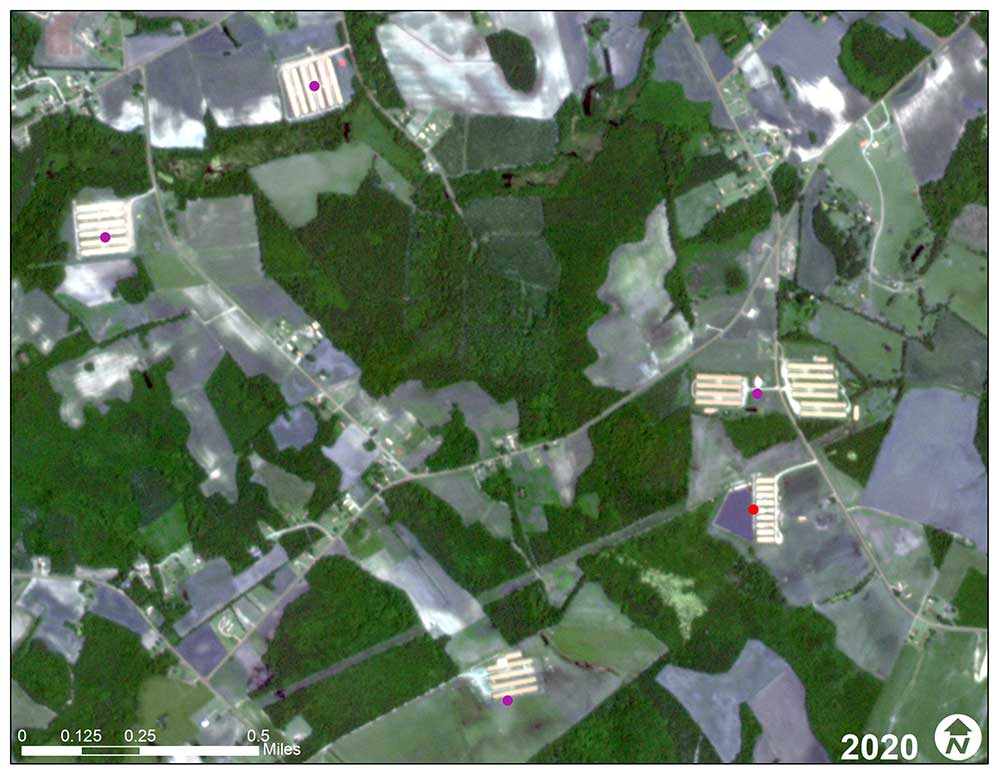 To protect the health of all of its residents, but especially those who already bear disproportionate burdens from industrial animal agriculture, North Carolina must address the rampant proliferation of poultry CAFOs. The state’s regulatory and legislative bodies must act to address the significant, increasing and unjust harm they have inflicted on North Carolina’s communities of color – particularly in Duplin, Sampson and Robeson counties.

State regulators must also rectify the longstanding lack of oversight of these operations, starting with studying where they are and how they’re managing their waste. The state should also forbid new operations from opening in flood-prone areas and do more to improve how poultry waste is managed.

2 Asian, Native Hawaiian or Other Pacific Islander; Some Other Race; or Two or More Races.

Special thanks to Sarah Porter, Ethan Bahe, Christian Breen, Will Hendrick and the following organizations:

Data on the interactive map represent estimates of locations and statistics used in an attempt to accurately document poultry feeding operations, permitted swine and cattle operations and their impact on the landscape. The Environmental Working Group and Waterkeeper Alliance assume no responsibility for locational accuracy, errors or omissions represented on the maps.

This dataset was created by surveying satellite imagery of North Carolina from 2019 (RapidEye 5m, Planet Scope 3m and North Carolina Orthophotography). Poultry operations were identified by distinctive clusters of long, metal barns with attached feed canisters. For each identified operation, we recorded a location and a count of barns.

Identified operations were checked for accuracy using 3-meter-resolution satellite imagery of North Carolina from 2019 (Planet Scope). Locations were not included if they appeared to be abandoned – for instance, locations where barns had no feed canisters, had dilapidated roofs or were overgrown.

Operations were dated by comparing them to previous years’ imagery and recording the earliest year in which the operation is visible. Previous imagery was from the National Agriculture Imagery Program from 2008, 2012, 2016, 2018 and 2019, so the establishment of these operations can only be dated approximately to one of these years.

Data for swine and cattle operations were taken directly from the List of Permitted Animal Facilities (11-6-2019), compiled by the North Carolina Department of Environmental Quality.

To account for redundant facility locations, points were moved atop distinct barn locations to accurately portray spatial proximity to the 100-year floodplain and overlapping census blocks. The locations of facilities were also moved if they appeared within a noticeable distance from the actual facility location. If a facility location had multiple permits associated with only one point, a new location point was created and attributed if an adjacent facility existed.

To estimate poultry animal counts, an average square footage per bird was used and then allotted to each barn, assuming a standard barn size for all poultry facilities in North Carolina. To identify a standard barn size, the 25 counties in the state with the most poultry facilities were identified, and one facility was selected at random within each of those counties.

Barn-building footprints were digitized for each selected facility, resulting in a total of 104 barns. The distribution of square footage for these 104 barns was normally distributed as shown below, with a mean barn size of 24,430 square feet. This value was assumed to be the size of every poultry barn in North Carolina.

The square footage allotted to each bird will vary depending on poultry production system – pullets, turkeys, broilers or layers. Square footage per production system was derived from industry standards and is listed in Table 1, along with the source. Broilers and pullets were combined, since a credible source for pullet square footage could not be found. In addition, pullets make up a very small proportion of total birds in North Carolina, according to the 2017 Census of Agriculture.

As the type of production system cannot be determined from aerial photography, and permit data do not exist for poultry facilities in North Carolina, the 2017 Ag Census was used to estimate the percentage of each poultry production system within each county. This by-county distribution was then applied to each facility within that county to allot bird populations, assuming a standard 24,430 square feet per barn.

The 2018 North Carolina Agricultural Chemicals Manual, or NCACM, was used to calculate manure amounts for both poultry and swine. Methods used to derive total manure, nitrogen and phosphorus values for each animal system are described below.

Permit data for swine include the production system for each swine facility, with feeder-to-finish making up more than half of all facilities in the state, followed by wean-to-feeder and farrow-to-wean (Table 2).

Manure and nutrient values were found for both anaerobic lagoon liquid and anaerobic lagoon sludge, then summed to get total manure, nitrogen and P205 values in tons per year for each facility. P205 was multiplied by 0.44 to convert to elemental phosphorus, according to guidance provided by the Midwest Planning Service Livestock Waste Facilities Handbook (MWPS-18).

Data on race, ethnicity and household were derived from the 2010 census summary file 1 at the block level and compiled by the U.S. Census Bureau. Populations categorized as “Other” are represented by the terms American Indian and Alaska Native, Asian, Native Hawaiian and Other Pacific Islander, Some Other Race and Two or More Races.