Microcystins are poisonous toxins that can form in blooms of blue-green algae. In recent years, algae blooms – actually microscopic bacteria called cyanobacteria – have erupted in hundreds of lakes nationwide, putting at risk Americans whose drinking water comes from those lakes, or who swim, ski or fish in them. If ingested, microcystins can cause adverse health effects in people and animals, ranging from skin rashes to serious illness and even death. 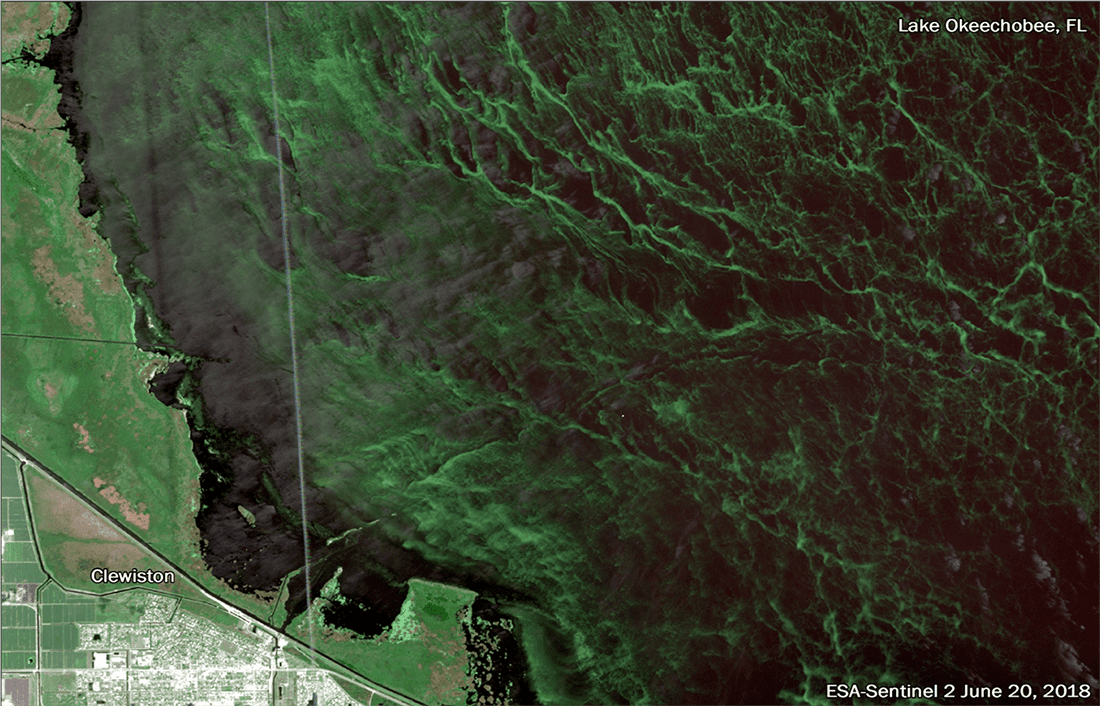 In 2014, Toledo, Ohio, became the first large city in the U.S. where tap water was rendered unsafe by microcystins, when Lake Erie, Toledo’s water source, was choked by a huge algal bloom triggered by runoff from industrial agriculture operations. For three days, half a million people were warned not to drink or bathe in their tap water.

In 2018, the threat went coast to coast. Salem, Ore.; Greenfield, Iowa; and Rushville, N.Y., all warned residents not to use tap water after detections of microcystins in their supplies. Like Toledo, all of these cities rely on surface water, like lakes, rivers and reservoirs, for drinking.

The Threat Is Real

According to the Environmental Protection Agency, 68 percent of Americans get their drinking water from community water systems that depend on lakes, rivers or other surface water.1 Protecting these sources from outside contaminants is an ongoing struggle for many public water systems. Climate change is making things worse, as scientists predict that warming waters coupled with fertilizer and manure washing off farm fields during heavier and more frequent rains may accelerate the frequency and intensity of harmful algal blooms in freshwater.2

Currently, microcystins and other cyanotoxins that develop from blue-green algae are not regulated under the Safe Drinking Water Act, but they are on the EPA’s Contaminant Candidate List, an early step toward potential future regulation.3 The EPA has also listed various cyanotoxins in the Fourth Unregulated Contaminant Monitoring Rule,4 which requires all public water systems serving more than 10,000 people, plus a representative sample of smaller systems, to test for microcystin and other cyanotoxins for two consecutive months in one year between 2018 and 2020.

In 2015 the EPA established 10-day drinking-water health advisories for microcystin at 0.3 micrograms per liter, or µg/L, for children of preschool age or younger, and 1.6 µg/L for school-age children and adults.5 The World Health Organization has established an advisory guideline of 1 µg/L for microcystin in drinking water.

When should people using a local lake be wary of microcystin? In 2016 the EPA drafted a study on “Human Health Recreational Ambient Water Quality Criteria or Swimming Advisories for Microcystins and Cylindrospermopsin” to establish advisory guidelines for recreating in water with the presence of microcystin. The study notes that some state health and environmental agencies, including those of Indiana, Ohio, Washington, Vermont and Virginia, recognize 6 µg/L6 as a public action level for recreational waters and that a handful of states have beach and lake test programs. The EPA’s 2016 draft assessment recommends a recreational or swimming advisory of 4 µg/L for microcystin. After EWG completed its survey, the EPA revised its recreational or swimming advisory in May of 2019, doubling the recommended swimming advisory to 8 µg/L. 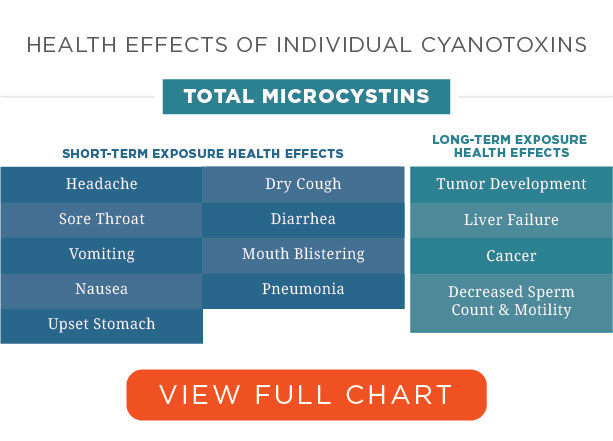 In 2007, 2012 and 2017, the EPA’s National Lakes Assessment tested for microcystin in freshwater lakes nationwide. The 2017 data are not yet available, but results from previous years show that microcystin was detected in all contiguous 48 states. The highest concentrations were found from late July to early September, peaking in August. Between 2007 and 2012, the EPA found that detections of cyanobacteria increased markedly, as samples from thousands of lakes showed an 8.3 percent rise in cyanobacteria. In 2012, the EPA found microcystin in 39 percent of all sampled lakes, up 9.5 percent from 2007.

Notably, more than 90 percent of the samples were taken only once during the assessment, and nearly a quarter of the samples were collected during May and June, when conditions are not as conducive to algae growth. The EPA data show higher monthly averages for microcystin samples collected in the late summer and early fall. In 2007, monthly averages of microcystin in August and September were five times higher than in May, June and July. In 2012, monthly averages were three times higher for August and September compared to the earlier months.

The interactive map below shows results of the EPA tests, as well as publicly available state data, for microcystins in 2018.

Some States Are Stepping Up

In a recent EWG survey of publicly available microcystin data from states, only 20 states make their results available online or upon request. As of May 2019, Thirty states publish either an advisory for public beaches or a map of harmful algal blooms. The other 20 states only list basic information about harmful algae blooms, with no links to advisories or information about monitoring or sampling efforts.

The lack of standardized data among states makes systematic data collection and analysis extremely cumbersome. Despite these challenges, EWG was able to analyze data on tests for microcystin in public lakes in 14 states and Lake Erie for 2018 to see where and how frequently microcystin detections occurred. Eight of the 14 states – Iowa, Washington, Nebraska, Kansas, New York, Illinois, Florida and Ohio – tested regularly and accounted for 97 percent of the results. The remaining states tested only a few times a year or during an active advisory.

According to the Ohio Environmental Protection Agency, more than half of Ohioans get their drinking water from surface water. The Ohio EPA publishes and maintains one of the nation’s best monitoring programs for cyanotoxins in surface water. A stark example of the challenges Ohio communities face is in Celina, which gets its tap water from nearby Grand Lake St. Marys.

In 2018, the raw water Celina draws had an annual microcystin average of 32 µg/L – 100 times higher than the EPA’s health advisory for preschool children (Figure 2). Remarkably, the city was able to deliver clean water despite high levels of microcystin coming into the water treatment plant.

The watershed that drains into Grand Lake St Marys includes more than 40,000 acres of cropland and houses more than 100 animal feeding operations. After a heavy rain, nutrients like phosphorus and nitrogen, which run off of agricultural fields saturated with fertilizer and manure, can drain into the shallow lake and accelerate the growth of algae in the water. The image below shows rivers emptying sediment and nutrient pollution into Grand Lake St Marys after a heavy spring rain (Figure 3). 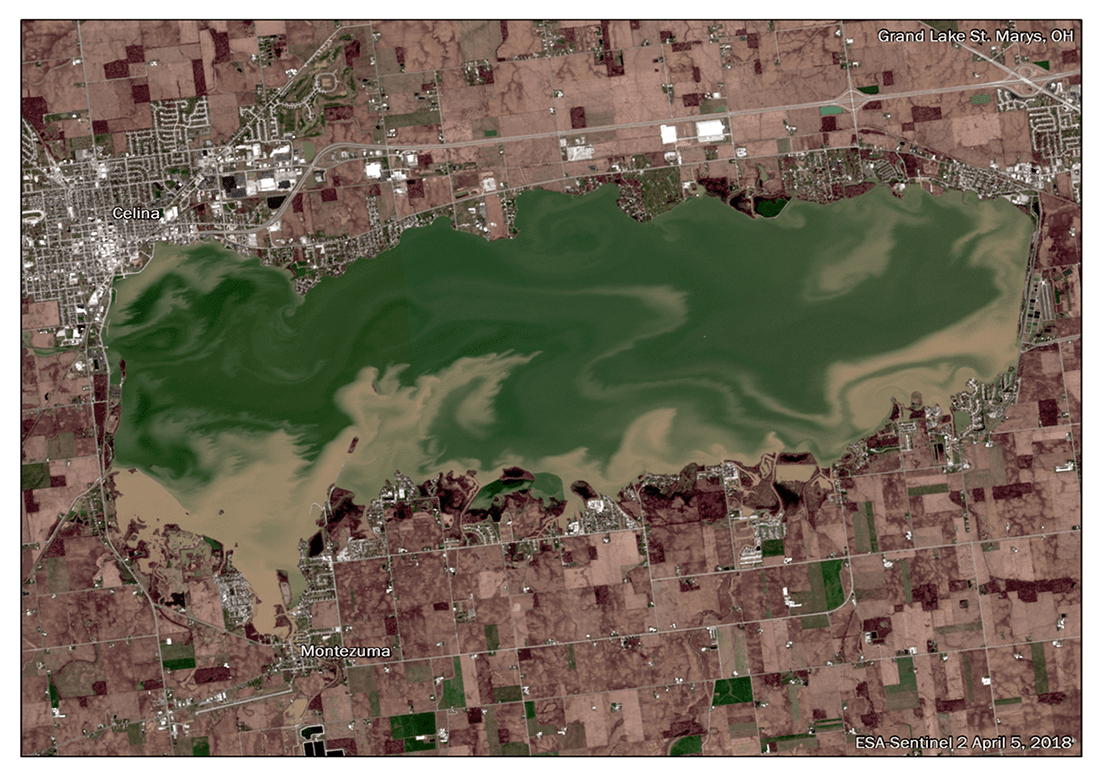 Microcystin levels in Grand Lake St Marys are so high, they can even be detected in fish caught in the lake.7 EWG’s findings show that microcystins are found in many public lakes throughout the continental U.S. However, many states either do not monitor for microcystins or do not disseminate the results of detections. In these states, action is triggered only in response to citizen complaints.

People should feel secure knowing that the water they depend on is safe. While we wait for the government to respond to this worsening issue, millions of Americans are left to drink or swim at their own risk.