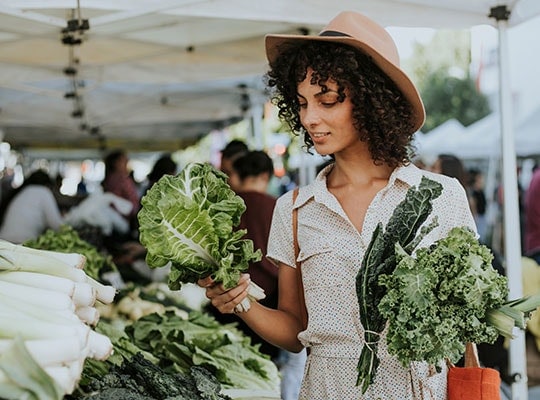 This year’s version of the guide, which analyzes the latest test data from the Department of Agriculture and Food and Drug Administration, also reveals that over 50 percent of potatoes, spinach, lettuce and eggplant had detectable levels of at least one of three bee-killing neonic insecticides banned in the European Union but still allowed for use on U.S. produce.

A critical part of a healthy diet includes a combination of fruits and vegetables, regardless of how they are grown. But anyone worried about consuming potentially harmful pesticides should know that many are found on many fruits and vegetables, even after they are washed, peeled or scrubbed, which the USDA does before testing.

The goal of EWG’s Shopper’s Guide to Pesticides in Produce, released every year since 2004, is to educate the public about fruits and vegetables with the highest and lowest pesticide residues so consumers can make the best decisions for their families.

The guide includes EWG’s Dirty Dozen™ and the Clean Fifteen™, two lists that provide a quick consumer reference about the most and least contaminated produce.

Numerous peer-reviewed scientific studies have shown that consuming produce high in pesticide residue, like the items on our Dirty Dozen list, increases the risk of certain negative health impacts, and that choosing organic can almost immediately reduce the amounts of residues in a person’s body.

Recent research from Harvard University shows that consuming fruits and vegetables with high levels of pesticide residues may decrease the beneficial effects of fruit and vegetable consumption, including protection against cardiovascular disease and mortality.

EWG’s 2022 Shopper’s Guide to Pesticides in Produce combines data from USDA and FDA tests from 2020 and nine years earlier, with the exception of pineapple data, which is from 2002. The newest data released by the agencies included results of tests of nearly 45,000 samples of produce. The USDA does not test every type of produce every year.

The USDA also does not test fruits and vegetables for all pesticides used in crop production. For example, glyphosate is the most heavily used pesticide in the U.S., and it can be found in high levels on several grains and beans, such as oats and chickpeas. But the USDA has not analyzed these crops for glyphosate. This is troubling, because tests commissioned by EWG found almost three-fourths of popular oat-based food samples, including many popular with children, had pesticide residue levels higher than what EWG scientists consider protective of children’s health.

Read more here about EWG’s research into glyphosate on these foods.

As in previous years, several pepper samples contain concerning levels of pesticides that can harm the nervous system, including oxamyl, acephate and chlorpyrifos – carbamate and organophosphate insecticides banned from use on some U.S. crops and entirely in the EU.

Last year, the Environmental Protection Agency moved ahead with a long overdue ban of chlorpyrifos on food crops. Any future detections of chlorpyrifos will indicate uses that violate this ban.

This year we removed three vegetables from the Clean Fifteen: broccoli, cauliflower and eggplant. That’s because they hadn’t been tested by the USDA in six, seven and 14 years, respectively

As a result, mangoes, watermelon and sweet potatoes were added to the Clean Fifteen. 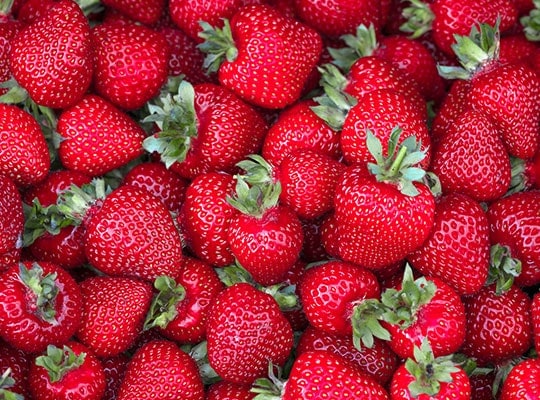 
Of the 46 items included in our analysis, these Dirty Dozen foods were contaminated with more pesticides than other crops, according to our analysis of USDA data.1 (The rankings are based not only on the percentage of samples with pesticides but also on the number and amount of pesticides on all samples and on individual samples. See Methodology.) 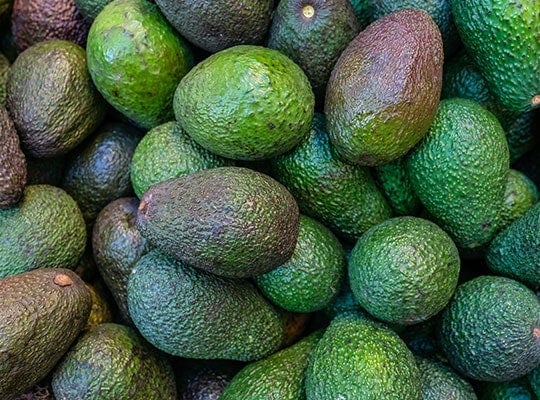 
These 15 items had the lowest amounts of pesticide residues, according to EWG’s analysis of the most recent USDA data.1

Organic standards prohibit the use of synthetic pesticides, among other things. Eating organically produced food reduces pesticide exposure and is linked to a variety of health benefits, according to multiple studies, especially findings from a large study in France.2,3

Clinical trials continue to show that people who switched from conventionally grown to organic foods saw a rapid and dramatic reduction in their urinary pesticide concentrations, a marker of pesticide exposure. 4

Researchers from Harvard University used USDA test data and methods similar to EWG methodology to classify produce as having high or low pesticides. 7 And the lists of high- and low-pesticide crops from the Harvard University study largely overlap with EWG’s Dirty Dozen and Clean Fifteen.

The Harvard researchers also found that people who ate greater quantities of crops high in pesticides had higher levels of urinary pesticides and lower fertility.7,8 People who ate a pro-fertility diet, which included the low-pesticide crops, among other foods and nutrients, like whole grains and folic acid, were more likely to have a successful pregnancy.9

People who eat higher amounts of organic produce tend to be more health-conscious, making it difficult to determine the exact cause of an observed positive health outcome.

In 2012, the American Academy of Pediatrics issued an important report that said children have “unique susceptibilities to [pesticide residues’] potential toxicity.” The organization referred to research that linked pesticide exposures in early life to pediatric cancers, decreased cognitive function and behavioral problems. It advised members to urge parents to consult “reliable resources that provide information on the relative pesticide content of various fruits and vegetables.” A key resource it cited was EWG’s Shopper’s Guide to Pesticides in Produce.10

An EWG investigation published in 2020 found that for most pesticides, the EPA does not apply additional restrictions to safeguard children’s health. The landmark 1996 Food Quality Protection Act required the EPA to protect children’s health by applying an extra margin of safety to legal limits for pesticides in food. Yet as EWG’s investigation found, this tenfold margin of safety was not included in the EPA’s allowable limits for almost 90 percent of the most common pesticides. 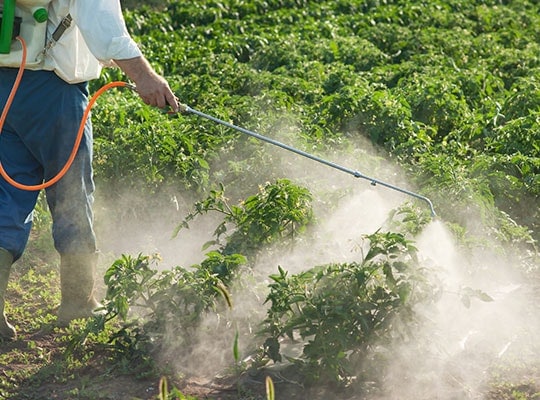 Genetically engineered crops, also known as genetically modified organisms or GMOs, are most commonly found in processed foods rather than in fresh produce. Corn syrup and corn oil, produced from predominantly GMO starchy field corn, are commonly found in processed foods. However, you may find genetically modified zucchini, yellow squash, sweet corn, papaya and apples in U.S. markets, though only papayas are predominantly GMO.

Under a law passed in 2016, beginning this year, some GMO food products in the U.S. must be labeled. But because of the final rule, released in 2018, these labels may be difficult to interpret, with confusing terms like “bioengineered.” Consumers who want to avoid GMOs may choose organic zucchini, yellow squash, sweet corn, papaya, apples and potatoes. Processed goods that are certified organic or bear Non-GMO Project Verified labels can also be trusted to be GMO-free.

The federal government’s role in protecting our health, farm workers and the environment from harmful pesticides urgently needs reform. U.S. pesticide regulation, monitoring and enforcement is scattered across multiple federal and state agencies. In 1991 the USDA initiated the Pesticide Data Program and began testing commodities annually for pesticide residues, but EWG remains concerned about pesticide regulation and oversight in the U.S.

The USDA states that a goal of its tests is to provide data about pesticide residues in food, with a focus on those most likely eaten by infants and children. No commodities are tested annually, but some – including baby food, last tested in 2013, and baby formula, last tested in 2014 – are tested particularly infrequently. Additionally, some pesticides are not tested, including glyphosate — despite its being the most widely used pesticide in the U.S.

It falls chiefly to the EPA to decide which pesticides are approved for use in the U.S., including what conditions are placed on their approval and setting the pesticide residue levels on foods and crops. But primary enforcement authority for pesticide use on farms is left to states, and the responsibility for testing foods to determine dietary exposures to pesticides is divided between the USDA and the Food and Drug Administration. But neither the USDA nor the FDA regularly tests all crops and produce for pesticide residues, nor do the programs test for all pesticides commonly used in agriculture.

The pesticide registration process requires companies to submit safety data, proposed uses and product labels for approval by the EPA. But the EPA does not test pesticides independently. Nor does its review fully capture the risks posed by pesticides, because of limitations in available data and failures in risk assessments, such as the exclusion of synergistic effects. This is concerning, because scientists have found that the combination of two or more pesticides can cause greater toxicity than the use of the pesticides individually.

To protect public health, and especially children’s health, from pesticides, EWG has called on President Joe Biden to ban or restrict some of the most harmful pesticides still used today .

One particularly dangerous pesticide is chlorpyrifos, which scientists have definitively linked to brain damage in children and fetuses. EWG and other public health advocacy organizations have spent more than a decade urging the Environmental Protection Agency to prohibit chlorpyrifos from being applied to food crops.

For decades, chlorpyrifos was used on many fruits and vegetables, while the conventional agriculture and pesticide industries repeatedly downplayed the dangers it poses to both children and farmworkers.

In 2021, the EPA finally banned all uses of chlorpyrifos on crops grown for food. In a last-ditch unsuccessful effort to keep the neurotoxic pesticide legal for use on fruits and vegetables, several groups representing conventional growers sought to block the ban. They included the American Farm Bureau Federation, the American Soybean Association, the Cherry Marketing Institute and the United Fresh Produce Association – one of the big agribusiness outfits that consistently attacks EWG for publishing its Shopper’s Guide and informing the public about the presence of chlorpyrifos and other pesticides on produce.

Before testing, the USDA processes each piece of fruit or vegetable in the same way people tend to do at home. For example, those with inedible peels are peeled, and those with edible peels are rinsed under cold water and drained before they are tested. Therefore, the USDA test results are a good indication of consumers’ likely exposure. Unprocessed produce tends to have higher concentrations of pesticides, as shown by California Department of Pesticide Regulation test results.

Within each of these categories, we ranked the 46 fruits and vegetables and then normalized the ranks on a scale of 1 to 100, with 100 being the highest. For each food, we calculated a total score by summing the normalized rank from each metric. All categories are weighted equally, since they convey different but equally relevant information about pesticide levels on produce.

The USDA test program includes both domestically grown and imported produce, and sometimes ranks differ on the basis of origin. In these cases, we displayed domestic and imported items separately to help consumers select the option with the lowest pesticide levels.

The Shopper’s Guide to Pesticides in Produce full list shows how fruits and vegetables rank based on these total scores.

It does not incorporate risk assessment into the calculations. All pesticides are weighted equally, and we do not factor in the levels deemed acceptable by the EPA. Research constantly provides new insights into the threats pesticides pose to human and environmental health. EWG designed this method to capture this uncertainty and enable consumers to reduce their overall pesticide load.

This article was adapted and updated from the 2021 Shopper’s Guide.