The average American eats about eight pounds of fresh strawberries a year – and with them, dozens of pesticides, including chemicals that have been linked to cancer and reproductive damage, or that are banned in Europe.

What’s worse, strawberry growers use jaw-dropping volumes of poisonous gases to sterilize their fields before planting, killing every pest, weed and other living thing in the soil.

USDA tests found that strawberries were the fresh produce item most likely to be contaminated with pesticide residues, even after they are picked, rinsed in the field and washed before eating. For these reasons, in 2021, strawberries are once again at the top of the Dirty Dozen™ list.

If you want to avoid pesticides and soil injected with poisonous gases, EWG advises always buying organically grown berries. We make the same recommendation for other Dirty Dozen foods.

The facts about strawberries and pesticides come from the USDA’s Pesticide Data Program. Between January 2015 and October 2016, USDA scientists tested 1,174 batches of conventional strawberries – about 89 percent of which were grown in the U.S., with the rest coming from Mexico, except one, which came from the Netherlands.

The USDA’s strawberry tests found that:

How hazardous are the chemicals used on strawberries? Some are fairly benign. But others are linked to cancer, reproductive and developmental damage, hormone disruption and neurological problems. Among the dangerous varieties are:

As disturbing as these results are, they do not violate the weak U.S. laws and regulations for pesticides in food.

Only about 5.6 percent of the strawberries sampled in 2015 and 2016 had levels of pesticide residues considered illegal. Of these samples, 28 had pesticide levels that exceeded the “tolerance level,” or legally permissible level set by the EPA. Forty samples contained pesticides illegal for use on strawberries.

The EPA’s tolerance levels are too lenient to protect public health. They are a yardstick to help the agency’s personnel determine whether farmers are applying pesticides properly. The levels were set years ago and do not account for newer research showing that toxic chemicals can be harmful at very small doses, particularly when people are exposed to combinations of chemicals.

If pesticide tolerance levels were set to protect the health of children, who are more vulnerable than adults, more fruits and vegetables would fail to meet EPA standards. The current EPA pesticide tolerances are like having a 500-mph speed limit: If the rules of the road are so loose that it’s impossible to violate them, no one can feel safe.

Fresh strawberries were once a seasonal treat, available in limited supply for a few spring and summer months only. In recent decades, the increased use of pesticides and other chemically aided growing methods have made cheap strawberries available all year. Meanwhile, aggressive marketing of fresh strawberries has spurred consumption – today the average American eats about four times more per year in the U.S. than in 1980.

But only about 20 percent of the chemicals used on California strawberries were pesticides that can leave residues on harvested fruit. The other 80 percent – more than 9.3 million pounds in 2015 – were fumigants, which are poisonous gases injected directly into the ground to sterilize the soil before planting.

Fumigants are acutely toxic gases that kill every living thing in the soil. Some were developed as chemical warfare agents, now banned by the Geneva Conventions. After growers inject fumigants, they cover the fields with plastic tarps to keep the gas underground and away from people and animals. But fumigants can leak during application and from torn tarps, sending the deadly fumes adrift and endangering farm workers and people who live nearby.

The most notorious strawberry fumigant is methyl bromide. In 1987, an international treaty banned it because it destroys the Earth’s protective ozone layer. But for almost 30 years, U.S. strawberry growers have fought for so-called critical use exemptions from the EPA, and they were granted access to decreasing amounts of the chemical over the past several decades. The year 2017 was the first time strawberry farmers were not allowed to use methyl bromide. Strawberry expert Julie Guthman, a professor of social sciences at the University of California, Santa Cruz, reported that California growers had not given up strawberry production but had simply shifted to using other licensed fumigants.

And the newer soil fumigants replacing methyl bromide are also hazardous. These include chloropicrin, the active ingredient in tear gas, and 1,3-dichloropropene, a carcinogen sold by Dow Chemical Company as Telone. The EU has banned both.

In 2014, the Center for Investigative Reporting revealed how Dow lobbied for and won a loophole to allow California strawberry growers to double their annual use of Telone. As a result, more than a million Californians were exposed to higher concentrations of Telone than was previously considered safe, according to the center. The same year, a state study found that chloropicrin in the air in Watsonville, a rapidly growing city in the heart of the California strawberry belt, exceeded the state’s safety standard by 40 percent.

The organic alternative to fumigation combines the traditional tool of crop rotation, meant to control the buildup of pests and pathogens, with a new technology that’s akin to composting. Growers mix a carbon-rich material such as rice bran or molasses into topsoil, which is then saturated with water and covered with a plastic tarp. Under the tarp, the organic slurry gives off natural byproducts that are toxic to pathogens.

This method works as effectively as fumigation, with growers that use it reporting almost no loss in crop yield. It’s also more expensive, driving up the cost of organic strawberries – which are more than $3 a pound in the store, compared to about $2 a pound for the conventional variety. As more growers turn away from pesticides and fumigants, the price of organic produce is expected to drop.

For those of us who don’t want to eat pesticide residues and who want to stop fumigants from endangering farmworkers and neighbors of farms, the cost of organic produce is a small price to pay. The transformation of strawberries from an occasional treat to a cheap and abundant supermarket staple should serve as cautionary tale about the consequences of chemically driven industrial agriculture.

This article was adapted and updated from the 2017 Shopper's Guide to Pesticides in Produce™. 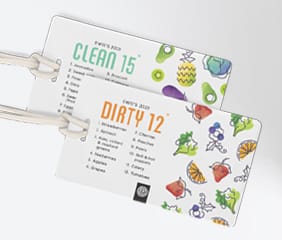 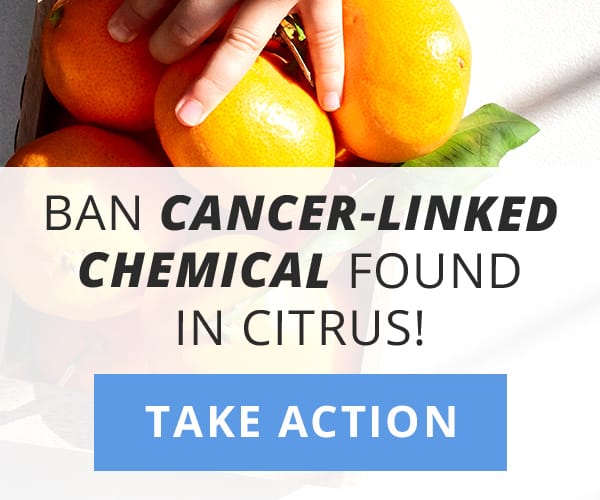