The study, published by the prestigious Journal of the American Medical Association, is the first investigation to document changes in brain glucose metabolism after cell phone use. In a video accompanying the report, Volkow said the team focused on how the brain consumes glucose because "It's a very sensitive marker to indicate if there are changes in brain activity that may be driven by a given stimulus, which in this case was the cell phone."

The conclusion, according to Volkow: "Even though the radio frequencies that are emitted from current cell phone technologies are very weak they are able to activate the human brain to have an effect."

"This research offers an important insight into potential effects of cell phone radiation on the human brain," Renee Sharp, director of the Environmental Working Group California office said. "It joins the growing list of studies that have raised concerns about cell phone use and the brain."

Cell phone radiation can change brain activity
Video produced by the Journal of the American Medical Association features Dr. Nora Volkow, a pioneer in the field of brain imaging, explaining how she and a team from the National Institutes of Health and Brookhaven National Laboratory investigated the impact of cell phone radiofrequency emissions on the brain. "We really know relatively little about the potential effects that cell phone technologies may have on how the brain works," Volkow says. To find out, researchers fixed cell phones to 47 volunteers' heads, then made PET scans of metabolic shifts in their brains. See the experiment here. Video source: JAMA

The study's authors, who are affiliated with the National Institute on Drug Abuse, the National Institute on Alcohol Abuse and Alcoholism and Brookhaven National Laboratory, wrote that "these results provide evidence that the human brain is sensitive to the effects of RF-EMF [radiofrequency-modulated electromagnetic fields] from acute cell phone exposures." Volkow is recognized for using imaging to explore changes in the brain linked to addictive drugs, obesity, attention-deficit disorder and aging.

The research team explored the impact of cell radiation on the brain by placing cell phones on both ears of 47 healthy volunteers. The volunteers, seated in a darkened room, were directed to keep their eyes closed and remain still for 50 minutes. On the first day, both phones were turned off. On the second day, one was turned on. 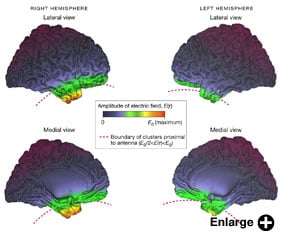 The volunteers' brains were subjected to positron emission tomography, commonly known as PET scans, a medical imaging technology, to measure glucose metabolism. "Compared with no exposure, 50-minute cell phone exposure was associated with increased brain glucose metabolism in the region closest to the antenna," the study said.

The exact mechanism underlying these metabolic effects and their human health significance are still under investigation. Volkow and her colleagues theorized that the changes they observed could be due to "cell membrane permeability, calcium efflux, cell excitability, and/or neurotransmitter release." Significantly, they rejected the hypothesis that the changes were caused by tissue heating. This finding places them at odds with the cell phone industry, which acknowledges no effects but heating when the brain absorbs cell phone radiation.

While scientists continue investigating the question, EWG recommends cell phone users limit their exposure to cell phone radiation by taking easy steps such as getting a headset, using speaker-phone mode, keeping the phone away from their body, and looking for low-radiation phone models. Click for more tips https://www.ewg.org/cellphoneradiation/8-Safety-Tips