Dust storms have re-emerged across much of Kansas, Oklahoma, Colorado and Texas, fueled by the same combination of persistent drought, plowing up fragile land and poor public policy that led to the Dust Bowl years of the 1930s.

From 2008 to 2012, high crop prices driven in part by government biofuel mandates, coupled with over-subsidized crop insurance policies, encouraged farmers to put more than 5.3 million acres of highly erodible land under the plow despite the drought that continues to plague the plains.

The return of “black blizzards” in parts of Kansas, Oklahoma, Colorado, Nebraska and Texas should be no surprise. These five states account for approximately 42 percent (2.2 million acres) of the total area converted to row crops nationwide over that five-year period, an Environmental Working Group analysis shows. Taking a closer look, the USDA Farm Service Agency recently studied new crop plantings just on lands that had never previously been farmed, and it found that in the single year 2011-2012 those same five states accounted for 29 percent (114,000 acres) of the formerly pristine acreage that went under the plow.

The re-appearance of dust storms has set off alarm bells, and scientists unraveling the effects of climate change fear that another “Dust Bowl” could be on the way.

Click on this map to see how the locations of many reported dust storms conform to the areas where highly erodible land was converted to row crops over the last four years, as documented by EWG's Going, Going, Gone! report. 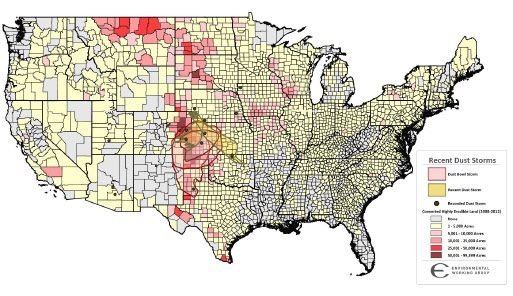 Congress Can Prevent the Next Dust Bowl

Congress will soon decide whether to include in the farm bill the Senate-passed proposal that would require landowners who receive generous federal crop insurance subsidies to take basic steps to protect fragile land from blowing away.

House Agriculture Committee Chairman Frank Lucas – who represents the parts of Oklahoma that were hit hardest by the Dust Bowl and frequently cites that era as a cautionary tale – has told reporters that he wants “to make sure the mistakes that inflicted such pain on my grandparents’ and parents’ generations" never happen again. Yet Rep. Lucas continues to oppose the simple conservation quid pro quo adopted in the Senate farm bill.