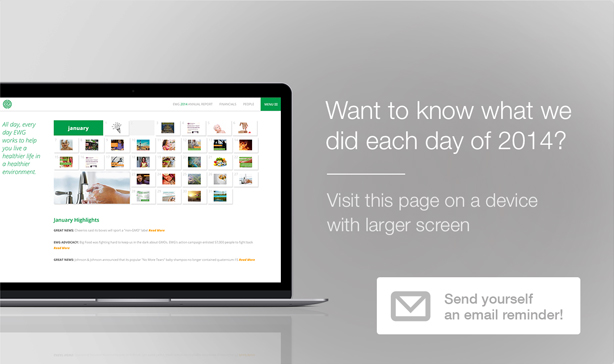 Meanwhile EWG's action campaign against the DARK Act, which would prohibit mandatory GMO labeling at the federal, state and local level, was the biggest performer of the year, garnering more than 61,000 signatures. Our supporters agree with the chefs - they, too, want GMO labeling! Read More

GREAT NEWS: President Obama signed the Sunscreen Innovation Act, which will expedite FDA's review of highly effective active ingredients that have long been used in sunscreens sold in Canada and Europe - but are not available in the U.S. The law will alleviate the logjam at the agency, which has longstanding backlog of new ingredients awaiting review, and should finally give Americans access to products that can better protect them from the dangers of sun exposure. Read More